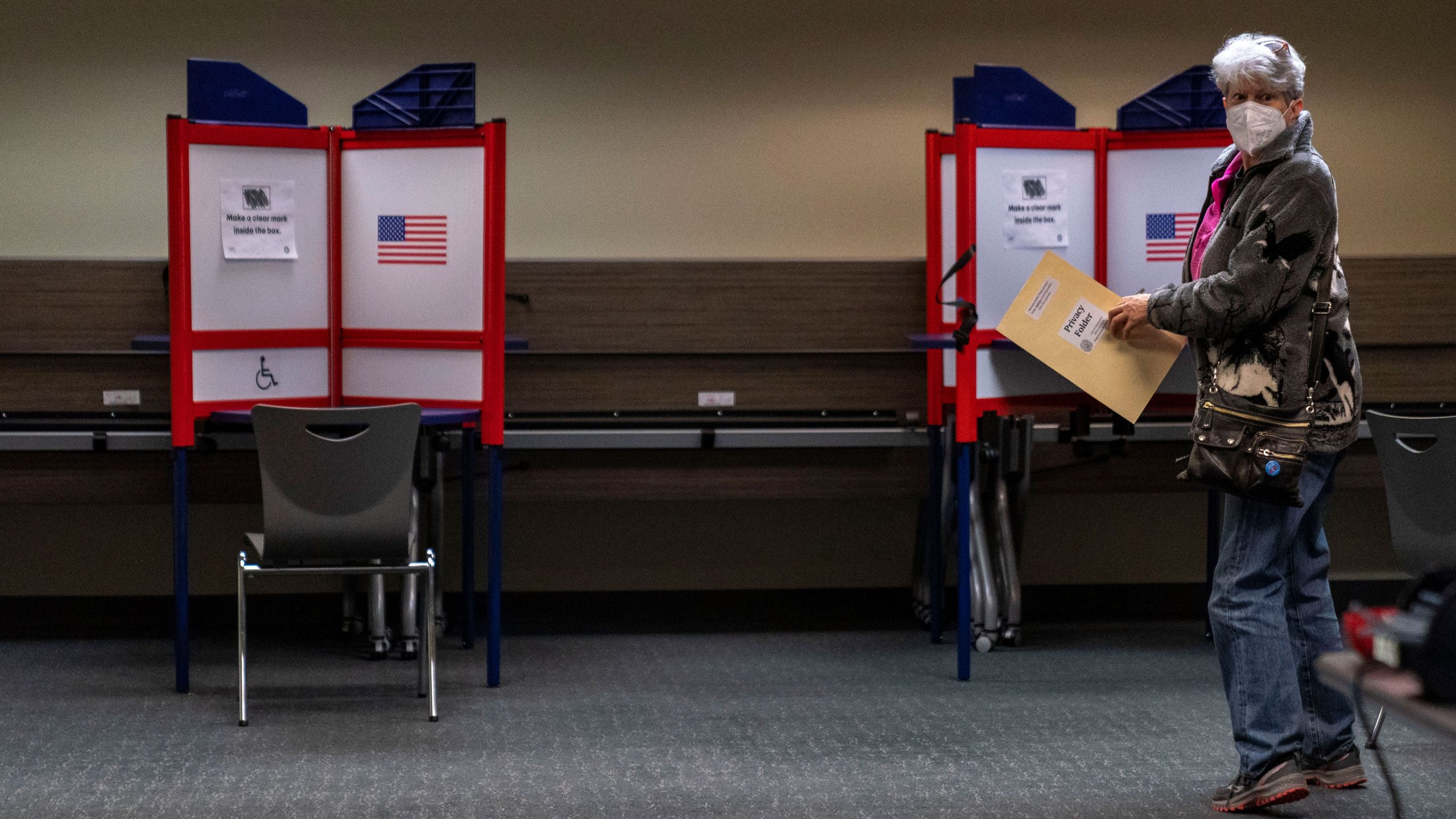 Federal officials are warning ahead of the November midterms that Russia is working to amplify doubts about the integrity of U.S. elections while China is interested in undermining American politicians it sees as threats to Beijing’s interests.

An unclassified intelligence advisory, newly obtained by The Associated Press, says China is probably seeking to influence select races to “hinder candidates perceived to be particularly adversarial to Beijing.” In the advisory, sent to state and local officials in mid-September, intelligence officials said they believe Beijing sees a lower risk in meddling in the midterms versus a presidential election.

While officials said they’ve not identified any credible threats to election infrastructure in the U.S., the latest intelligence warning comes amid the peak of a midterm campaign in which a rising number of candidates and voters openly express a lack of confidence in the nation’s democratic processes.

Foreign countries have long sought to sway public opinion in America, perhaps most notably in a covert Russian campaign that used social media to sow discord on hot-button social issues ahead of the 2016 presidential election. The U.S. government has been on high alert since, warning about efforts by Russia, China and Iran to meddle in American politics and shape how voters think.

Kathie Hoekstra arrives to vote in Alexandria, Va., Monday, Sept. 26, 2022. In-person voting for the midterm elections has started in Minnesota, South Dakota, Virginia and Wyoming, in a landscape that has changed since the pandemic drove a shift to mail balloting in the 2020 presidential contest. (AP Photo/Andrew Harnik)
(AP Photo/Andrew Harnik)

The U.S. faces foreign influence campaigns while still dealing with growing threats to election workers domestically and the systematic spread of falsehoods and disinformation about voter fraud. Former President Donald Trump and many of his supporters — including candidates running to oversee elections in several states — continue to lie about the 2020 presidential election even as no evidence has emerged of significant voter fraud.

“The current environment is pretty complex, arguably much more complex than it was in 2020,” Jen Easterly, director of the Department of Homeland Security’s cybersecurity arm, told reporters Monday.

Russia is amplifying divisive topics already circulating on the Internet — including doubts about the integrity of American elections — but not creating its own content, said a senior FBI official who briefed reporters Monday on the condition of anonymity under terms set by the bureau.

Overall, the official said, China’s efforts are focused more on shaping policy perspectives, including at the state and local level, rather than on electoral outcomes.

RECORD REQUESTS BASED ON 2020 ELECTION FRAUD BELIEF SURGES IN OREGON

Jean Pogue, who turns 100 this month, says she likes going to vote because, “you get to go to one of those little booths and you look at that fancy ballot.”
(FOX40)

Still, China appears to have focused its attention on a “subset of candidates” in the U.S. it sees as opposed to its policy interests, the official explained. In one high-profile case, the Justice Department in March charged Chinese operatives in a plot to undermine the candidacy of a Chinese dissident and student leader of the Tiananmen Square protests in 1989 who was running for a congressional seat in New York.

The briefing Monday came weeks after DHS distributed an advisory that described China’s approach during this midterm as different from the 2020 election, when the intelligence community assessed that China considered but did not deploy efforts to influence the presidential election.

There were publicly revealed examples during the last presidential election of influence campaigns originating in China. Facebook in September 2020 took down pages that posted what it said was a “small amount of content” on the election; that effort focused primarily on the South China Sea.

The DHS advisory doesn’t list specific races or states where it thinks China-linked actors might operate, but cites the March indictment alleging efforts to undermine the New York congressional candidate. It also suggests China’s interest in politics extends beyond the U.S., saying Australian intelligence since 2017 has scrutinized Chinese government attempts to support legislators or candidates, including those who have amplified Beijing’s stances on select issues.

A Kentucky Democrat put in ad in a publication appearing to depict a lynching.
(AP)

Chinese and Russian officials and state media have historically rejected U.S. allegations of election meddling and pointed in turn to American influence efforts in other countries.

State and local governments are limited in what they can do against influence campaigns, given that “their job isn’t to police political conversation,” said Larry Norden, an election security expert with the Brennan Center for Justice.

“I do think there is a lot voters should be doing,” he added. “If they are seeing messages about candidates presented in an alarmist or emotionally charged way, their radar should be going up. They should be checking the accuracy of claims, and if they are seeing false claims, they should be letting the social media companies know.”

ATLANTA, GEORGIA – MAY 24: People use voting machines to fill out their ballots as they vote in the Georgia primary at the Metropolitan Library on May 24, 2022 in Atlanta, Georgia.
(Photo by Joe Raedle/Getty Images)

Scott Bates, the deputy secretary of state in Connecticut, noted that election officials in the state had responded to warnings about foreign influence dating back to 2016.

“Our best defense is to have an educated populace,” he said.

“The election process, we can protect that,” he said. “If you’re talking about talking trash about a candidate, we’re not in the business of patrolling that.”

Nineteen foreign nationals have been charged with illegally voting in the 2016 election, the Justice Department said Friday.
(Reuters)

Some signs of influence operations from Russia and China are already public.

Meta, which owns Facebook and Instagram, said in late September that it disabled a sprawling disinformation network coming from Russia involving sham news websites and hundreds of fake social media accounts. Researchers also exposed a much smaller network originating in China that was intended to spread divisive political content in the U.S., but reached only a tiny audience.

Officials at the FBI and DHS said Monday they were not aware of any credible threat to election infrastructure. A senior FBI official said that though officials were not tracking any specific effort by a foreign government to hack election equipment, they were nonetheless concerned that an adversary could spread exaggerated or false claims of compromise to undermine confidence in the elections.

Besides concerns about cybersecurity and foreign influence campaigns, the FBI is increasingly focused on physical threats to election workers.

The FBI created a task force in the summer of 2021 to deal with an influx of threats to election security workers. Since then, it has received and reviewed more than 1,000 reports of harassing communication. Most of the harassment came from email, phone calls and social media, and the majority primarily originated in states where there were ongoing audits of election results.

Of those tips, about 11% met the threshold of a potential federal crime. The task force has made four arrests, the FBI said. Officials cited constitutional barriers in bringing more cases because of the First Amendment’s strong protection of an individual’s political speech.