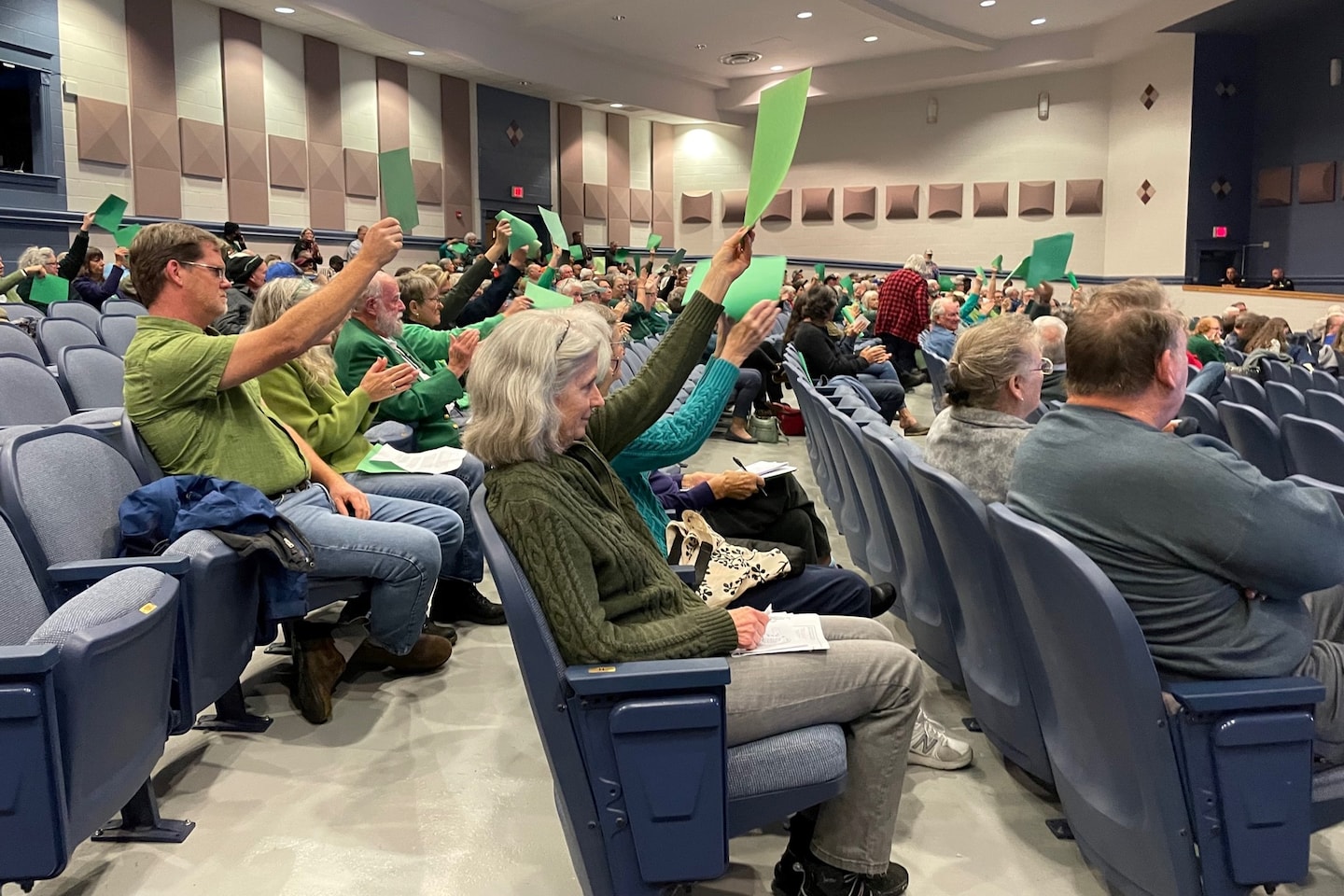 MATHEWS, Va. — Mary Sampson finally got fed up after hearing members of the Sons of Confederate Veterans urge county supervisors to deed part of the historic courthouse green to a private group so it could protect the local Confederate monument from mobs and anarchists.

Sampson, one of a handful of Black people among hundreds of residents who packed a high school auditorium here Tuesday night for a public hearing, testified that she was tired of seeing gun-toting SCV members patrolling a statue that has never been vandalized or threatened.

Unlike previous meetings where the pro-Confederate side seemed to be the loudest, much of the crowd roared in support for Sampson. Many wore green or waved green sheets of paper to send a message to the supervisors: Keep the courthouse green intact.

After more than two and a half hours of impassioned public comment on both sides of the issue, the supervisors took no action and said they wanted to give it more thought. But the hearing made clear that the county’s move to consider such an unusual step, which apparently would be a first for Virginia, has had the side effect of uniting a disparate group of local residents in opposition.

“It’s people that we see in various circles and things like that, but there’s never been a political coalition built together with them,” said Sheila Crowley, a local Democrat who helped organize the group in this rural community of 8,600 where only 8 percent of the population is Black. “It was amazingly organic.”

Republicans and Democrats; White and Black residents; younger people and retirees — about 30 people gathered on a Zoom conference call on Saturday and spent two hours strategizing ahead of Tuesday’s meeting, Crowley said.

Many were among the 80 percent of voters who favored keeping the statue in a county referendum last year, but who oppose the idea of deeding a historic slice of public land to a private entity.

“I voted to keep the statue,” said Rob Quartel, a member of the local Republican committee who joined the weekend video conference and said his ancestors fought for the Confederacy.

County supervisors have spent all year teasing the idea of deeding the monument to a private group after the SCV offered to take it on. Late last month, the board voted to waive county subdivision requirements to make it possible to carve a very small plot of public land — 21 feet by 22 feet — from the courthouse green, which was established in 1791.

The county also drew up a draft deed for transferring the plot — and the generic statue of a Confederate soldier on a column that stands atop it — to a group formed in September called the Mathews War Memorial Preservation Inc. for the sum of $10. That group would be responsible for maintaining and defending the statue forever, subject to some restrictions, such as not flying Confederate flags around it.

State records show the preservation group was created by David M. “Sonny” Fauver, a county resident and member of the SCV who has often spoke at meetings in favor of giving away the property to protect it. At Tuesday night’s hearing, Fauver declined to answer questions about the group or whether it has any other members.

“I have no intention of speaking about it,” he said to a reporter, then turned and walked away.

During the public hearing, though, Fauver told the board that the monument is clearly in jeopardy because of a 2020 law passed by the General Assembly that allows localities to take down Confederate memorials. Since then, communities across Virginia — from Fairfax to Charlottesville, Richmond to Isle of Wight County — have removed statues and disposed of them in a variety of ways, from putting them in museums to relocating them to battlefields or keeping them in storage.

“I know in my heart of hearts that that monument is in jeopardy,” Fauver said. “It cannot last if it stays in the hands of government.” He formed the preservation entity, he said, “simply to hold the deed so the law can’t destroy it. That’s it.”

Confederate defenders from Fredericksburg, Virginia Beach and Isle of Wight also warned of what they saw as the dangers of changing public attitudes about the Civil War. County resident David Callis said he wants the monument to remain in place “until Jesus Christ comes back.”

As the night wore on, the rhetoric grew more heated, with some condemning their neighbors as Marxists, thundering that President Biden is a crook and branding the “Democrat Party” a dying cabal of liars. Members of the audience wearing green “are communists,” said Doug Sweet, adding that they were “not only sadly misinformed, but you’re un-American.”

Sweet was one of two county residents who received misdemeanor convictions for their roles in the Jan. 6 insurrection at the U.S. Capitol. The other was Cindy Fitchett, who drew jeers Tuesday night for telling the crowd that Africa was to blame for slavery and that “the woke has tried to take over Mathews County, and we’re not going to allow it.”

Most of the people who spoke against deeding the statue, though, said they want to see it remain in place under public ownership. Volpe Boykin, a lawyer and SCV member who allowed Isle of Wight to move its statue to his family’s property, said he was heartened by that aspect of the debate in Mathews.

Several residents warned that the county’s economy was already taking a hit from negative outside attention, including the owner of a local bed-and-breakfast who said she’s seen a downturn because the issue is making some people feel unwelcome.

Even former Del. Harvey Morgan, a 92-year-old Republican who had a long career in the General Assembly, rose and warned the supervisors that “there’s been no public outcry to transfer public land to a private entity.”

Tom Bowen, the local commonwealth’s attorney, suggested that if the county is determined to enlist a group to protect the monument, it should do so through a lease, not a deed. The county historical society also opposes the deed, but has offered to take responsibility for the monument if the supervisors insist on that approach.

At the close of the lengthy hearing, board chairman Paul Hudgins and member David Jones said their minds are not made up about the issue, and chastised Bowen and other residents who had speculated otherwise in recent days on social media. Many residents had expected a vote Tuesday, in part because of comments Hudgins made during a Nov. 22 meeting that he regretted the statue could not just be left “like it sits” because it is “under attack.”

That threat of action, though, is what has energized a diverse and growing group of opponents who otherwise might never have spoken up, said Crowley, who helped stage the Saturday strategy session.

“I’m hopeful that they come to some different decision and that they don’t decide to move forward,” she said Wednesday morning. “But if nothing else, this bought time for greater public awareness and time for organizing.”