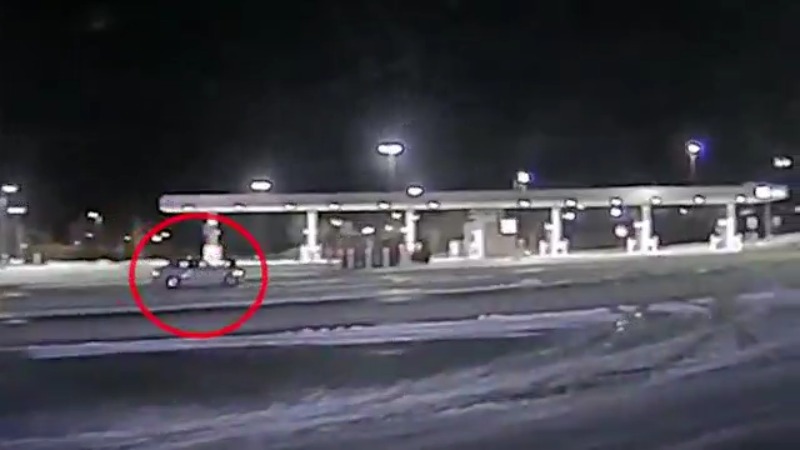 WILLOUGHBY, Ohio (WJW) — Local restaurants have been hit by a rash of thefts known as “dine and dashes,” and one of the crimes almost turned deadly after an employee was taken on a wild and dangerous ride when she tried to stop three delinquent diners.

The story began to unfold Sunday night when a manager at the Buffalo Wild Wings in Willoughby, Ohio attempted to stop three teenage girls who allegedly walked out on their $115 tab and jumped into their car. The manager tried to write down their license number, but one of the passengers removed the temporary tag from the back window. The manager then called the police as he and other employees tried to stop the car from leaving.

“They just took off forward and I was right there, so I was on top of that car. They tried to say I jumped onto the car, but in reality, I practically was put onto the vehicle,” Buffalo Wild Wings employee Kayla Sherman told Nexstar’s WJW.

The 24-year-old Sherman clung to the hood of the car near the windshield, as the 16-year-old driver drove around the parking lot in circles, trying to knock Sherman and a second employee clinging to a door handle off of the car.

According to Sherman, “I just had my fingers underneath the hood there and I clinched on as hard as I could.”

In the audio from the 911 call obtained by WJW, the restaurant manager told the dispatcher, “one of my employees just fell off of it, my other employee is still on top of it.”

When the dispatcher responds, “tell your employee to get off the vehicle,” the manager shouts, “’Get off the car Kayla!’ She can’t, they’re driving fast as [expletive].”

The teen behind the wheel then turned onto the road and accelerated.

“Swerving in and out of traffic, hitting the windshield wipers to try to get me to fall off, you know laughing and saying ‘we’ll take you on the highway,’” Sherman recounted.

She would later tell investigators that as the car was speeding down the road, the teenagers inside were throwing items out of the sunroof, including glasses of lemonade and bottles of water, in an effort to knock her off of the hood of the car.

When the driver decided to pull down a side street, Sherman realized it was her best chance to save herself, and she rolled off of the car into the snow.

‘My God forgive me for what I’m going to do’: Chesapeake Walmart gunman’s alleged manifesto released

“I was so thankful and not long after, an officer was right there and I said ‘please, just help me.’ He said ‘what do you need,’ I said ‘I just need to be warm,’ my fingers were black and blue from how cold it was that night,” she said.

A short time later, a Wickliffe police officer heard the bulletin about the car, and when he attempted to pull the vehicle over, the driver spun out in the snow.

The 16-year-old driver was arrested for fleeing and eluding, and she and her 17-year-old passengers will also face charges for the dine and dash.

“I really truly did not believe I was going to make it,” Sherman said. “I truly believed that I was going to die, they were going to either make me fall off somehow or if I fell off, they would run me over. For someone to intentionally hit me over a $115 check was baffling to me.”

Even though the ordeal left Sherman bruised and sore, she has already returned to work.