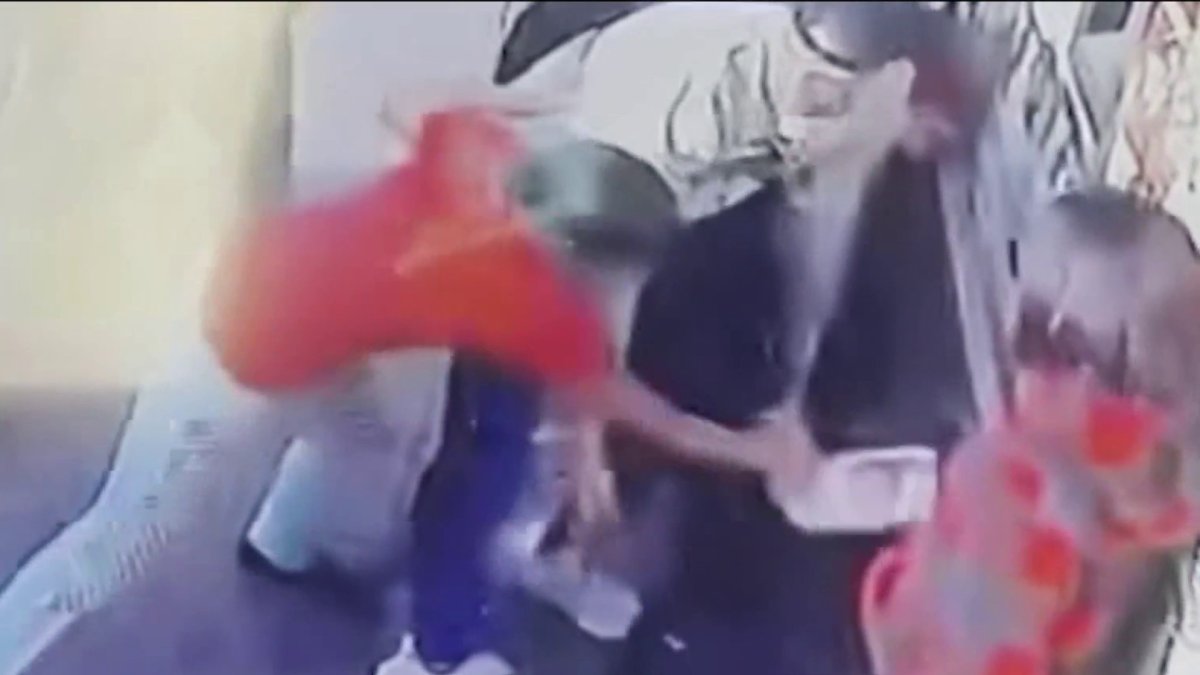 An attack on a 13-year-old girl in the Bronx was caught on surveillance camera, with a crew of people seen brutally beating the girl as they stole her shoes and cellphone.

The video, obtained exclusively by NBC New York, shows a group of people attacking the girl, leaving her battered, bruised and traumatized. Witnesses can be seen standing around and watching the attack, recording with their smartphones — one even applauded.

The victim said she was pepper sprayed, kicked in the stomach, punched in the head, even smashed with a half gallon bottle of milk, and said she saw one of the attackers had a taser close to her face. One man can be seen running down the block, just to hit the girl while she was on the ground.

The attack went down shortly before 3:30 p.m. Tuesday on Valentine Avenue in Fordham Heights. Police said the girl was initially approached from behind by three unidentified individuals.

“It was just not right. No one helped her. No adult helped her at all. They were all with their cell phones out,” the girl’s mother said. “I really wish that people would have it in their heart that if they see someone in trouble just help them … Why is it so hard to help someone when they need it?”

Footage of the violent attack is upsetting to watch, but the mother wants people to see what was done to her daughter.

“I had a bruise on my face here, I had something on my arm, I had bruises on my leg right here,” the girl told NBC New York, speaking through tears with her mom by her side. “My head was hurting here because she was trying to hit my head on the concrete. I was trying to block her…from hitting my head on the floor.”

The victim said she went to the grocery store near East 194th Street and Valentine Avenue, and doesn’t know why the group attacked, if it was a robbery or mistaken identity. They stole her $300 Nike sneakers, a Christmas gift, and hung them off a light pole near the attack.

The girl’s mother said the group may have confused her daughter for someone else, as the victim said the group kept calling her by a different name. Whatever the reason, she is now afraid to go outside.

As bad as the video looks, the victim said she’s lucky to be alive.

The girl’s mother told NBC New York that the family is looking to move out of the city because of this attack.

The NYPD is searching for three people, a female and two males, believed to have taken part in the attack. According to the NYPD, the female in the group allegedly began kicking and punching the teen in the face while the two males kicked her in the stomach before stealing her sneakers and cellphone.

The trio, described between 16 to 18 years old, fled on foot.

Macron warns bluntly that Biden’s agenda could “fragment the West”