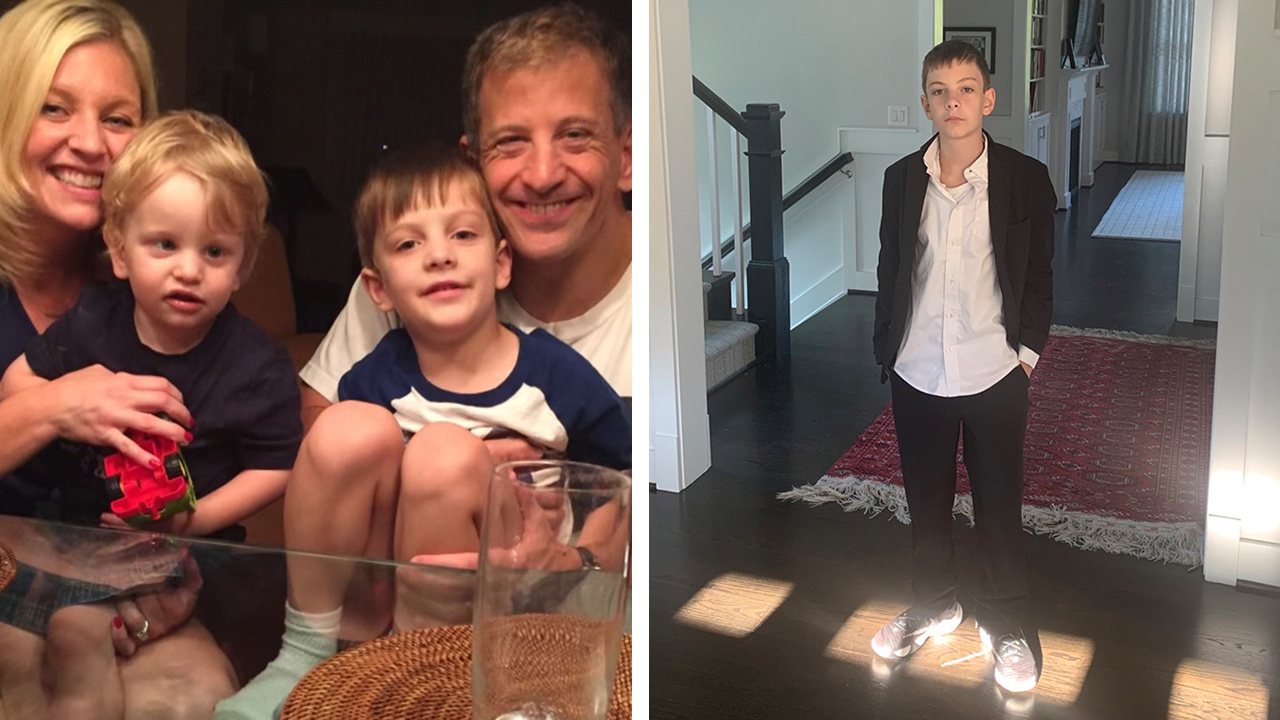 One kid does something amazing — and it can inspire another kid to do amazing things, too.

This is partly why young Jerron Hoffman, a 12-year-old living in Virginia, is dedicating a big chunk of his time this year to helping kids who are in the hospital with cancer.

He wants to brighten their days as they go through their treatment — and let them know that other people are thinking of them. And really care.

He’s involved because of young Jessie Rees, a 12-year-old girl in California who valiantly fought cancer from March 2011 to January 2012 — and who, during that period of struggle, thought about helping other kids with cancer.

Out of the kindness of her heart, she created a project with her family to reach out to others with fun gifts and sincere cheer.

Just as she shared kindness with others, Jerron Hoffman’s main project this year — aside from school, swimming and other activities — is sharing kindness with complete strangers.

Jerron Hoffman, at right, is dedicating himself to helping kids with cancer know that others care about them. At left, he’s shown in an earlier family photo with his dad, his mom and his younger brother, Nathan.
(Daniel Hoffman)

It’s about showing kids with cancer that someone out there cares about them — even as the scientific, medical and health care professionals do their part to work on the cure for cancer.

“I thought about it for a little bit,” Jerron Hoffman told Fox News Digital recently about his goal of helping kids with cancer, and whether he’d pick the “care” or the “cure” for his focus.

People who care can “donate joy jars to kids in need.” And the kids, right in the moment, can experience that gift of thoughtfulness.

The “cure” part of handling cancer is left to the professionals, the young man noted — and it “would take really long and it’s not necessarily helping any lives at this moment,” he said.

But in the “care” part of the equation, people can “donate joy jars to kids in need.” And the kids, right in this moment, can experience that gift, and its thoughtfulness.

This fall, Jerron Hoffman will be putting his feelings into action in a tangible way as he helps raise money for a very good cause.

A younger Jerron Hoffman, at left, with his mom and brother.
(Daniel Hoffman)

He’s participating in an event on October 8 at Tyson’s Sport and Health in McLean, Virginia.

Together with his dad, his younger brother, Nathan, and many other families and participants, Jerron Hoffman will be stuffing plastic “joy jars” with toys for kids — and decorating those containers and tailoring them to the children’s specific interests and likes.

“The kids with cancer can enjoy something.”

“Every kid likes different kinds of toys, and that means they’ll enjoy it more. Every kid is different,” said Jerron Hoffman.

“The kids with cancer can enjoy something,” he also said.

Members of the Rees family will also be present, including Erik Rees, Jessie’s dad — and they’ll be guiding the group as they prepare the joy jars for the kids in need.

SINGER KELLY LANG ON HER 17-YEAR BATTLE AGAINST BREAST CANCER: ‘I PROMISED GOD I’D BE A BRIGHT LIGHT TO OTHERS’

To date, Jerron Hoffman has raised $30,000 for this Jessie Rees Foundation effort.

It’s a beautiful gesture of giving to others in their time of need — and even more inspiring when one considers his own recent experiences.

Turning the pain of loss into thoughtfulness for others

Jerron Hoffman, at a young age, already knows the pain of losing someone he loved to cancer.

Dan and Kim Hoffman in a favorite family photo. As Hoffman wrote earlier about his wife’s passing from cancer, “She told our children she would be their guardian angel, watching over them.” Now her 12-year-old son — and her entire family — are assisting others in her honor.
(Courtesy Daniel Hoffman)

She fought cancer with everything she had — and left her husband, Dan, and her two sons to carry on as a family. Dan Hoffman wrote a moving essay last year about his wife’s battle — and the legacy she left her family.

“Diagnosed with neuroendocrine cancer in January 2017, Kim endured a complicated Whipple surgery to remove a cancerous tumor from her pancreas, 14 months of chemotherapy, a hernia operation, and two liver resections over the course of three years,” wrote Hoffman.

He is a former station chief with the Central Intelligence Agency and is a Fox News contributor.

She “devoted her remaining three months on this earth to our children as faithfully as she had since they were born.”

While she was in hospice, “Kim devoted her remaining three months on this earth to our children as faithfully as she had since they were born,” he wrote.

“She ordered their holiday and birthday presents and ensured there was more than enough candy for their baskets when they celebrated Easter with family friends after Kim passed away.”

Wrote Dan Hoffman earlier about his wife, “I’m eternally grateful to Kim for our two beautiful children, who so poignantly remind me of her.”
(Daniel Hoffman)

He said as well, “When we visited and during regular FaceTime chats, Kim told our sons how much she loved them as she discussed their hopes and dreams for the future.”

Also, “she told our children she would be their guardian angel, watching over them.”

Now, in her honor, her 12-year-old son and her entire family are helping others — and following in the path of Jessie Rees and her Joy Jars.

‘Personal for the kid who is getting it’

Jerron Hoffman said that in terms of what goes into the jars, “it depends on what the kids’ interests are … It’s customized for their own interests. It’s personal for the kid who is getting it.”

If the kids have a favorite color, a favorite toy, a favorite sport — all of those interests are taken into account, he said, when volunteers pack the mini toys into the jars for the children.

He also said, “The kids can still die because there’s not a cure yet for cancer — they’re still working on it — but here, with the ‘care,’ people can help so many kids.”

Once complete, the joy jars go to the hospitals for distribution to the kids who are fighting cancer.

Various companies have already donated goods and services to this meaningful charitable effort.

Jerron Hoffman (at right, above) is helping kids with cancer in honor of his mom, Kim, who passed away in 2021 after battling neuroendocrine cancer. “There’s a bunch of things you can do,” said Jerron Hoffman about helping other people who are struggling.
(Daniel Hoffman)

Said Jerron Hoffman, “Certain restaurants are going to donate food to us for our event on October 8. Starbucks is donating food and sandwiches, and McDonald’s is donating burgers.”

This didn’t just happen. Young Hoffman and many others made it happen.

The idea of filling “joy jars” with gifts for kids came from Jessie Rees of California.

They reached out to restaurants, companies and others in order to try to obtain donations for the good of others.

People “can volunteer, too,” said Jerron Hoffman. “There’s a bunch of different things you can do.”

‘Never, ever give up’

The idea of filling “joy jars” with gifts for kids came from Jessie Rees, who fought cancer from March 2011 until January 2012, when it claimed her life.

Even as she was going through her own health battles, it was her idea to bring a bit of joy and light to other kids who were fighting cancer in the hospital and couldn’t go home until their treatment was complete.

She started out by filling up brown paper bags that she decorated, then moved to Joy Jars. She also coined the term NEGU, which stands for her life’s motto and focus: “Never, ever give up.”

Her parents created the Jessie Rees Foundation in her honor.

“Jessie was a faith-filled, beautiful, athletic, caring and loving girl who courageously fought cancer (DIPG) from March 3, 2011, to January 5, 2012,” the foundation says on its website.

“She loved her family very much and her puppy Mr. Moe.”

“Jessie had one wish” — to help other kids.

The Jesse Rees Foundation explains on its website, “Joy Jars are for kids actively fighting cancer under the age of 19.”

“Each one of Jessie’s Joy Jars are age- and gender-specific and filled with new toys and activities to help a child fighting cancer smile and feel loved.”

As Jerron Hoffman himself wrote in a letter about the efforts, “No matter how bad things got, and how unlikely she was to survive, [Jessie] would support kids to never ever give up. NEGU really represents Jessie’s mindset.”

“After she died, Erik Rees, her dad, continued to make Joy Jars and support NEGU (‘never ever give up’),”  he continued, “and now they are a 501c3 nonprofit organization dedicated to encouraging kids fighting cancer.”

Anyone wanting to donate or help out ahead of the Oct. 8 event in McLean, Virginia — or at any other time of year, in any way — can visit the website at negu.org.

Maureen Mackey is managing editor of lifestyle for Fox News Digital. Story tips can be sent on Twitter at @maurmack.