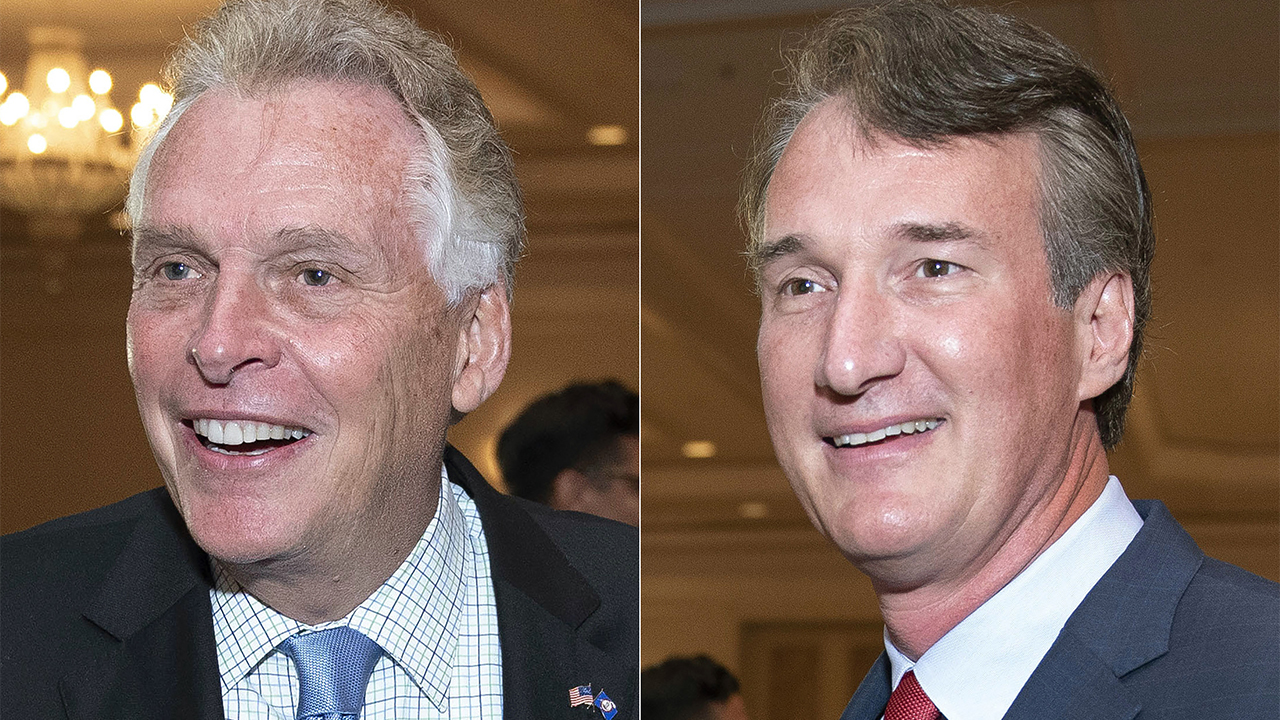 With just 13 days to go until Election Day in Virginia, the gubernatorial showdown between former Democratic Gov. Terry McAuliffe and Republican nominee Glenn Youngkin is deadlocked, according to a new poll.

McAuliffe and Youngkin are both at 46% among Virginia registered voters, according to a Monmouth University survey conducted Oct. 16-19 and released on Wednesday.

EDUCATION, TRUMP, IN SPOTLIGHT WITH TWO WEEKS TO GO UNTIL ELECTION DAY IN VIRGINIA

The new poll indicates that a surge in support among independents for Youngkin is a major factor in the GOP nominee drawing even with McAuliffe. Youngkin tops McAuliffe 48%-39% among independents, compared to a 46%-37% lead for the former governor in Monmouth’s September poll.

Also boosting Youngkin is a rise in support among female voters, the poll indicates. McAuliffe’s 52%-38% lead among women in September shrunk to 47%-43% in the latest survey.

The poll also suggests geography’s at play – Youngkin increased his already enormous lead in western Virginia – the reddest part of the state – while McAuliffe’s large lead in heavily-blue Northern Virginia has slipped slightly. The new survey indicates that McAuliffe retains single digit advantages in the Tidewater and Richmond/I-95 areas of the commonwealth.

“Suburban women, especially in Northern Virginia, have been crucial to the sizable victories Democrats have enjoyed in the commonwealth since 2017. However, their support is not registering at the same level this time around. This is due partly to a shift in key issues important to these voters and partly to dampened enthusiasm among the party faithful,” Monmouth University Polling Institute director Patrick Murray said.

The poll also suggests a shift in voters priorities, with 45% saying jobs and the economy are the top issue, up from 39% in September. Education and schools – at 41% – is now the second most pressing issue, up ten points from last month. Combating COVID dropped to third place, at 23%, down 11 points from September.

The new survey indicates that Youngkin – who’s made defending the right of parents when dealing with their children’s education the closing theme of his campaign – has drawn even with McAuliffe on being trusted to handle education and schools. And the poll points to Youngkin now holding a slight edge over McAuliffe on trust on jobs and the economy.

The poll was conducted in the wake of a major verbal gaffe by McAuliffe. During the second and final debate between the two candidates McAuliffe said “I don’t think parents should be telling schools what they should teach.”

The Youngkin campaign and other Republicans pounced, helping to make the clip go viral.

“McAuliffe’s sizable edge on handling Covid and his competitiveness on economic issues last month helped put him ahead in this race, but Youngkin has been able to change the terms of the debate, by using his opponent’s words on parental involvement in the school curriculum to shift voter attention on that issue. Not only has this eaten away at the Democrat’s previous advantage on education policy, but it has also raised doubts about McAuliffe’s ability to handle the pandemic,” Murray said.

Virginia and New Jersey are the only two states to hold gubernatorial contests in the year after a presidential election, ensuring they get outsized attention from coast to coast.

There’s a long-running trend of voters in the commonwealth defeating the gubernatorial nominee of the party that controls the White House. McAuliffe broke with that tradition in 2013 with his election as governor in the year after Obama was reelected. McAuliffe was unable to run for reelection in 2017 because Virginia governors are barred from serving two straight terms.

The close contest in Virginia – a one-time key battleground but still competitive state which is seen as a key bellwether ahead of the 2022 midterm elections – has national Democrats on edge as they defend their razor-thin majorities in the House of Representatives and Senate in next year’s contests.

The new poll, as with other recent surveys, points to an enthusiasm advantage among GOP voters. By a 79%-72% margin, Republicans indicated they were more motivated to vote than Democrats.

McAuliffe’s putting on a full court press to get Democrats to cast ballots in the current early voting period, or to go to the polls on Election Day.

One way is by bringing in top Democratic surrogates. First Lady Jill Biden campaigned with McAuliffe on Friday and voting rights advocate Stacey Abrams, the former Georgia House Democratic leader who in 2018 made history as the first Black female gubernatorial nominee of a major political party, teamed up with him for two stops on Sunday.

Vice President Kamala Harris stumps with McAuliffe on Thursday, and former President Barack Obama will campaign with McAuliffe on Saturday. McAuliffe’s also said twice over the past week that President Biden will join him as well. But the president’s standing in the commonwealth continue to slip, and stands at 43% approval and 52% disapproval in the new poll.

The Monmouth University poll questioned 1,005 registered voters in Virginia, ,with an overall sampling error of plus or minus 3.1 percentage points.