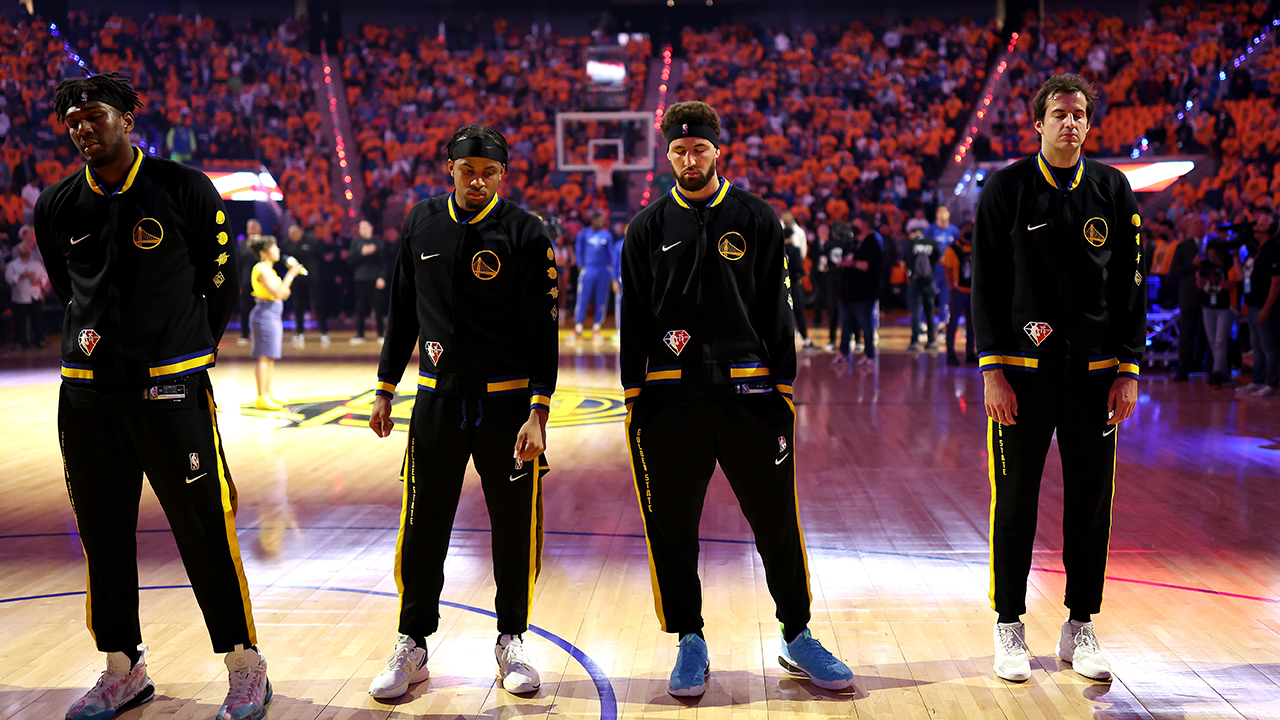 The Golden State Warriors were the latest sports team to encourage fans to support “sensible gun laws” Thursday night in the wake of the Texas school shooting.

Before the start of Game 5 of the Western Conference finals at Chase Center, the public address announcer asked fans to participate in a moment of silence for the victims of the Robb Elementary School shooting who were tragically killed this week when an 18-year-old gunman entered the campus and opened fire.

The Golden State Warriors stand for a moment of silence before a game against the Dallas Mavericks in Game 4 of the 2022 NBA Western Conference finals May 24, 2022, at the American Airlines Center in Dallas, Texas.
(Noah Graham/NBAE via Getty Images)

“Ladies and gentlemen, we ask those who are able to please stand and remove your hats as we remember the 21 victims — 19 children and two adults — who were tragically killed as they went about their day at Robb Elementry School in Uvalde, Texas, on Tuesday, the latest in a series of senseless gun violence across America,” the announcer said.

“Words cannot adequately describe the pain and anguish the families and friends of each of those innocent children and adults are experiencing at this moment and the huge hole it leaves in the hearts of our entire country. We grieve with everyone today during this time of healing.”

The announcement provided the crowd website addresses to “learn more about how you can support sensible gun laws in America” and encouraged fans to get out and vote. “Change starts at the ballot box.”

Kevon Looney, Moses Moody, Klay Thompson and Nemanja Bjelica of the Golden State Warriors stand for a moment of silence for the victims of the mass shooting at Robb Elementary School in Uvalde, Texas, prior to Game 5 of the 2022 Western Conference finals against the Dallas Mavericks at Chase Center May 26, 2022, San Francisco.
(Ezra Shaw/Getty Images)

The Miami Heat made a similar plea Wednesday before Game 5 of the Eastern Conference finals, asking fans to contact their state senators and “head to the ballot box” to advocate for gun law reform in the wake of the Texas school shooting.

Sen. Marco Rubio, R-Fla., took to social media after the game to call out the NBA for what he said was “politicizing a horrific tragedy in America” while remaining silent on China’s human rights violations.

The Miami Heat stand for a moment of silence before Game 5 of the 2022 NBA Eastern Conference finals May 25, 2022, at FTX Arena in Miami, Fla.
(David Dow/NBAE via Getty Images)

“The NBA doesn’t like to talk about the billions they make from a China that enslaves Uyghur Muslims and harvests their organs,” Rubio’s tweet said. “But they have no problem politicizing a horrific tragedy in America.”

At least 19 students and two teachers were shot and killed Tuesday morning when an 18-year-old gunman opened fire inside Robb Elementary School in Uvalde, Texas. Officials said the suspect was shot and killed inside a classroom.