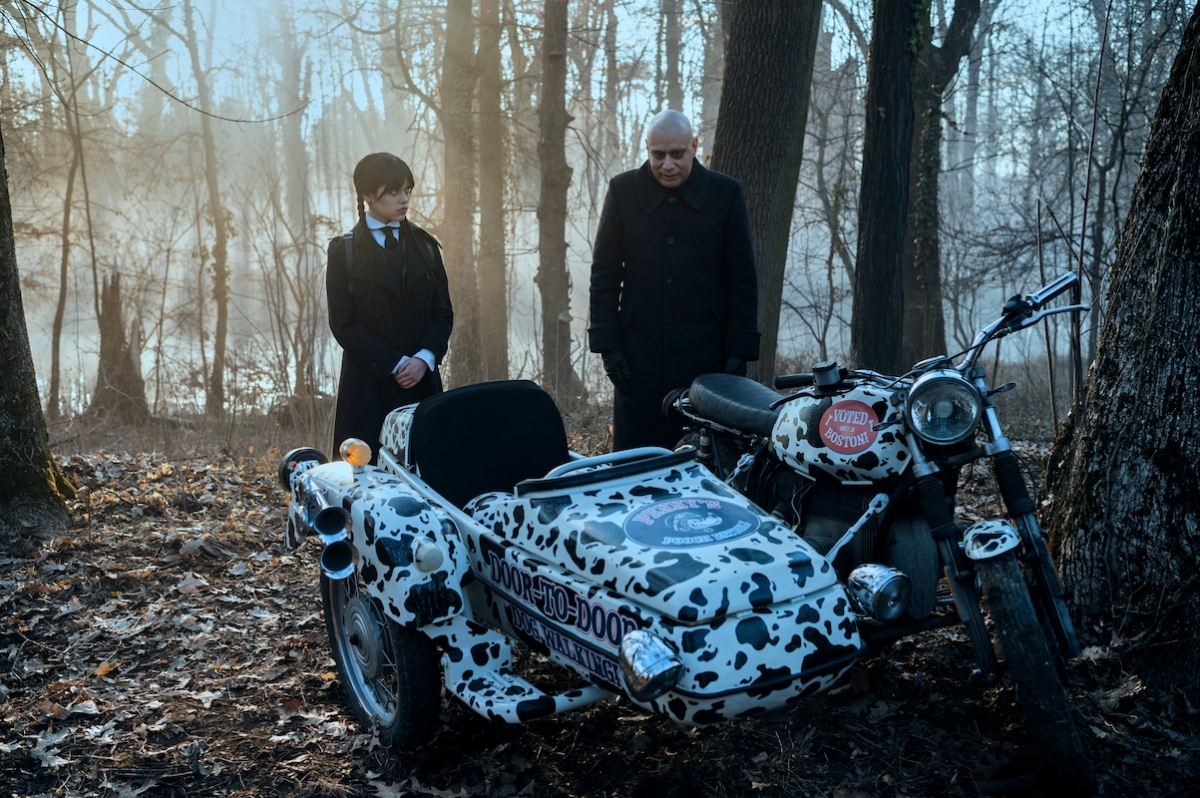 The Netflix series Wednesday reinvents The Addams Family. Wednesday Addams (Jenna Ortega) is now a teenager, attending Nevermore Academy. There’s still plenty of Addams Family in the show though. In fact, the creators pointed out some Addams Family Easter eggs you may have missed.

Al Gough and Miles Millar were guests on The Hollywood Reporter’s TV’s Top Five podcast on Oct. 28 to preview Wednesday. Millar pointed out three Addams Family Easter eggs specifically and there are many more to find.

Where to find Addams Family Easter eggs in ‘Wednesday’

Wednesday introduced the entire Addams Family in the series premiere. Parents Gomez (Luis Guzman) and Morticia (Catherine Zeta-Jones) drop Wednesday off at Nevermore. Her brother Pugsley (Isaac Ordonez) comes along and Lurch (George Burcea) is driving. Uncle Fester (Fred Armisen) will visit later and Thing accompanies Wednesday at school. Look no further than the town outside of Nevermore for some Charles Addams’ images.

“We have Easter eggs going back to Charles Addams all over the show,” Millar said on TV’s Top Five. “If you look at the storefronts on Jericho, which is the small town that is next to Nevermore, a lot of the storefronts are actually taken from the illustrations. So there’s one with the boot, the cleaners.”

Charles Addams drew The Addams Family before it became a TV show and movies. The show ran from 1964 – 1966 and live-action movies came out in 1991 and 1993. The animated films came out in 2019 and 2021. Principal Weems (Gwendoline Christie) is a reference to those original comics too.

“All of the names on the show as well, Weems is a Charles Addams character in one of his cartoons,” Millar said. “We really wanted to reference that and honor what he did.”

In fact, Miss Weems got her own comic strip. The first drawing was a 1956 New Yorker cartoon, which guest starred Gomez and Morticia leaving for the evening. Weems got promoted from babysitter in the cartoon to principal of Nevermore on Wednesday.

The Addams Family are Easter eggs for themselves

Even though they’re not the stars of Wednesday, Gough and Millar cast the extended Addams Family very carefully. The TV and movie casts did not entirely resemble Addams’ drawings, although the animated films got a little more distorted. Wednesday does its best to evoke the drawings with its live-action cast.

“The silhouettes of the family are much more classically Charles Addams, much more true to what he created,” Millar said. “That’s something we definitely wanted to do. That’s incredibly intentional.”