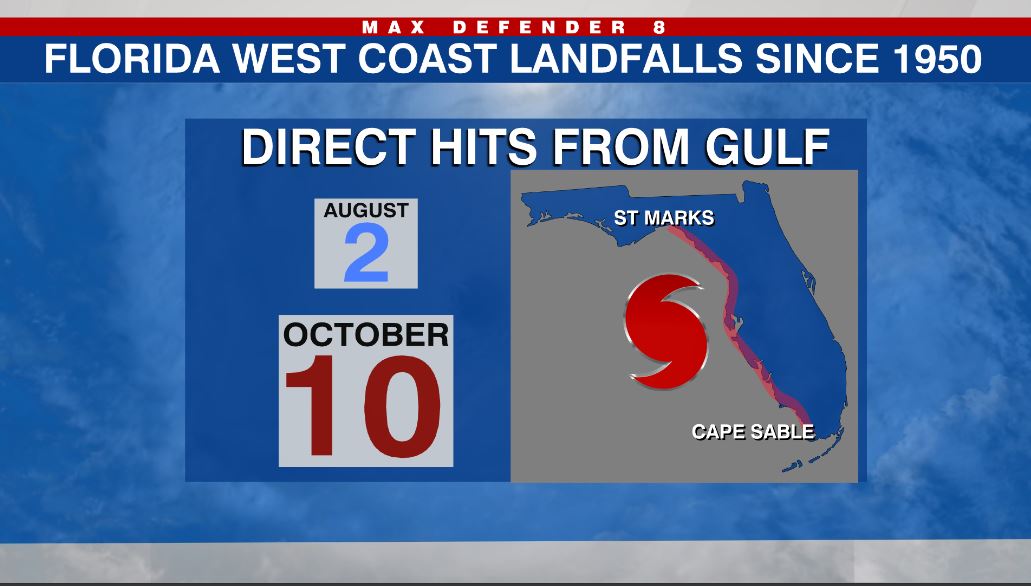 TAMPA, Fla. (WFLA) — Fall has arrived, and that not only means the promise of a gradual slide into cooler and drier air, but also the greater risk of a direct hit from a Gulf of Mexico hurricane on the West Coast of Florida. That’s because as the seasons change, so do the steering currents which guide storms.

Invest 98L: 2 things to watch with system that could impact Florida

Since 1950, Florida’s West Coast – from Apalachee Bay to Cape Sable – has only had two direct hits from Gulf hurricanes in August. Hurricane Charley is one of those rare exceptions, making landfall in mid-August near Ft. Myers.

That number ramps up in September and jumps to 10 direct landfalls during the month of October over the past 71 years.

There’s good reason for this increased threat during fall. It has to do with the steering winds in the tropics and in the mid-latitudes.

During summer, from Florida southward, the atmosphere is dominated by deep easterly winds (winds that blow from east to west). The Atlantic pattern is theoretically dominated by a big Bermuda high, on the periphery of which storms ride.

This steers storms westward from the Atlantic towards the U.S. and therefore poses more of a direct threat to Florida’s East Coast.

But as the seasons change, cooler air starts to drop south and that brings with it the mid-latitude westerly flow, also known as the jet stream. This westerly flow steers systems from west to east. So storms that emerge out of the Caribbean into the Gulf will often feel this westerly flow and be turned eastward.

The average place where tropical systems turn direction, we are calling “the turn zone”. That zone shifts from near Charleston, South Carolina in August to Central Florida during October. That’s a southward shift of 500 miles.

This weekend we have both the fortunate and unfortunate fate of being visited by a very early season cool front. Although weak, it will make a measurable difference in the Tampa Bay area. Temperatures will drop a few degrees and humidity will briefly drop to more pleasant levels.

But with that cooler air, comes the fall steering. Across the Gulf of Mexico this weekend there will be a westerly steering flow. As our Caribbean storm moves westward and then lifts north it will undoubtedly feel that steering flow and turn eastward to some degree.

At this point, it is too early to know how fast the storm will make the turn, which will have implications on timing, location and intensity.

For now, anyone in the path of the potential storm should make sure they have an up-to-date hurricane safety kit and a family plan in case you plan to leave. And keep checking back WFLA.com for updates as we get new information.