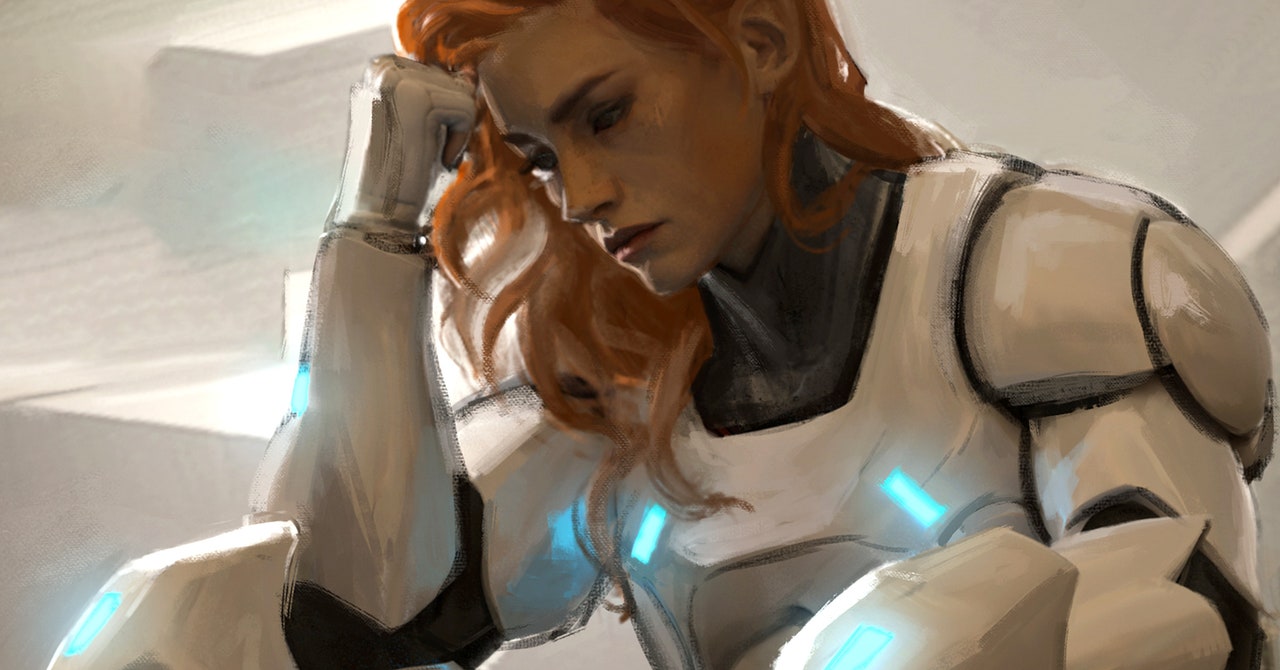 Destiny’s Sword is a sci-fi adventure where players command a squad of futuristic peace-keeping troops. But it’s not just about battlefield performance. It’s also about paying attention to the squad’s mental health. The player assumes the role of commander of a squad of soldiers, but if you don’t tend to your team’s psychological state and watch their non-verbal cues, the group’s performance is affected. You have to be observant: Is someone on your team suffering from PTSD? Anxiety? Are they drinking? Do they have bags under their eyes, indicating they are tired? Are they having nightmares and getting into fights? The developers wanted players to gain empathy for their squad members as they were shepherded through their recovery process, missions, and duty assignments.

“We don’t want players to experience what it’s like to be a soldier on the battlefield. Nobody wants to experience that because it’s hell,” Hall says. “Instead, we show you what the character is dealing with, in the aftermath, in trying to cope with their experiences.”

If video games are rife with violence, empathy may be the antidote, research shows. Adolescents are far less likely to imitate video game violence when the consequences of the behavior are shown, said Sarah Coyne, a video game researcher at Brigham University in Provo, Utah.

“Including the emotional trauma is a great way to make the games more realistic and to decrease harm to players,” she says.

But Hall didn’t just want to address the consequences of war. He wanted to deal with the nefarious side of game development: the mechanics inside of games that encourage compulsiveness in players—like if you log off or stay away from the game for too long your crops will die because you haven’t watered them or your enemy will overpower you.

“You can clearly tell those games because they’ll sell you a shield for money that will allow you to sleep well at night,” Hall explains.

His game, by contrast, stops benefiting users if they play too long.

While some big game developers and publishers have psychologists on staff who design games with the kind of loops that encourage compulsive behavior, 2DogsGames has a physiologist on staff to make sure their game doesn’t. The company also brought in Ramin Shokrizade, a game economy expert and an outspoken advocate for ethical game design and monetization. Shokrizade worked on World of Warships and World of Tanks: Blitz, for instance, and neither contained such mechanisms when he helped create them—though he says those kinds of gimmicks were inserted after he left Wargaming, the company that developed the games.

Destiny’s Sword wouldn’t be the first game to incorporate a character’s mental health. Many of the video games based on the works of horror writer H.P. Lovecraft, such as the Darkest Dungeon games, involve psychological themes. And in the game Hellblade: Senua’s Sacrifice, mental health is core to the narrative and the gameplay. But in Destiny’s Sword, the developers treated the human soldiers in the game like actual people, taking combat mental health experts’ advice on how to model the characters so that they seemed realistic, Shokrizade explains.