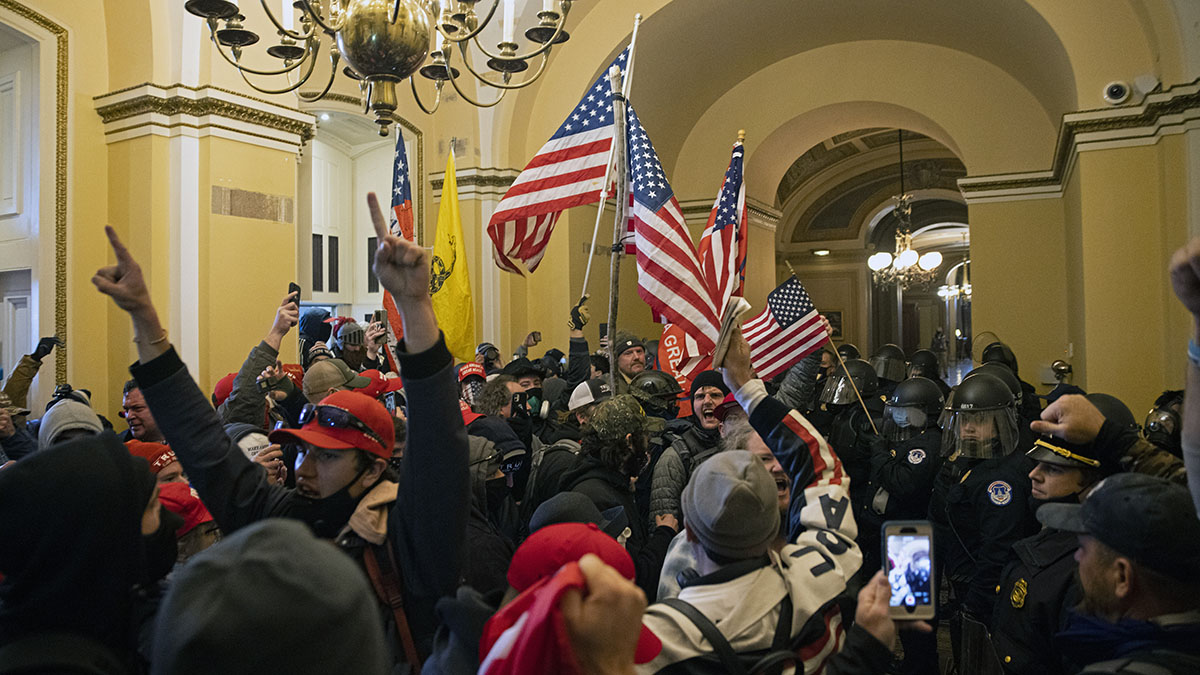 More than 800 people across the U.S. have been charged in the Jan. 6 riot at the U.S. Capitol, which left officers bloodied and sent lawmakers into hiding, and federal authorities continue to make new arrests practically every week.

The charges against members of the angry pro-Trump mob range from low-level misdemeanors for those who only entered the Capitol to felony seditious conspiracy charges against far-right extremists.

It’s the largest prosecution in the history of the Justice Department, whose leader, Attorney General Merrick Garland, has vowed to hold accountable “all January 6th perpetrators, at any level.”

As the U.S. House committee investigating the attack prepares to hold a series of public hearings to detail its findings, here’s a look at where the criminal cases stand:

WHO HAS BEEN CHARGED IN THE CAPITOL RIOT?

Authorities have arrested people in practically all 50 states in connection with the riot. They include former police officers and U.S. military veterans, a five-time Olympic swimming medalist and the son of a New York City judge.

Hundreds of people who went inside but didn’t take part in any destruction or violence are facing only misdemeanor crimes like picketing in the Capitol and disorderly conduct that call for up to six months behind bars.

More than 250 people have been charged with assaulting or impeding law enforcement who were trying to protect the Capitol, including more than 85 accused of using a deadly or dangerous weapon or causing serious bodily injury to an officer. Others have been accused of assaulting members of the media — one an Associated Press photographer — or destroying media equipment.

Eleven members of the far right militia group the Oath Keepers, including its founder Stewart Rhodes, have been charged with seditious conspiracy in the Jan. 6, 2021, attack on the U.S. Capitol. Legal analyst Danny Cevallos breaks down the strengths and weaknesses of the case against them — and explains why the charges may spell trouble for President Trump.

The most serious cases have been brought against members of two far-right extremist groups, the Oath Keepers and Proud Boys.

The leaders of both groups have been arrested and remain locked up while they await trial later this year for seditious conspiracy, which alleges a plot to forcibly oppose the lawful transfer of presidential power. The rarely used Civil War-era charge calls for up to 20 years in prison.

WHO HAS BEEN CONVICTED IN THE CAPITOL ATTACK?

More than 300 people have pleaded guilty to a slew of crimes, including conspiracy and assault. Among them are three Oath Keepers who have admitted to seditious conspiracy, are cooperating with investigators and could testify against their fellow extremists at trial.

There have been seven trials so far in the District of Columbia’s federal court. The first five juries convicted the riot defendants of all charges.

The convicted include Thomas Webster, a 20-year New York Police Department veteran who attacked an officer during the riot. Webster claimed he was defending himself when he tackled the officer and grabbed his gas mask.

Jurors also rejected the defense of an Ohio man who claimed he was only “following presidential orders” from former President Donald Trump when he stormed the Capitol. Dustin Byron Thompson was convicted of obstructing Congress from certifying the electoral vote and other charges.

A judge decided two other cases without a jury, acquitting one of the defendants and partially acquitting the other.

President Joe Biden spoke to the country about the events of January 6, 2021, stressing that Americans need to learn the truth about what happened and ignore lies and misinformation.

In the other misdemeanor case, McFadden found Matthew Martin of New Mexico not guilty of charges that he illegally entered the Capitol and engaged in disorderly conduct, saying it was reasonable for Martin to believe that outnumbered police officers allowed him and others to enter through the Rotunda doors.

WHAT ABOUT THE PUNISHMENTS?

Nearly 200 people have been sentenced so far. The punishments have ranged from probation to more than five years behind bars. About 100 people who were charged with lower-level crimes have avoided going to prison, although some of those received time in home detention.

Others who received lengthy sentences include Jacob Chansley, the spear-carrying rioter whose horned fur hat, bare chest and face paint made him one of the more recognizable figures in the attack. Chansley, who called himself “QAnon Shaman,” got about 31/2 years behind bars after admitting to entering the Senate chamber and writing a note to Vice President Mike Pence that said: “It’s only a matter of time, justice is coming.”

The two most high-profile trials — involving the Oath Keepers and Proud Boys — are expected to take place this summer and fall.

Henry “Enrique” Tarrio, who was once the Proud Boys’ top boss, and four others linked to the group were charged on Monday with seditious conspiracy after previously facing other conspiracy counts. They are scheduled to stand trial beginning Aug. 9.

Tarrio, who has since stepped down from his post as the group’s chairman, was arrested in a separate case two days before the riot and was not at the Capitol on Jan. 6. But he is accused of helping put into motion the violent attack.

One year has passed since supporters of former President Donald Trump stormed the U.S. Capitol during the certification of Electoral College votes. NBCLX Political Editor Noah Pransky brings you a timeline of the day and the aftermath.

The trial for the Oath Keepers leader, Stewart Rhodes, and four other members and associates the group is scheduled to start Sept. 26. Prosecutors say the Oath Keepers plotted for weeks to try to overturn the election results and prepared for a siege by purchasing weapons and setting up battle plans.

Authorities are still searching for many suspects, including the person who planted two pipe bombs outside the offices of the Republican and Democratic national committees the night before the melee.

The FBI released new footage of the suspect who placed two pipe bombs near the RNC and DNC headquarters ahead of the Capitol Riot.

CA police fatally shoots man who lit a tree on fire, charged at officers with piece of wood

Why Is It So Hard to Find a Primary Care Doctor Right Now?