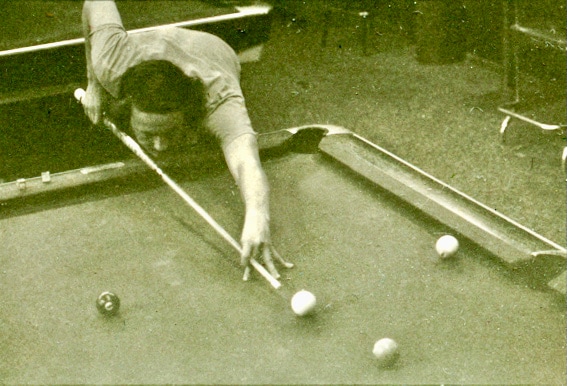 Back when I was 13 or so and living in England, there was a kid at school named Jonathan Hutt. Everybody called him “Shed.” I wasn’t sure why, so I finally asked someone.

I was told that “Hutt” sounds like “hut” and a shed is a sort of hut. Get it?

Some nicknames need an explanation. Maybe the best ones do. It’s not much of a stretch to call a tall person “Stretch.” But to call him “Cirrus,” after the highest clouds in the atmosphere, shows a bit of creativity.

I admit that “Cirrus” is an awful nickname. Nicknames need to be punchy. “Punch” is a good nickname.

Kensington’s Andy Moursund has spent a lot of time thinking about nicknames. He shoots pool, and pool halls are veritable petri dishes of nicknames.

Or at least they used to be. Every week, Andy drives to Elkridge, Md., to play in a tournament at a billiard hall called the Triple Nines.

“I’m the only player out there who doesn’t go by his (or her) real name,” he wrote. “Since most of the other players there are about half my age (I’m 78), I guess you might say my name has been grandfathered in.”

And what is the name Andy goes by in those weekly tournaments? Taxi.

“My own moniker was given to me when I walked into Roman Billiards in Silver Spring one day in 1967 wearing a Montgomery County taxi cab badge,” Andy wrote. “The name stuck, and to this day 99 percent of the players I encounter in the few remaining rooms I frequent only know me by a name I was given 55 years ago.”

It doesn’t matter that Andy actually drove a cab for a scant three months while he was waiting for his draft notice. The name lives on.

Andy is a bit of a collector. He used to own a used bookstore in Bethesda. A die-hard pool room habitue, he says he more or less lived with a cue in his hands for long stretches from the late 1960s to the early ’80s. He played in Durham, N.C., when he was at Duke and was a regular at the aforementioned Roman Billiards, as well as Brunswick Billiards at 14th and Irving streets NW, Guys and Dolls in Silver Hill and Jimmy’s Golden Q at Seventh and T NW, right across from the Howard Theatre.

And during that time, he collected nicknames. There was Booty Green, who always came in wearing his Army uniform, and Maalox, an older gent who swigged from a bottle of Maalox to calm his stomach. Khrushchev was a dead ringer for the Soviet leader.

Probably the most accomplished player was Melvin “Strawberry” Brooks, a famed hustler of one-pocket pool from the District. According to Brooks’s 2006 obituary, Strawberry got his nickname as a child when he and his friends would shoplift their lunch from grocery stores.

Some nicknames have less colorful explanations. Rocky Semmes of Alexandria had an uncle named Harry. Harry was named after his father and thus was “Junior.” But as a youngster, he had trouble pronouncing that word.

“The best he could ever muster was ‘dune,’” Rocky wrote. “So from his earliest days my Dad’s oldest brother was known throughout his long life as Dune to all family, friends and familiars.”

The nickname of Dune’s younger brother, David, came from a windup grandfather clock in the house.

Wrote Rocky: “Young David could never quite imitate the ‘tick-tock’ noise it made, and the closest he came to it was ‘tick-tick-tick-tick.’”

He was forever known to the world as “Tick.”

This is obviously a family that loves nicknames. (And has trouble with pronunciation?) When Harry — Dune, you will recall — had a son, the boy was also named Harry.

“Harry III was fond of turtles but he could never quite get his mouth around the word ‘turtle’ and it always came out as ‘turko,’” Rocky wrote. “So, you guessed it, he has been known by all in this world as Turko to this very day.”

And what about Rocky? He’s named after his father, Raphael Semmes. Raphael Sr. was a boxer in his youth, nicknamed “Rocky” after Rocky Marciano. The nickname passed from father to son.

Do you have an unusual nickname? Or a nickname with an unusual or convoluted backstory? Send the details — with “Nickname” in the subject line — to me at [email protected]

Helping Hand is the name of The Washington Post’s annual reader fundraising campaign. It’s a name that describes what we’re hoping to do: lend a helping hand to three local charities by encouraging readers to donate.

Every day, Bread for the City, Friendship Place and Miriam’s Kitchen work to end hunger and homelessness in our area. To give, visit posthelpinghand.com.