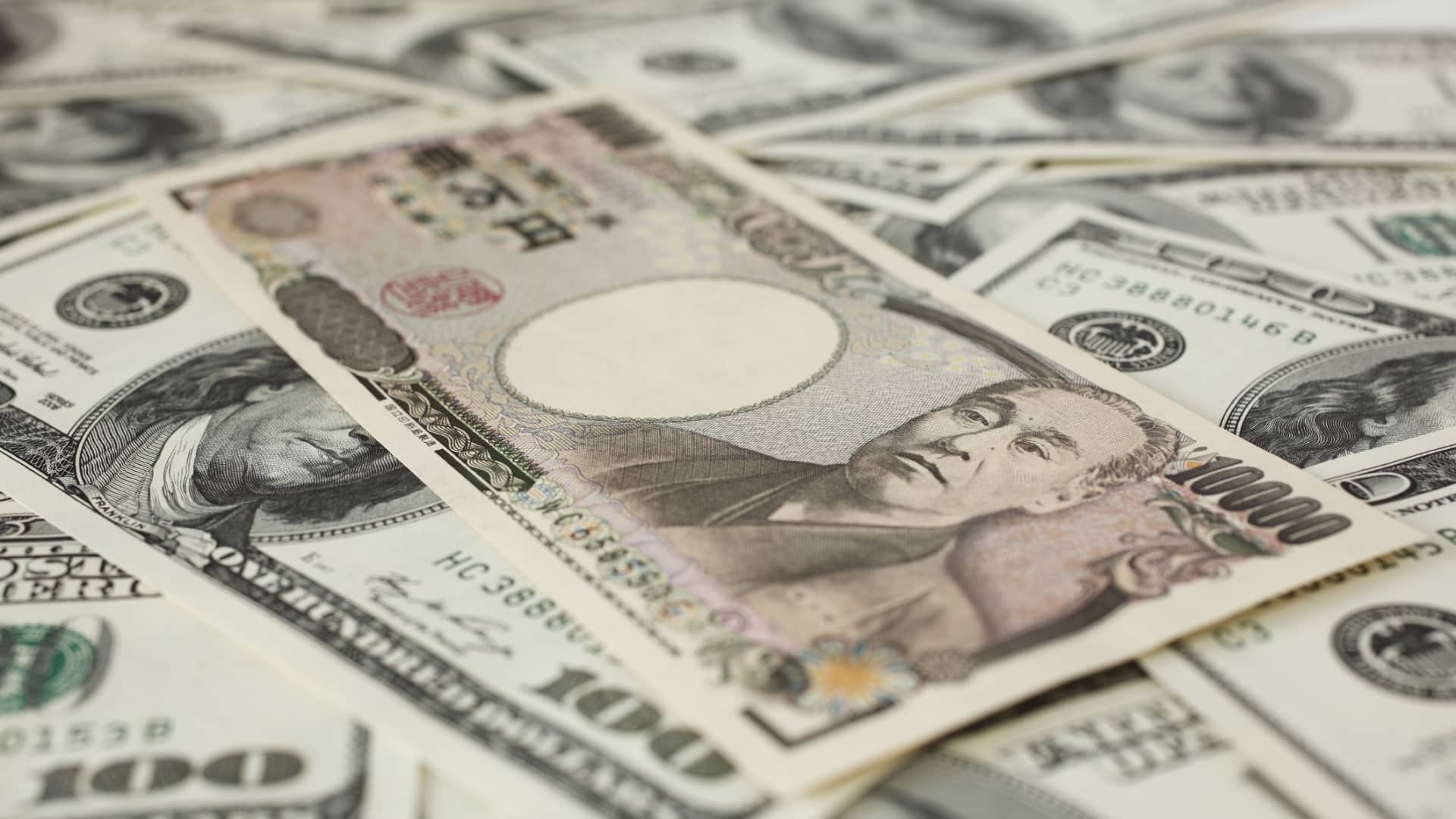 After a precipitous decline against the dollar this year, the yen enjoyed a brief respite on Wednesday on reports the Bank of Japan (BOJ) may be preparing an intervention to prop up the currency. Government officials have in recent days stepped up their rhetoric, with Finance Minister Shunichi Suzuki noting in an interview that yen-buying currency intervention was among the government’s options should it weaken further. Media reports had claimed, citing sources, that the central bank had conducted a rate check in the currency market. That step is often seen as a precursor to possible intervention, where central bank officials survey market participants to determine an indicative price for buying or selling yen. News of the rate check led to a brief rally in the yen, which rose more than 1% against the dollar to push the currency pair back down to below 143. It was trading around 143.41 yen against the dollar Thursday afternoon during Asia hours. The yen has lost around 20% of its value against the greenback since the start of the year. It plunged to within touching distance of 145 yen per dollar last week as investors bet that the BOJ will maintain its ultra-loose monetary policy, in defiance of other central bank action around the world. Will intervention work? Analysts that CNBC Pro spoke to believe intervention is a possibility, albeit a distant one. Yujiro Goto, head of FX strategy at Nomura, told CNBC Pro that intervention “still looks unlikely” below the 145 level — a crucial level that brings the currency pair within striking distance of 146.78, which was the level reached before a joint Japan-U.S. intervention to support the yen in 1998. The chance of an intervention is increasing, according to Alvin Tan, head of Asia FX strategy at RBC Capital Markets, but he does not think it’s “imminent at this point.” While Max Lin, Asia FX and rates strategist at Credit Suisse , told CNBC’s “Street Signs Asia” on Thursday that “it’s not going to happen anytime soon.” “I don’t think that the BOJ and MOF [Ministry of Finance] have a problem with the dollar-yen at 145. They just thought it’s getting there too quickly. So, the rate check was just to put the market on notice that they are watching,” he added. Lin pointed to the relatively low level of inflation in Japan as another reason for not intervening. However, Chang Wei Liang, FX and credit strategist at Singapore’s DBS Bank , believes an intervention “cannot be ruled out,” with the yen now “substantially misaligned from its fundamentals” and the currency being “excessively volatile.” There is no guarantee that an intervention, should it occur, will bring about the desired result, however. “[Intervention] is not going to break the uptrend in dollar-yen when the fundamental drivers are still there, namely the strong US dollar, the monetary policy divergence between the [U.S. Federal Reserve] and the BOJ, and finally the negative trade account,” RBC’s Tan said. Not just about dollar strength The strength of the dollar this year has played a role in the yen’s decline, but there are other factors at play, according to Tan. “If you look at the U.S. Dollar Index, that has gone up about 14%. But when you look at the dollar-yen pair itself, you’ll see that it has gone up a lot more — by 25%. It’s almost double the gain compared to the U.S. Dollar Index,” he told CNBC Pro. Tan thinks the main reason for the yen weakness is the widening monetary policy divergence between the U.S. Fed and the Bank of Japan. And that divergence could be set to widen further, with market watchers now bracing themselves for a 75 basis point hike at the U.S. Federal Reserve meeting next week following a hotter-than-expected August inflation report . Nomura , meanwhile, has predicted full percentage point hike. Tan also cited Japan’s negative trade balance as another drag on the yen. Where the yen is headed DBS Bank’s Chan believes the yen will trade within the 140-145 range, with policy rhetoric making it “difficult” for the currency pair to go over 145. While Nomura’s Goto believes the yen will trade at around 142.5 to the dollar by month’s end, before strengthening to 135 by the end of the year. He added that the dollar-yen will trade within a “wider than usual” range of 130-147.5 for the rest of 2022. Meanwhile, RBC’s Tan believes the dollar-yen is near its peak. “We are expecting dollar-yen to rise into the 150 range by early next year, so we are looking for a little bit more upside [for the dollar]. However, that said, I can agree with the sentiment that most of the move in the dollar-yen cycle is already done. It’s not going to keep on rising the whole time,” he said. Tan believes that a sustained turnaround in the yen’s fortunes will come down to a weakening of the dollar. The BOJ will also have to hike rates to bridge the divergence with the Fed — an unlikely scenario, according to Tan.