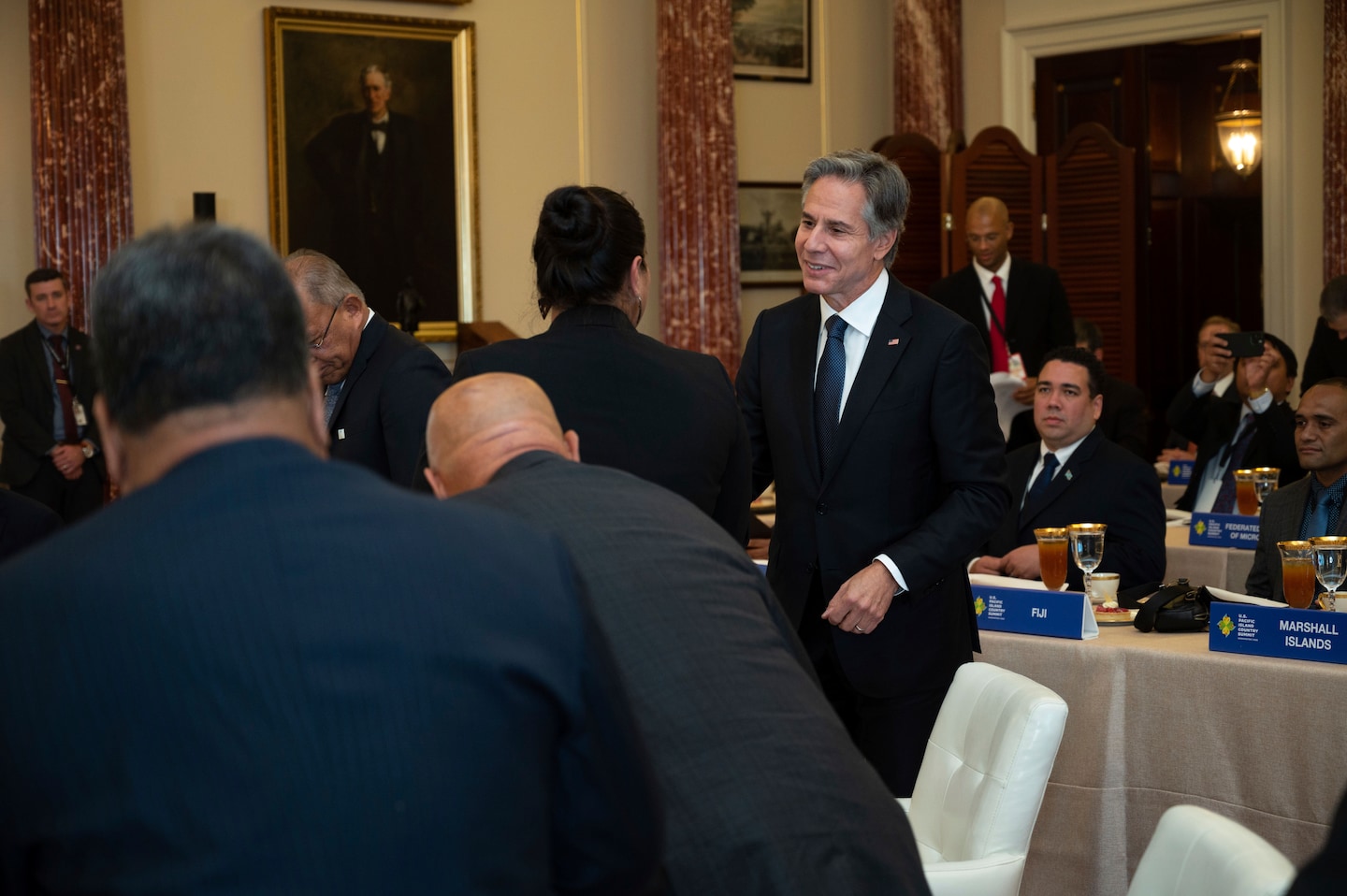 President Biden this week is welcoming to the White House for the first time more than a dozen Pacific island leaders whose countries are receiving fresh attention and resources as China asserts its own influence in the region.

The high-level wooing — including meetings with House Speaker Nancy Pelosi (D-Calif.), Secretary of State Antony Blinken and Commerce Secretary Gina Raimondo — coincides with the unveiling of a first-ever Pacific island strategy that is aimed at addressing the nations’ top concerns. Those include climate change, recovery from the coronavirus pandemic, illegal fishing and technology investments.

The engagement is intended to “step up our game” across the Indo-Pacific region, according to a senior administration official who spoke to reporters on the condition of anonymity under ground rules set by the White House.

As part of this push, the administration will announce it is investing more than $860 million in expanded programs to aid the Pacific islands, according to officials, who spoke on the condition of anonymity because they were not authorized to speak for the record.

That money comes on top of more than $1.5 billion in support that has been provided to the nations over the past decade, they said.

The effort appears already to have paid some dividends. On Wednesday, all of the visiting leaders endorsed an 11-point statement of vision committing to joint endeavors, officials said. They notably included Solomon Islands Prime Minister Manasseh Sogavare, whose government had earlier indicated it needed “time to reflect” on the declaration.

Biden will host a dinner for the leaders at the White House on Thursday. While other Asia-Pacific heads of state have been to the White House, many Pacific island leaders have never had that opportunity before.

Among other steps, Washington will expand diplomatic missions from six to nine among Pacific island nations; create a new ambassador’s post to the Pacific Islands Forum, an international organization of nations akin to the Association of Southeast Asian Nations; and reestablish a U.S. Agency for International Development mission in Fiji.

The summit is an acknowledgment, administration officials said, that the Pacific islands have gotten “short shrift” as the United States has focused its attention elsewhere. “There’s also a deeper recognition that in the past we have perhaps paid lesser attention to these critical places than we should have,” White House Indo-Pacific Coordinator Kurt Campbell said at a discussion last week hosted by the Carnegie Endowment for International Peace. “I think being honest about that is important.”

The administration took advantage of the fact that the leaders were in New York for the United Nations General Assembly, to gather them in Washington. The summit is “symbolically important,” said Gregory Poling, co-director of the Pacific Partners Initiative at the Center for Strategic and International Studies. “It shows that they’re taking it seriously.”

The inclusiveness of the summit is significant, Poling said. The administration included not only the islands that Washington has formal diplomatic relations with but also two French territories and two self-governing countries that are in free association with New Zealand — the Cook Islands and Niue. “The White House went through diplomatic gymnastics to show that they’re respecting the formalities of Pacific regionalism,” he said.

“This is being framed as an initiative where the White House is doing things on the Pacific’s terms — not trying to dictate to smaller states,” Poling said.

“The demand signal from the region … it’s louder and clearer than it ever has been,” the official said.

The U.S.-China strategic competition is the context for the initiative, Poling said. “The United States would not be paying this much attention to the Pacific islands if there were not the fear that it’s losing influence to China.”

But that recognition is okay, he said. “The key is that the United States competes best with China by providing public goods to our partners better than China can.”

The money being invested in the Pacific islands may not seem like a lot when compared to what’s being spent to aid Ukraine push back the invading Russians, Poling said. But “it’s about sustainable development assistance to a peaceful region.”

Michael E. Miller in Sydney contributed to this report.

Photos: Apollo 17—The Last Time Humans Walked on the Moon