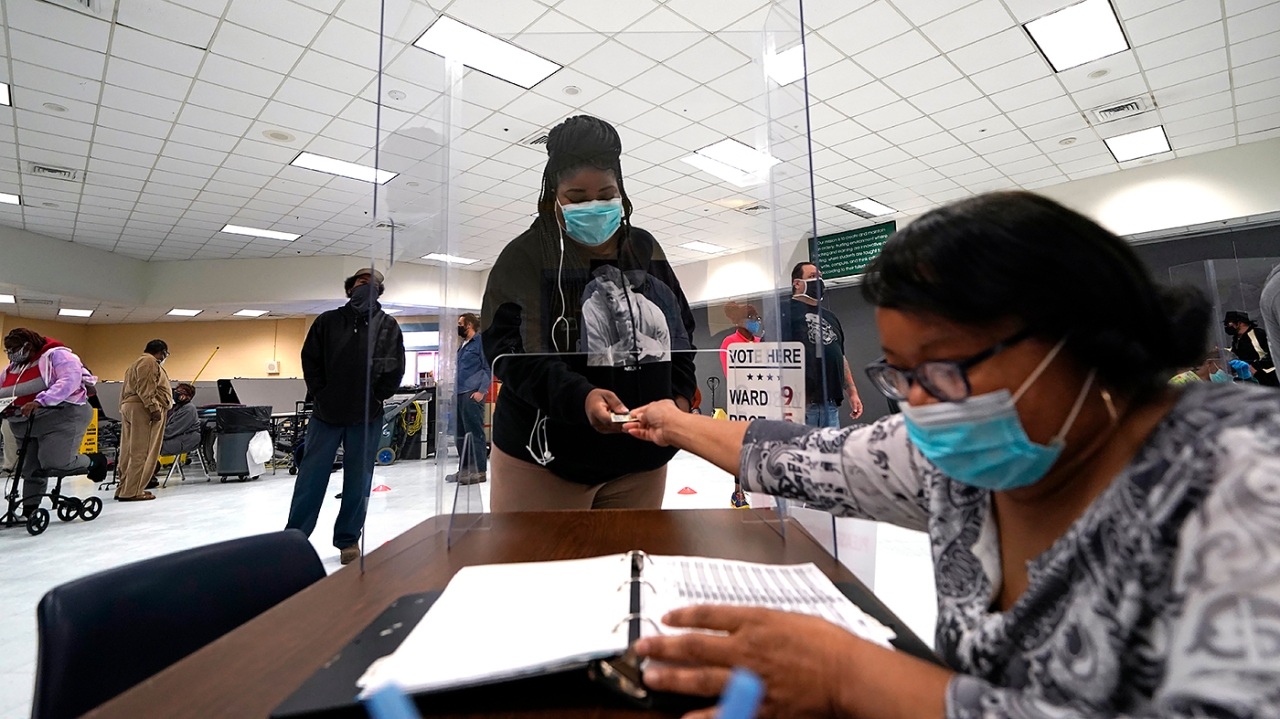 Advocates are calling on Democrats to step up their messaging on voting rights and abortion to Black women specifically, arguing it is critical that the party turn out the key constituency to hold on to majorities in the Senate and House.

But part of the problem, advocates say, is that Democrats are taking Black women’s votes for granted.

“Democrats are constantly trying to get suburban white women voters, to the extent sometimes that Black women say ‘we’re your core voters, the least you can do is spend some money in our neighborhood,’” said Marcela Howell, CEO and founder of the nonpartisan organization In Our Own Voice: National Black Women’s Reproductive Justice Agenda.

“The reality is, they go after what they consider swing voters, and we’re not,” she added.

But it could make them more likely to stay home on Election Day, she added, potentially costing Democrats votes in an already difficult political climate. And states with some of the most crucial midterm contests, like Georgia, have also become a ground zero of sorts for both issues and have significant populations of Black women.

“I think that both parties take Black women for granted,” Butler said, but added that it’s more of an issue for Democrats.

“Who is identified as quote, unquote, swing, in my opinion, is who do you find worthy to target, to talk to, to hear from and then to act on behalf of,” said Butler.

LaTosha Brown, co-founder of the Black Voters Matter Fund, pointed out that some of the most vocal supporters of Black women have been Democratic candidates like gubernatorial nominee Stacey Abrams in Georgia, Rep. Val Demings, who is running for Senate in Florida, and North Caroline Senate candidate Cheri Beasley.

“Now you see Black women running for some of the highest offices in the land,” said Brown. “They can see Black women organizers on the ground that are encouraging and pushing and grasping and lifting up Black women.”

She added that the influx of Black female candidates this election cycle is a result of Black women long feeling unheard or overlooked despite the consistent voter turnout they provide Democrats.

There are some current lawmakers speaking to Black women, as well. Rep. Lucy McBath (D-Ga.) spoke directly to the concerns about reproductive freedom at the Congressional Black Caucus Foundation conference.

”Women of color in the United States have the worst rate of maternal death in the developed world,” said McBath “Now, with increasing threats to women’s health care all across the United States, I’m afraid that if we don’t stand up things are only going to get worse. Make no mistake about it — and I do not say this lightly — this is a crisis for our community. But it is a preventable one. We can pass legislation right now that will ensure that every woman in America has the right to make her own health care decisions with her family and her loved ones and her medical professionals.”

Still, Howell said the party is sending mixed messages to Black women. Instead of “walking in lockstep” the way Republicans do on issues, Democrats “range all over the place” in their priorities, she said.

“In many ways, it makes it a little bit harder to get voters’ attention because they hear different messages,” Howell added.

A 2019 report from the Center for American Progress found that Black women are drawn to policies on job security, racial justice and health care. Two-thirds of Black women voters believe abortion should be legal in all or most cases.

While abortion rights have become a major issue on the campaign trail this cycle, Howell said Black women are particularly invested in reproductive justice, which combines racial justice and abortion rights.

But while many Black women care deeply about the issue, advocates say some of those most affected may also have the most difficult time casting a ballot.

The Brennan Center reported that lawmakers in 39 states considered at least 393 restrictive bills for the 2022 legislative session. These laws place restrictions on things like mail-in ballots and early voting, disproportionately affecting Black voters.

The new voting laws left many Black voters feeling their votes either didn’t matter or were even thrown out during the 2016 election, said Howell. It wasn’t until the results of the 2020 presidential election when In Our Own Voice noticed those sentiments changed.

“After the 2020 election … fewer people felt like their vote might not count,” said Howell. “They also said things like, ‘I believe that Black voters can make a difference in an election and change the outcome of the election.’”

Brown said it is “absolutely” intentional that the same states with the most restrictive reproductive laws are also some of the same ones enacting restrictive voting laws.

“We understand that voting gives access to impact policy, and that’s power,” said Brown. “We are seeing sexism, racism and control. The core thread between all those things is a question about freedom.”

That presents a challenge, but also an opportunity for Democrats.

Brown said in order for Democrats to show they are invested in Black women, they have to indicate they are willing to “fully commit” to legislation that will protect them.

“I want to hear an unquestionable commitment to restoring the Voting Rights Act and passing voting rights laws,” she said. “I want to hear that they’re committed to the elimination of the filibuster, that it’s a key legislative priority and they are willing to do whatever they need to do to so we can actually get voting rights legislation passed this session.”

Howell added that as candidates look toward the 2024 presidential election, they must also take time to appear in predominantly Black communities — especially in the South.

But they also have to show they understand the difference between rights and access, she said. That is, Democrats need to show they’ll not only fight to ensure Black women have the right to vote or get reproductive care, but will have access to both.

“Because you have the right on paper, doesn’t mean you have access to the services,” said Howell. “So when you hear [politicians] talking about abortion access, that means they got the message. That’s when you know, they’re actually talking to women of color, and specifically Black women voters.”