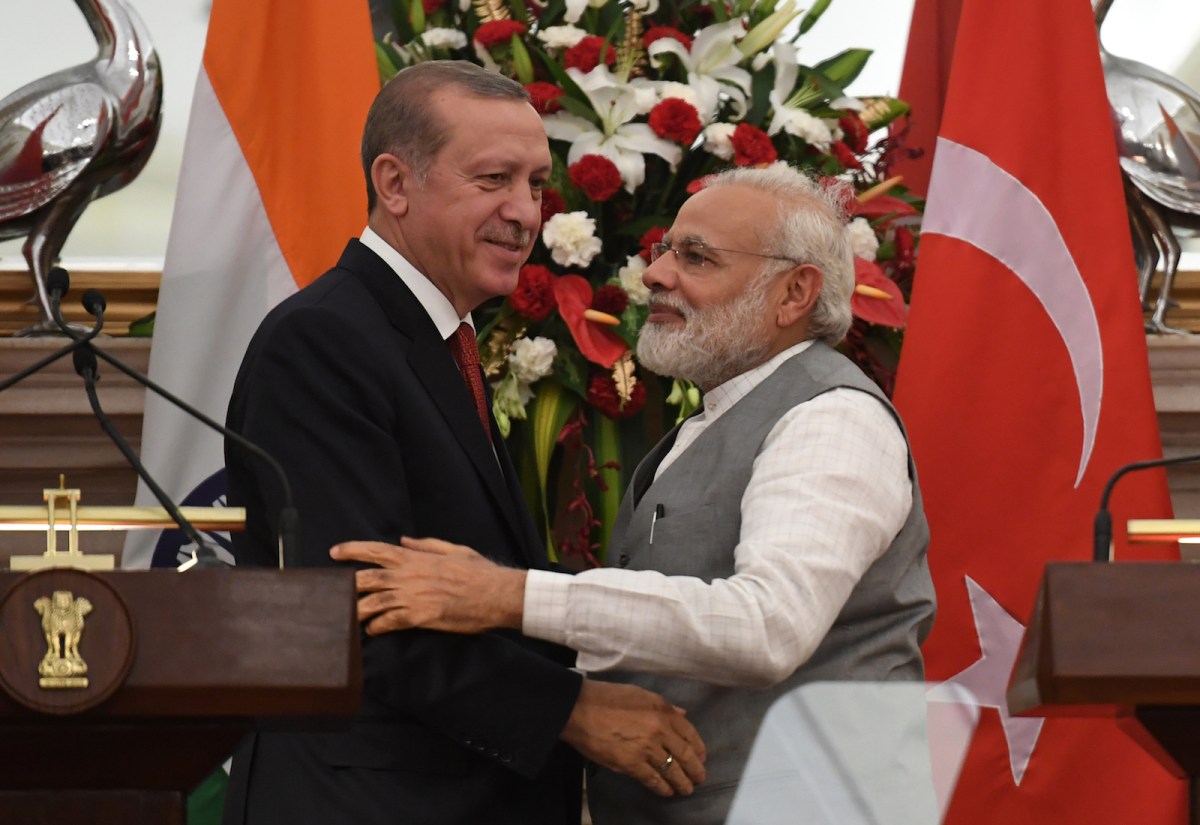 A mild flutter ensued after Indian External Affairs Minister Subrahmanyam Jaishankar’s recent meeting with his Turkish counterpart Mevlut Cavusoglu on the sidelines of the UN General Assembly (UNGA) session in New York on September 21 when it came to be known that Cyprus figured in their discussion. Jaishankar highlighted it in a tweet.

The Indian media instinctively related this to Turkish President Recep Tayyip Erdogan making a one-line reference to the Kashmir issue earlier that day in his address to the UNGA.

But Jaishankar, being a scholar-diplomat, would know that the Cyprus issue is in the news cycle and the new cold war conditions breathe fresh life into it, as tensions mount in the Turkish-Greek rivalry, which often draws comparison with the India-Pakistan animosity, stemming from another historical “Partition” – under the Treaty of Lausanne (1923) that ended the Ottoman Empire.

The beauty of peace treaties is that they have no “expiration date,” but the Treaty of Lausanne was signed for a period of a hundred years between Turkey on one side and Britain, France, Italy, Greece and their allies on the other. The approaching date heightens the existential predicament at the heart of Turkey’s foreign policy.

The stunning reality is that by July 24, 2023, Turkey’s modern borders will become “obsolete.”

Secret articles of the 1923 treaty signed by Turkish and British diplomats provide for a chain of strange happenings – British troops will reoccupy the forts overlooking the Bosphorus; the Greek Orthodox Patriarch will resurrect a Byzantine mini-state within Istanbul’s city walls; and Turkey will finally be able to tap the forbidden vast energy resources of the Eastern Mediterranean (and, perhaps, regain Western Thrace, a province of Greece).

Of course, none of that can happen and they remain conspiracy theories. Nonetheless, “end-of-Lausanne” syndrome remains a foundational myth and weaves neatly into the historical revisionism that Mustafa Kemal Ataturk should have gotten a much better deal from the Western powers.

All this goes to underline the magnitude of the current massively underestimated drama of which Cyprus is at the epicenter. Suffice it to say, Turkey’s geometrically growing rift with Greece and Cyprus over the offshore hydrocarbon reserves and naval borders must be properly understood in terms of the big picture.

Turkey’s ruling elite believe that Turkey was forced to sign the Treaty of Sevres in 1920 and the Treaty of Lausanne in 1923 and thereby concede vast tracts of land under its domain. Erdogan rejects any understanding of history that takes 1919 as the start of the 1,000-year history of his great nation and civilization.

“Whoever leaves out our last 200 years, even 600 years together with its victories and defeats, and jumps directly from old Turkish history to the Republic, is an enemy of our nation and state,” he once stated.

The international community has begun to pay attention, as Turkey celebrates its centennial next year, which also happens to be an election year for Erdogan. In a typical first shot, the US State Department announced on September 16 – just five days before Jaishankar met with Cavusoglu – that Washington is lifting defense trade restrictions on the Greek Cypriot administration for the 2023 fiscal year.

Spokesman Ned Price said, “Secretary of State Antony J Blinken determined and certified to Congress that the Republic of Cyprus has met the necessary conditions under relevant legislation to allow the approval of exports, re-exports, and transfers of defense articles.”

The US move comes against the backdrop of a spate of recent arms deals by Cyprus and Greece, including a deal to purchase attack helicopters from France and efforts to procure missile and long-range radar systems. Turkey called on the US “to reconsider this decision and to pursue a balanced policy towards the two sides on the Island.” It has since announced a beefing up of its military presence in Northern Cyprus.

To be sure, the unilateral US move also means indirect support for the maritime claims by Greece and the Greek Cypriot administration, which Turkey, with the longest continental coastline in the Eastern Mediterranean, rejects as excessive and violating its sovereign rights and those of Turkish Cypriots.

Whether these developments figured in Jaishankar’s discussion with Cavusoglu is unclear, but curiously, India too is currently grappling with a similar US decision to offer a US$450 million military package to Pakistan to upgrade its nuclear-capable F-16 aircraft.

Indeed, the US-Turkey-Cyprus triangle has some striking similarities with the US-India-Pakistan triangle. In both cases, President Joe Biden’s administration is dealing with friendly pro-US governments in Nicosia and Islamabad but is discernibly unhappy with the nationalist credo of the leaderships in Ankara and New Delhi.

Washington is annoyed that the Turkish and Indian governments preserve their strategic autonomy – most important, the United States’ attempt to isolate Russia has been weakened because of the refusal by Turkey and India to impose sanctions against Moscow.

The US is worried that India and Turkey, two influential regional powers, pursue foreign policies promoting multipolarity in the international system, which undermines America’s global hegemony.

Above all, it is an eyesore for Washington that Erdogan and Indian Prime Minister Narendra Modi enjoy warm, trustful personal interactions with Russian President Vladimir Putin.

The photo beamed from Samarkand during the recent Shanghai Cooperation Organization (SCO) summit showing Erdogan arm in arm with Putin must have infuriated Biden. Modi, too, displayed a rare moment of surging emotions when he told Putin at Samarkand on September 16:

“Personally speaking, in a way, the journey for both of us started at the same time. I first met you in 2001, when you were working as the head of the government and I had started working as head of the state government. Today, it has been 22 years, our friendship is constantly growing, we are constantly working together for the betterment of this region, for the well-being of the people.

“Today, at the SCO Summit, I am very grateful to you for all the feelings that you have expressed for India.”

Amazingly, the Western media censored this stirring passage in its reports on the Modi-Putin meeting.

Notably, after the meeting between Modi and Erdogan in Samarkand on September 16, a commentary by the state-owned TRT titled “Turkey-India ties have a bright future ahead” signaled the Erdogan government’s interest in moving forward in relations with India.

India’s ties with Turkey deserve to be prioritized, as that country is inching toward BRICS and the SCO and is destined to be a serious player in the emerging multipolar world order.

Symptomatic of the shift in tectonic plates is the recent report that Russia might launch direct flights between Moscow and the Turkish Republic of Northern Cyprus, a state supported and recognized only by Ankara. (Incidentally, one “precondition” set by the Biden administration to resume military aid to Cyprus was that Nicosia should roll back its relations with Moscow.)

Without doubt, the US and the European Union are recalibrating the power dynamics in the Eastern Mediterranean by building up the Cyprus-Greece axis and sending a warning to Turkey to know its place. In geopolitical terms, this is another way of welcoming Cyprus into the North Atlantic Treaty Organization (NATO). Thus it becomes part of the new cold war.

Can South Asia’s future be any different? Turkey has many advantages over India, having been a long-standing Cold War–era ally of the US. It hosts Incirlik Air Base, one of the United States’ major strategically-located military bases. Kurecik Radar Station partners with the US Air Force and Navy in a mission related to missile interception and defense.

Turkey is a NATO power that is irreplaceable in the alliance’s southern tier. Turkey controls the Bosphorus Strait under the Montreux Convention (1936). Yet the US is unwilling to have a relationship of mutual interest and mutual respect with Turkey.