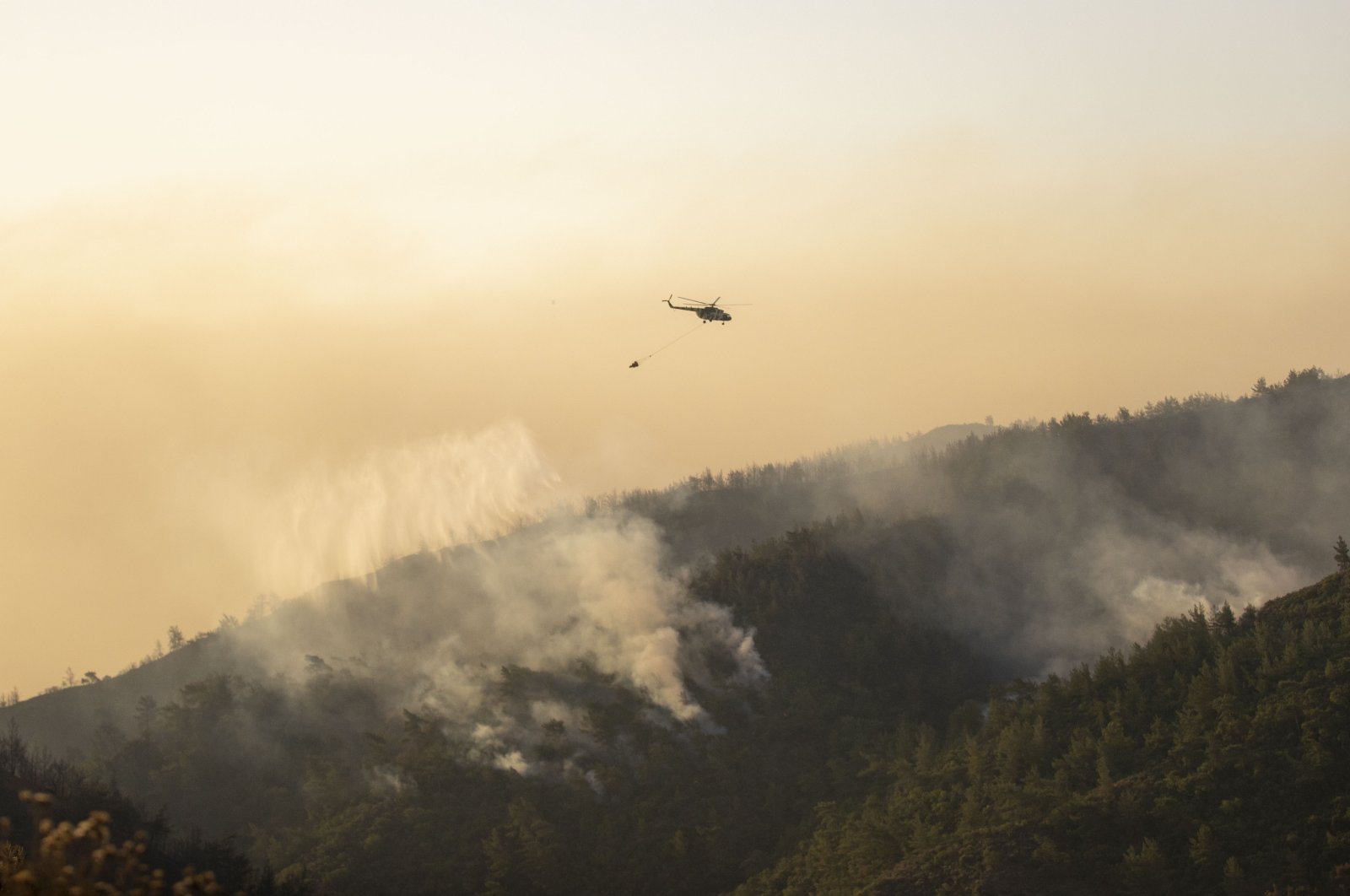 Two days after it broke out, a wildfire spreading across a green patch of the southwestern town of Marmaris aggressively lingered. Firefighters battled the wildfire in Muğla province from land and air on Thursday, as hopes that the blazes were contained fizzled after they spread again due to high temperatures and windy conditions.

Scenes of burning woodland near the Aegean coastal resort of Marmaris sparked fears of a repeat of last year’s fires that devastated tens of thousands of hectares (acres) across the region.

The wildfire mobilized everything, everyone, from professional firefighters to volunteers, from fire airplanes and helicopters dousing water on flames to police water cannon vehicles joining efforts on the land. In the meantime, the blaze spread through the forest in the sparsely populated area in the town’s Bördübet neighborhood as a plume of smoke hung over the area.

The cause of the fire, which began at around 8 p.m. (5 p.m. GMT) on Tuesday is not clear. After fighting flames throughout Wednesday, crews paused the work as the darkness set in, only to resume it on Thursday morning.

Agriculture and Forestry Minister Vahit Kirişçi, who has been in the area since the fire broke out, said Wednesday that the fire was under control but later said it had spread again, fanned by wind and hot weather. Some 151 people from 51 houses were evacuated as a precaution, he said, adding that some 2,600 people were working to contain the fire. The Directorate of Forestry said that 27 helicopters and 14 planes would be involved in tackling the fire on Thursday.

Human-induced climate change is making heat waves more likely and more severe, scientists say. Last summer’s wildfires, most of which were also near Marmaris, were the most intense in Turkey on record, a European Union atmosphere monitor said last year, adding that the Mediterranean had become a wildfire hot spot.

Kirişçi told reporters that the Turkish Armed Forces also aided the efforts, providing seven helicopters and crews, were working hard. “It is not a fire out of control but it is not controlled entirely either. We are somewhere in the middle,” he said. He confirmed earlier reports that the fire covered an area of 200 hectares and it “grew a little beyond” this area now. He cited uneven terrain as one of the challenges to extinguishing efforts but highlighted that temperatures and strong winds have been bigger challenges affecting their work.