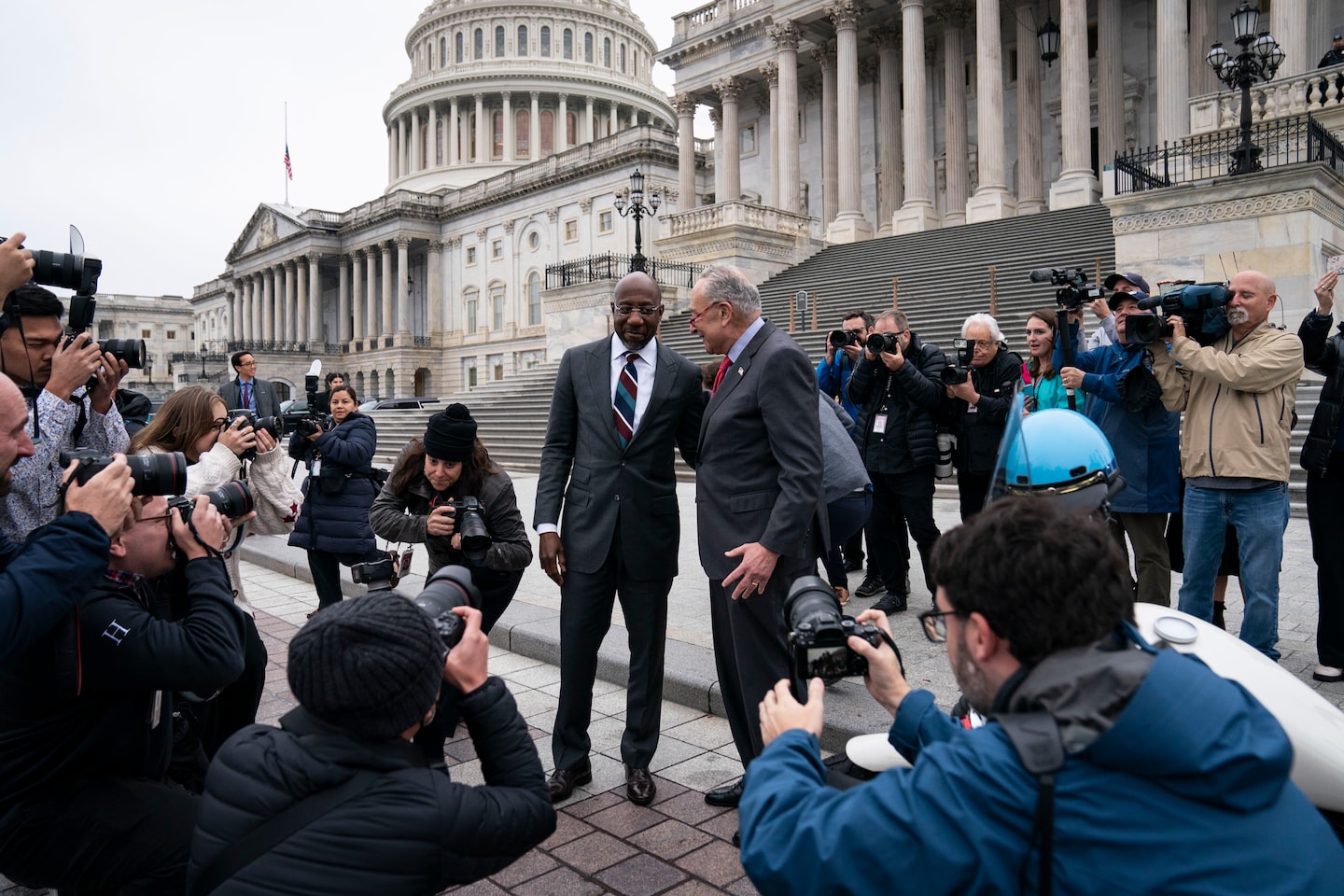 The expanded majority comes just as the House is poised to flip to Republican control and readies itself to block Democratic measures the Senate manages to send its way.

Nonetheless, the Senate majority leader said the extra senator means “we can breathe a sigh of relief” and joked that Vice President Harris would no longer need to spend so much time shuttling back and forth between the White House and the Capitol to serve as a tiebreaking vote.

In the 50-50 Senate, Democrats and Republicans were split evenly on committees, meaning Republicans could band together and force a full Senate floor vote to clear nominees or legislation they opposed from a committee. Now, Democrats will take the majority on committees, meaning precious floor time that was once eaten up on those so-called discharge votes will now be freed up to conduct other Senate business.

“It makes all the difference in the world,” said Sen. Richard J. Durbin (D-Ill.), the chair of the Judiciary Committee.

“Right now in 50-50 … it’s a very slow process,” added Sen. Gary Peters (D-Mich.), the chairman of the Homeland Security Committee. “You can’t move folks through as quickly as we should. It’s really critical that we fill key positions.”

The Senate has had to vote to discharge nominations 24 times this Congress, with 22 still waiting, according to Schumer’s office.

Having the majority in committees also comes with subpoena power, which opens up the possibility that Senate Democrats could seek to counterbalance the aggressive oversight investigations Republicans plan to launch next month in the House, when they take power there.

Schumer declined to specify what oversight targets Senate Democrats would pursue, but suggested “corporate corruption and inequities and other problems throughout the country” would be among them.

The extra seat also gives Democrats some wiggle room should a member fall ill or be unable to attend in person ahead of a crucial vote, a distinct possibility given the advanced age of many in the chamber.

But perhaps most interesting to the power dynamics of the Senate is the way in which an expanded majority dilutes the power of moderate Democratic senators, including Joe Manchin III (W.Va.), to object to legislation that Democrats are able to pass with just 50 votes. The moderate was sometimes dubbed “President Manchin” given how much sway he had over legislation Biden and Schumer wanted to pass through the budget reconciliation process, where his vote was necessary to clear the 50-vote hurdle. (Most legislation must pass with 60 votes, to avoid a filibuster.)

With the House, however, flipping to GOP control in January, it will be far less likely that any party-line legislation would make it to Biden’s desk anyway. Many House Republicans ran on a platform of blocking Biden’s agenda and cutting back the federal government’s spending.

Republicans downplayed the significance of the Democrats’ newly padded majority, pointing out that the House will serve as a check on liberal legislation originating from the Senate next year.

“It just means it’s a little easier for Democrats to confirm their nominees,” said Sen. John Cornyn (R-Tex.). “Beyond that it doesn’t mean much. You still gotta get 60 votes to move legislation, and as long as the filibuster is intact the Democrats won’t be able to pass any reconciliation bills because of the House. So I think we’re pretty much where we were before.”

Schumer has declined to lay out a Democratic agenda for next year but has urged Republicans to cross the aisle and work with him and his party.

On the campaign trail, Warnock at times hyped up how having a 51st Democratic seat in the Senate would open more possibilities for what the party can get done in Washington.

At the rally, he explained that having 51 Democrats could have made a difference in those debates, as Democrats ultimately got on board with a voting rights bill but did not all agree to suspend the filibuster rule that requires 60 votes to pass most legislation.

Sabrina Rodriguez and Leigh Ann Caldwell contributed to this report.

Can you guess the ex-Chelsea midfielder that caught a nine-stone catfish?