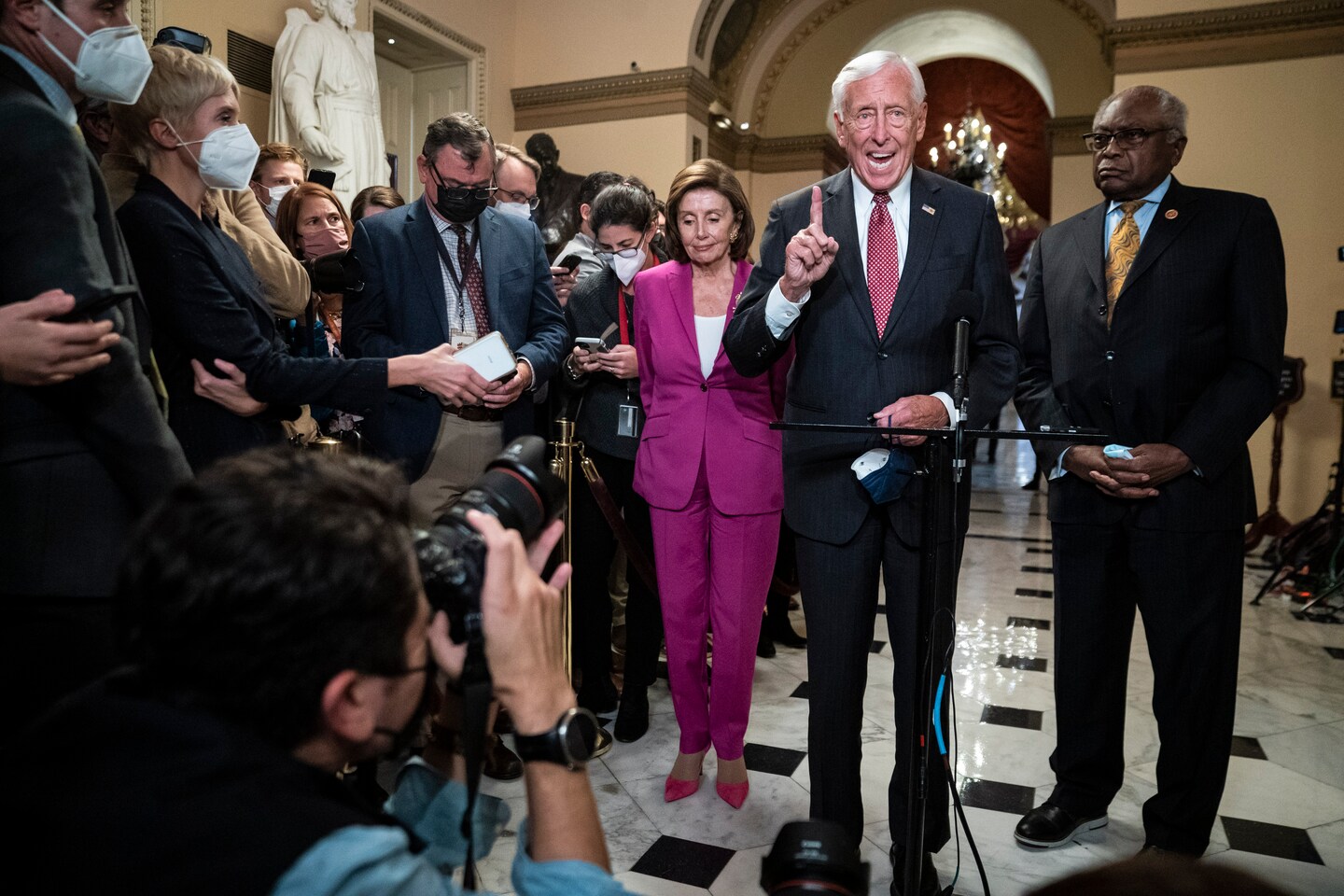 House Majority Leader Steny H. Hoyer has been doing a lot of reflecting these days. A central theme that he adopted 20 years ago upon first getting voted into the No. 2 position in the Democratic caucus has been on his mind lately.

Two decades later, in the wake of House Speaker Nancy Pelosi’s decision to step out of leadership, Hoyer announced he, too, would step back, as did their longtime wingman, Rep. James E. Clyburn (D-S.C.).

Pelosi (D-Calif.) has been understandably hailed as a historic figure for breaking Congress’s glass ceiling and also for marshaling major legislative accomplishments into law during two separate stints as House speaker.

But a key to that success came from how the triumvirate worked in coordination to find consensus, especially as the Democrats in Congress grew more diverse in terms of race, ethnicity, sex and sexual orientation, geography and philosophy.

Pelosi, 82, rose to power through the party’s liberal coastal power centers: from a childhood in a Baltimore political dynasty to an adult life connected to the West Coast’s new technology sectors that now fuel Democratic financial engines. Clyburn, 82, came up in the civil rights movement and became the Congressional Black Caucus’s longest-tenured member in a top leadership post, making him a moral center of gravity.

Hoyer, 83, the only straight White male to occupy one of the top seven spots in Democratic leadership during the past four years, has long had ties to more moderate factions in swing seats from the Blue Dog and New Democrat coalitions.

If Pelosi pushed something favored by caucus liberals, the moderates would bend Hoyer’s ear about their complaints. And if Pelosi angered members of the CBC — as she did several times over the years while considering rule changes like term limits on committee chairs — its members would call Clyburn to vent.

“We could talk to almost anybody in the caucus and have them feel that we were sympathetic to them and listening to them and try to accommodate their interest. And she could do that, I could do it, Jim could do it. And I think, frankly, the three of us covered the entire caucus,” Hoyer said.

Nancy Pelosi reflects on two decades at the top

That unity led to extensive accomplishments that included the passage of the Affordable Care Act; rewriting criminal justice laws in 2018; the passage of nearly $5 trillion in funding to battle the coronavirus over the past three years; and a sweeping party-line agenda last summer that included more than $300 billion to battle climate change.

Hoyer and Clyburn had a private discussion about a month before the midterm election about their futures. Each decided, individually, that the time was right to allow the next generation of Democratic leaders — Reps. Hakeem Jeffries (N.Y.), Katherine M. Clark (Mass.) and Pete Aguilar (Calif.) — to take the reins, particularly as they expected Republicans to win the majority.

“We agreed this was a good time for us. I think if we’d been in the majority, we may have made another judgment, but it wasn’t another time,” Hoyer said during a 40-minute telephone interview, as he prepared for a Thanksgiving weekend with family at his home in St. Mary’s County, southeast of Washington along the Potomac River.

On a sunny day, he guessed there were about 100 geese on the water, adding a sense of calm to his decision to return, for at least the next two years, to the life of a rank-and-file member.

Hoyer hopes the new trifecta can replicate the balance of the outgoing big three — assuming all three win races next week for which they have no competition. Jeffries, 52, would make history as the first Black leader of any of the four House and Senate caucuses; Clark, 59, has roots in the Congressional Progressive Caucus; and Aguilar, 43, will become the highest-ranking member of the Congressional Hispanic Caucus in more than 17 years.

They hail from three states — New York, Massachusetts and California — that account for almost a third of the Democratic caucus members.

“They have a pretty broad reach,” Hoyer said, predicting that starting in the minority will be easier for them to learn the ropes. “They’re going to be establishing those relationships because now their particular roles are enhanced.”

This new crop of leaders has a very distinct difference from the outgoing trio: almost four years of working together behind-the-scenes to move up the ladder in the Jeffries-Clark-Aguilar order.

Pelosi and Hoyer first met each other when they were junior staff members in a Senate office almost 60 years ago. The two have been internal caucus rivals since they spent three years in an internal leadership race that ended in October 2001 with a vote for House minority whip: Pelosi 118, Hoyer 95. Her victory signaled the caucus’s shift away from its anchor in Midwestern manufacturing hubs toward the coasts and the professional class in suburbs outside big cities.

When she was promoted to minority leader a year later, Democrats made a practical match by elevating Hoyer to whip without any opposition. Pelosi tried to strike back at Hoyer when Democrats won the majority in the 2006 midterm elections, backing her staunch ally, the now-late John P. Murtha (D-Pa.), over Hoyer for majority leader — only to watch her nemesis win in a landslide of almost 65 votes.

Even her California allies liked the balanced ticket. “A great leadership team, let’s keep it in place,” Rep. Henry A. Waxman (D-Calif.) said during a nominating speech for Hoyer in 2006.

For years to come, they both knew he could not defeat her to become No. 1, yet she could not find anyone to beat him as No. 2.

“I had an independent base,” Hoyer said Tuesday, recalling that he felt a lasting sense of power from his resounding 2006 victory. “The caucus was responsible for electing me, not anybody else.”

Over their tenure, there has been a deep diversification among Democrats in Congress. As she noted in her Nov. 17 speech announcing her retiring from leadership, just 12 women were in the caucus when Pelosi won a special election in 1987. Today, there are more than 90.

According to her estimates, 75 percent of the 213 Democrats next year will be women, people of color or from the LGBTQ community.

But that growing diversity isn’t the biggest change Hoyer has seen.

“No, I think the biggest change in the institution is how confrontational Republicans have become,” said the Democrat usually considered the make-nice guy, with open lines of communication to Republicans.

Hoyer’s biggest personal achievement came in 1990 when he was the lead sponsor of the Americans With Disabilities Act, working hand-in-hand with Rep. Steve Bartlett (R-Tex.) on a bill signed into law by a Republican president, George H.W. Bush.

The beginning of that radicalization of the GOP came when John A. Boehner and Paul D. Ryan as Republican speakers could barely govern amid a right-flank rebellion. “That’s the biggest change,” he said.

After the Jan. 6, 2021, attack on the U.S. Capitol, Hoyer delivered a fiery speech when the proceedings resumed. He did not extend an olive branch but instead condemned Republicans who supported the attempt to overturn the election.

“All they will accomplish is to further the dangerous divisions,” Hoyer said, noting that these remarks had been “written before this Capitol was assaulted” by radical conservatives.

Hoyer will go down in history as the Democrat who served the longest as No. 2, both as majority leader and minority whip, without ever climbing to the top post.

He said that “within the last six, eight years,” he came to understand that the top job wasn’t likely to come his way. “Would I have liked to have been the speaker? Of course. … I don’t know that I could have done any better job than Nancy Pelosi. I don’t know that anybody could have,” he said.

Yielding to the younger generation is a career that’s come full circle for Hoyer, who spent his early years known as the ultimate young man in a hurry. He won a state Senate seat in 1966, at 27, and lost a statewide contest for lieutenant governor in 1978, winning a House special election in 1981 that set him on this path for more than four decades.

He lost a 1991 leadership race to become majority whip when the older class of Democrats considered him too ambitious.

Another 11 years later, he was promoted to minority whip, behind Pelosi. A few years later, Clyburn would join the trio. They consider their work these past two years, with a narrow majority that has allowed just three or four votes to spare, their most impressive, tactically speaking.

It was not pretty at times, but they eventually got a very large chunk of the agenda approved.

“We all worked hard at it,” Hoyer said, “and the psychology of consensus held.”