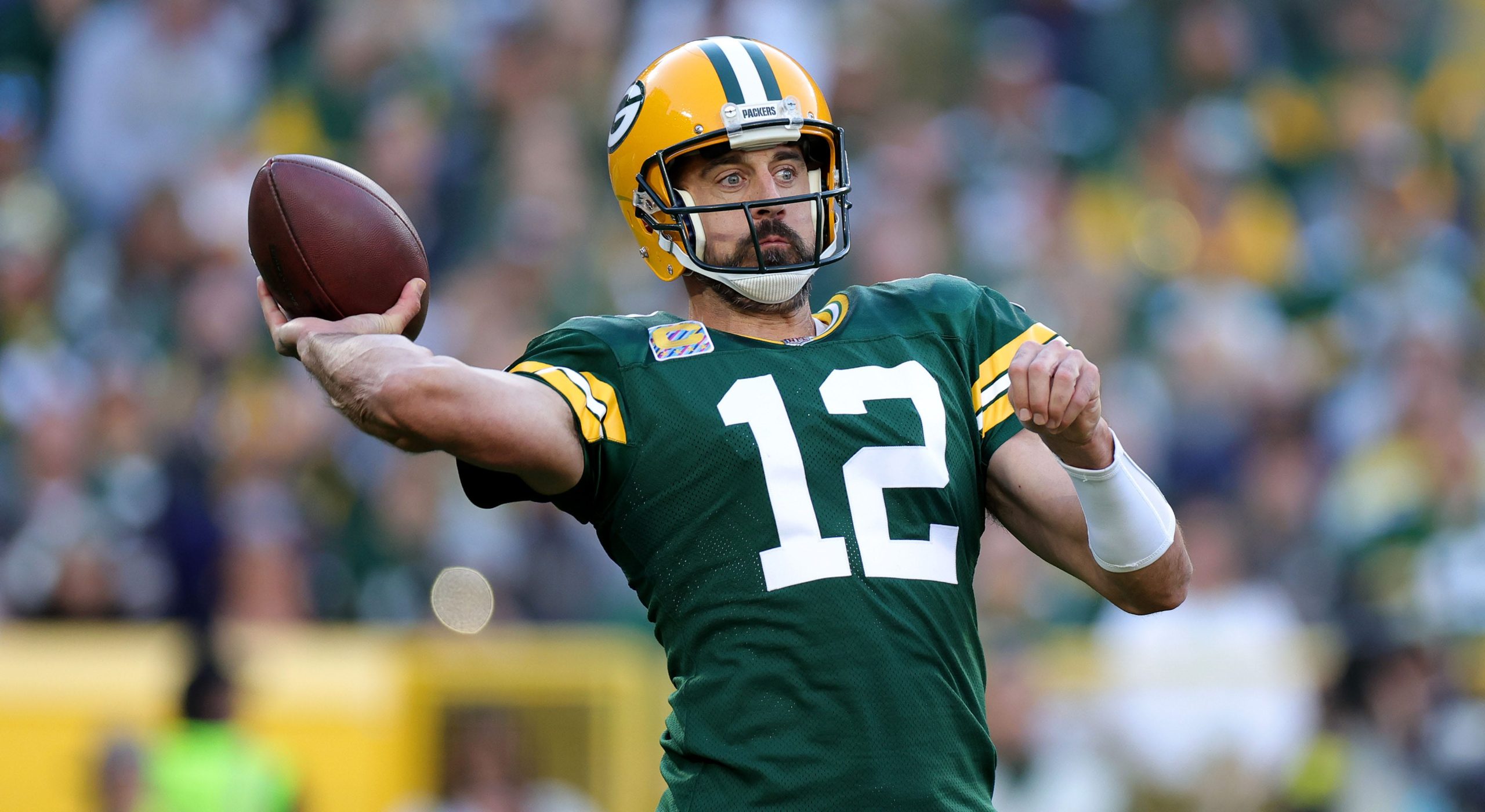 Aaron Rodgers got the ball twice in overtime, and history has shown that to be futile to his opponent as he led a Green Bay Packers drive to secure the win over the New England Patriots, 27-24.

The Packers had to stop the Patriots after coming up short on their first overtime drive, and they did just that, forcing a punt and giving Rodgers a chance to just need a field goal to win it. Mason Crosby would kick through a 31-yarder after 12 plays downfield.

Rodgers didn’t just notch another game-winning drive for his Hall of Fame-worthy career, but he also threw his 500th career touchdown in this third win for Green Bay on the season.

Romeo Doubs of the Green Bay Packers celebrates with fans after a touchdown during the fourth quarter at Lambeau Field on Oct. 2, 2022, in Green Bay, Wisconsin.
(Patrick McDermott/Getty Images)

His 13-yard strike to Romeo Doubs to tie the game at 24 in the fourth quarter put him fifth all-time in passing touchdowns in NFL history.

But, as overtime tells, this was no easy game for the Packers despite Mac Jones not being active with a high ankle sprain. Veteran backup Brian Hoyer began the game as the Patriots’ starter, but a head injury knocked him out for the rest of the way.

Third-string quarterback Bailey Zappe, a fourth-round pick out of Western Kentucky in April, had to take over for the remainder of the game, and he didn’t falter.

Zappe put together back-to-back touchdown drives for the Patriots, taking a 24-17 lead in the second half. Rodgers’ pass to Doubs had it tied.

Bailey Zappe of the New England Patriots reacts to a touchdown during the fourth quarter against the Green Bay Packers at Lambeau Field on Oct. 2, 2022, in Green Bay, Wisconsin.
(Stacy Revere/Getty Images)

Doubs had an opportunity, though, to win the game for the Packers as Rodgers perfectly placed a deep ball down the right sideline into his arms with less than two minutes to play. While he had it wrapped up, the receiver didn’t come down cleanly with the ball, forcing an incompletion.

Rodgers finished the game with 251 yards through the air on 21-for-35 with two touchdowns and an interception that went for six points just before the end of the first half. Jack Jones jumped a route and picked him off to give the Patriots the lead after two quarters.

Aaron Jones also set the tone on the ground with fellow back A.J. Dillon, as he rushed for 110 yards on 16 carries while Dillon had 17 carries for 73 yards.

Allen Lazard had 116 yards on six catches to lead the Packers in the receiving department. Robert Tonyan, the Packers’ tight end, found the end zone for the first time this season for their first score of the game.

Zappe would finish with 99 yards on 10-for-15 through the air. Damien Harris rushed for 86 yards and a touchdown to lead the Patriots on the ground.

Aaron Rodgers of the Green Bay Packers attempts a pass during the third quarter against the New England Patriots at Lambeau Field on Oct. 2, 2022, in Green Bay, Wisconsin.
(Stacy Revere/Getty Images)

The Packers will head overseas to face the New York Giants in London next week for the early game of the week.

New England, now 1-3 on the season, will face the Detroit Lions at Gillette Stadium next Sunday.