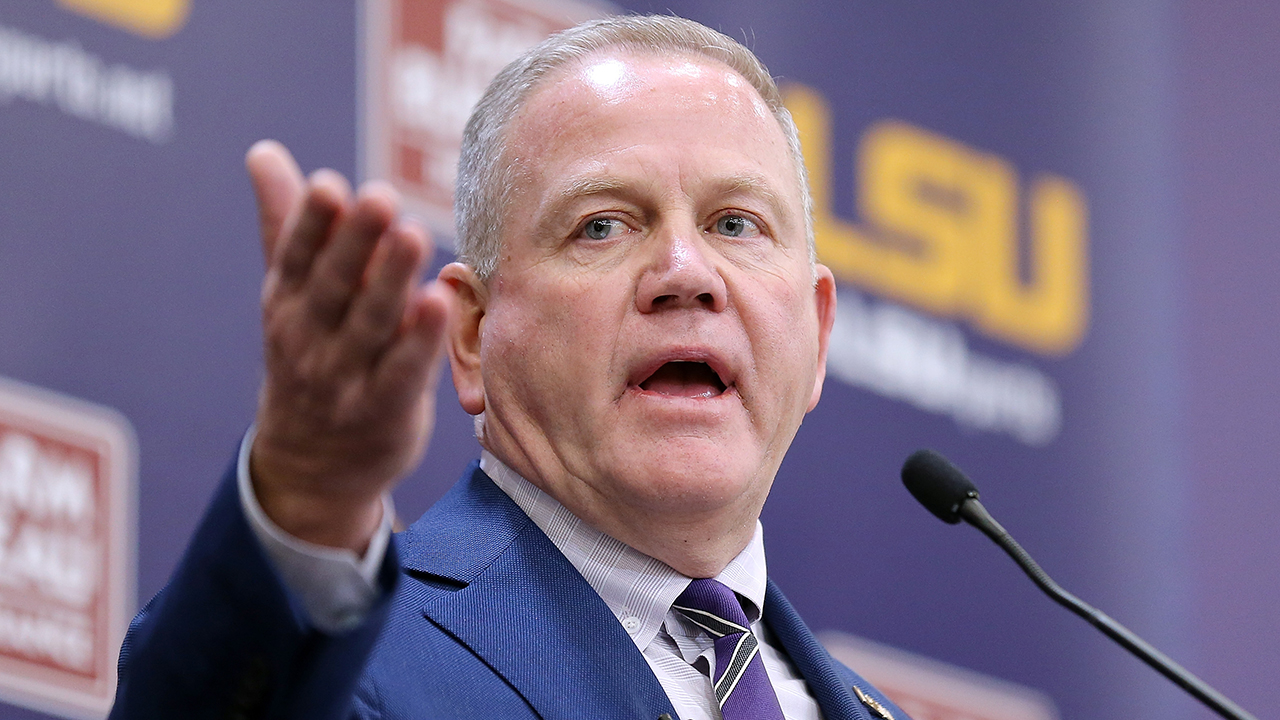 New LSU head football coach Brian Kelly has heard a lot of noise in his career and, like many college football coaches, has suffered agonizing defeat at the hands of Nick Saban.

And now, Kelly’s excited to have the chance to turn over a new leaf in a new state and in a new conference. He recently sat down with Varsity House Podcast and made refreshingly honest admissions about his motivation and goals for his career at LSU.

New LSU football coach Brian Kelly gestures to fans after his arrival at Baton Rouge Metropolitan Airport, Tuesday, Nov. 30, 2021, in Baton Rouge, La. Kelly, formerly of Notre Dame, is said to have agreed to a 10-year contract with LSU worth $95 million plus incentives.
(AP Photo/Matthew Hinton)

“It was the challenge,” Kelly said. “It was the ultimate challenge to come down here after being in the Midwest my entire career where most people said, ‘Well, you can’t do that. You can’t go down there and win in the SEC. You’re not from there.’”

Anyway, as might be expected, Kelly also referenced Saban by name.

Nick Saban the head coach of the Alabama Crimson Tide against the Georgia Bulldogs at Lucas Oil Stadium on January 10, 2022 in Indianapolis, Indiana.
(Andy Lyons/Getty Images)

I hate to state the obvious, but playing him in the post-season didn’t work out so well for Kelly, who while still at Notre Dame, lost 42-14 in a BCS national championship game a decade ago and 31-14 in the College Football Playoff semifinal back in January.

But perhaps a regular-season game with lower stakes and less pressure will yield better results for Kelly, who has bigger ambitions than just taking down the Tide.

Kelly says that “the alignment of an athletic director and president” at LSU provides “all the resources necessary to win a national championship.”

Though I’m skeptical that Notre Dame couldn’t provide those resources, I can’t blame Kelly for taking a new approach for the shot at a national championship. He’s 60 years old and likely won’t have a better opportunity.

Brian Kelly speaks after being introduced as the head football coach of the LSU Tigers during a news conference at Tiger Stadium on December 01, 2021 in Baton Rouge, Louisiana.
(Jonathan Bachman/Getty Images)

He left Notre Dame with an impressive 92-39 overall record, and now we’ll see how he fares in the Bayou down south. LSU kicks off their season on Sunday, Sep. 4 against Florida State, and they face Alabama and Nick Saban at home Saturday, Nov. 5.

The haters have already marked their calendars.