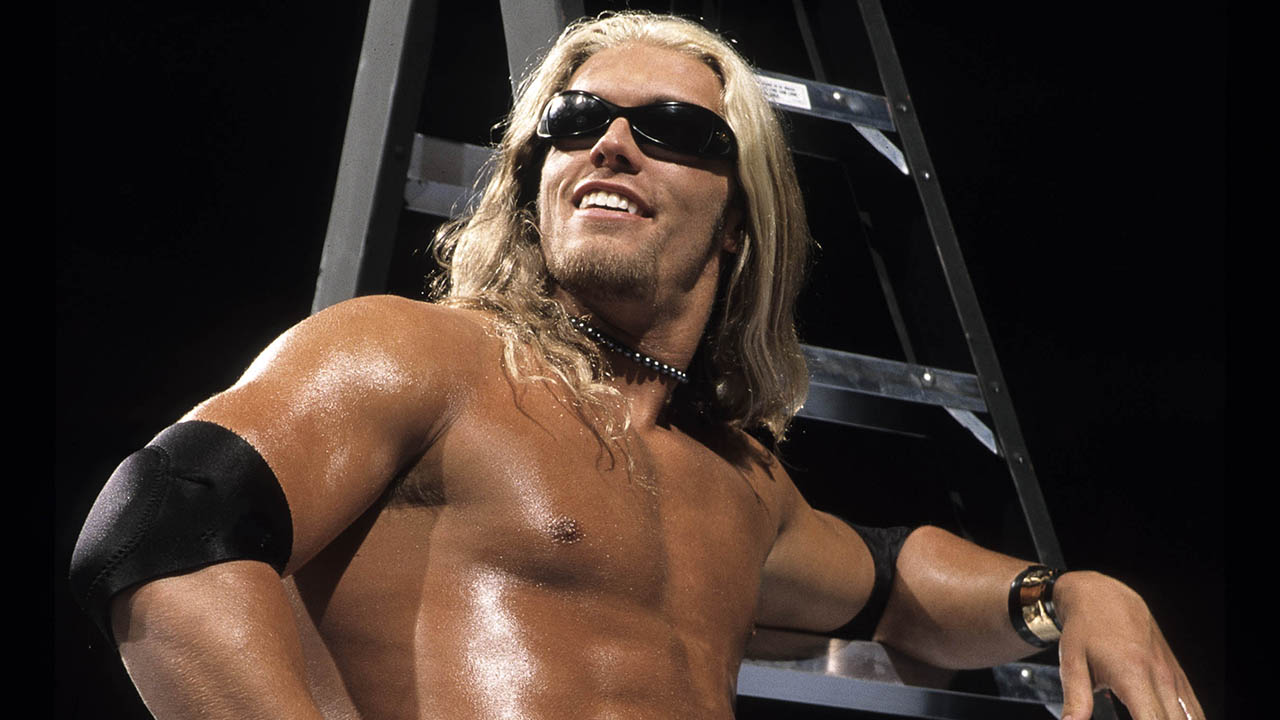 Edge had one of the most recognizable entrance theme songs early in his WWE career.

“You Think You Know Me” would play in packed arenas and stadiums during live shows, tapings and pay-per-views and fans would instantly know who was coming to the ring.

On Sunday, the WWE universe will get to know Edge a little bit better when his episode of “Biography WWE: Legends” premieres on A&E.

The 48-year-old’s journey to WWE (formerly known as the World Wrestling Federation) was filled with some twists and turns.

He met his best friend, Jay Reso (known in pro wrestling as Christian), when he was about 10 years old, and the two quickly bonded over pro wrestling and dreams of getting into the squared circle while growing up in Orangeville, Ontario, Canada. The two would watch their first event together at Maple Leafs Gardens in Toronto and later Edge would watch WrestleMania VI at the Toronto SkyDome.

At that point, it clicked.

Edge gets ready for a spear.
(WWE)

“It was all of the things that I love. I loved superheroes, I loved music and I loved sports. So, when I saw wrestling, it was all of those things because these larger-than-life characters had colorful outfits that would be in comic books,” Edge, whose real name is Adam Copeland, told Fox News Digital in a recent interview.

“They had entrance music and like pyro and stuff, so it’s a Kiss concert. And, they’re doing these things that I equate it to like a hockey game or a football game — just an athletic performance. It tapped into all the things that my little-kid brain loved. I just never grew out of the little-kid brain.”

Edge’s career would get kick-started by happenstance.

He saw an advertisement in the Toronto Sun for an essay content on “Why I want to be a professional wrestler?” He wrote an epic tale about his dreams and goals and eventually won the contest, earning a chance to train with professional wrestlers Sweet Daddy Siki and Ron Hutchinson.

“I understand that, for me, my life is awesome,” he said. “I did the only thing I ever wanted to do, which was be a wrestler and succeeded at it. I constantly sit back and reflect. And I think losing the career for nine years made me appreciate it even more and getting it back.”

Bret Hart had a big impact on Edge’s early career as well. Known as “The Hitman” in the wrestling ranks, the Calgary native appeared on the Canadian talk show “The Dini Petty Show.” Edge happened to be at the taping and was able to get some sound advice from Hart, who told him to keep at his dream.

“It was massive because he was WWF champion at that point. It was huge. And I considered him the best in the world, so for me to get that encouragement and also understanding that he couldn’t give me the answers to the test because there weren’t any answers, and there aren’t really any answers,” he said. “You just have to go keep plugging away.”

Edge said Hart’s advice to him at the time helped him foster some parting wisdom on younger guys who ask him for some pointers.

WWE LEGEND KURT ANGLE OPENS UP ABOUT JOURNEY TO SUPERSTARDOM, BATTLE WITH ADDICTION: ‘I WANT TO HELP OTHERS’

“I would never turn someone away, and I think a lot of that comes from following Bret’s example and understanding like you’re some 18-year-old kid sitting in the crowd at ‘The Dini Petty Show’ with a bad mullet and a biker jacket, and he found me. And eventually, like a year, year and a half, maybe two years later, I find myself at his house and getting in the ring with him. A lot of what happens happens because Bret takes an interest.”

Edge would hit the independent circuit and train with Hart, honing his in-ring skills and athleticism before making his debut on WWE TV. He received a developmental contract in 1997 and made his debut in 1998.

With a universe filled with guys like The Rock, Mankind, Hunter Hearst Helmsley, Kane, The Undertaker and “Stone Cold” Steve Austin, he came out as Edge and billed as a tortured soul. But why “Edge?”

“I actually came up with Edge. I would have preferred Adam Copeland, but that wasn’t the way it really worked then, right? I was doing dark matches, and Don Callis and I were driving and the radio station, it was in Albany and it was ‘Edge 1-0-something,’ and growing up in Toronto, Edge 102 was always one of my favorite stations,” he said.

Edge gets ready for a ladder match.
(WWE)

“I was like, ‘Hmm, that has a bit of a rock ‘n’ roll feel to it, Edge.’ They were tossing around names like Rage, Riot, and you know it was the late ‘90s, right? I just thought, ’Edge, I’ll throw that out there.’ At least that’s something I could relate to a little bit better. And it stuck.”

Edge’s career would gain significant traction when he teamed up with Gangrel and his lifelong friend, Christian, and they would become known as The Brood. After The Brood disbanded, Edge and Christian would have one of the most memorable tag-team runs in WWE history.

Edge and Christian won the world tag-team championship seven times. The two would feud with The Hardy Boyz and the Dudley Boyz and create some of the most iconic matches in pro wrestling history. Ladder matches and tables, ladders and chairs matches were developed. In at least one spot, Edge would jump from one ladder and spear Jeff Hardy who was dangling from the belt buckle several feet above the ring.

While success as a tag team and as a singles competitor in the mid-card was one thing, Edge didn’t get a real opportunity to pursue a WWE Championship until 2006. He was the first-ever Money in the Bank winner in the company’s history and cashed it in against John Cena at New Year’s Revolution.

Then known as the “Rated-R Superstar,” Edge would rocket to the top of the company. He would become a seven-time world heavyweight champion and a four-time WWE champion at the height of his career.

Edge embraces the crowd in the ring.
(WWE)

Serious injuries would put a roadblock on any further championship wins. Edge was diagnosed with cervical spinal stenosis, fearing that one bump or jolt could paralyze or even kill him. He would appear in limited roles on screen between 2011 and 2019.

WWE’S BIANCA BELAIR PLEADS WITH FANS TO STOP FOLLOWING HER FROM VENUE AFTER INCIDENT: ‘I WAS LEGIT SCARED’

It wasn’t until 2020 that he was cleared to perform again. Edge made a shocking return at the Royal Rumble. It was the largest pop of the night.

“I expected if we could keep it as under wraps as we could, then, yes, just for the sheer shock of it,” he told Fox News Digital when asked whether he expected the wild crowd reaction.

“Because, just like everyone, I assumed that it’s done,” he said of what he thought of his wrestling career at the time. “So, because of that, I assumed there would be a pretty shocked response, and then you do it in a stadium and chances are there’s going to be a pretty good reaction. Even though I thought that, it still doesn’t really prepare you for every emotion that really jolts through your system at that point. I kind of felt like I got hit by lightning in a good way.”

Edge would later come back as a regular and feud with Randy Orton, The Miz and A.J. Styles. He would be the leader of the faction The Judgement Day before getting turned on and starting his feud with the members of that group.

He said he hoped fans who tune in to watch his mini-documentary and make their own conclusions about his career and pursuit of his wrestling dreams.

The 5 global stocks experiencing a ‘de-globalization’ trend, according to HSBC