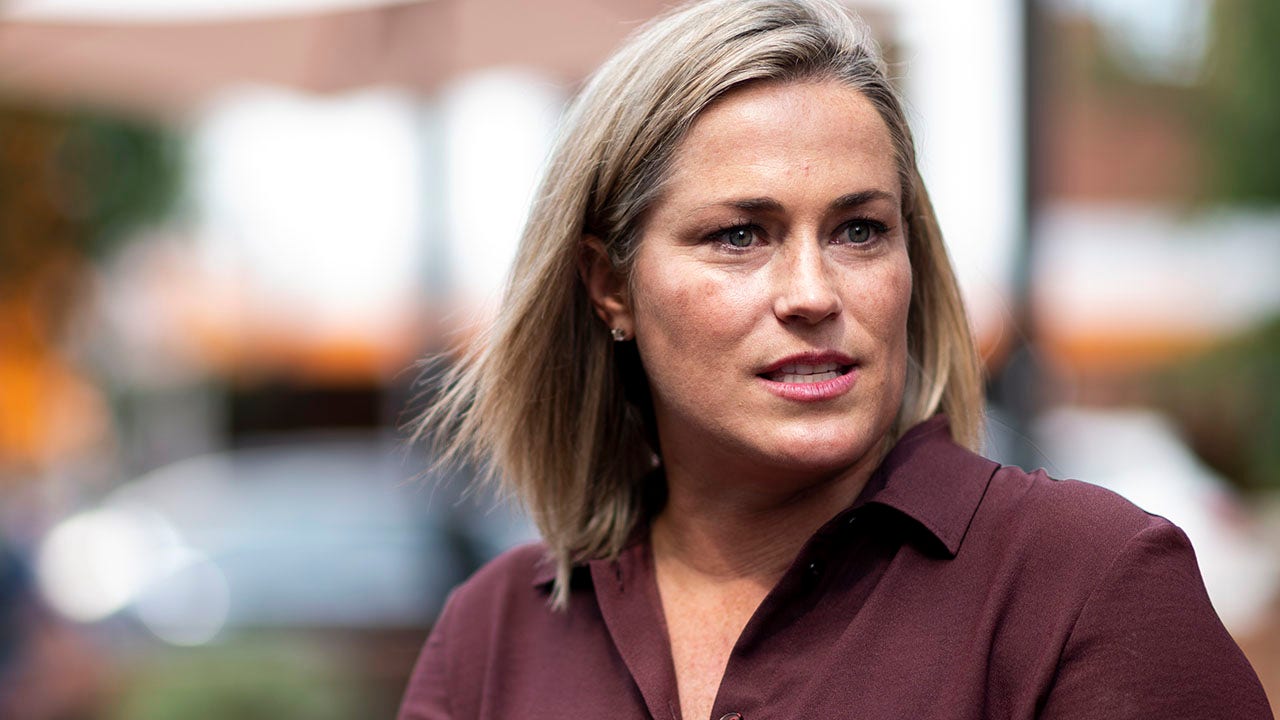 A Republican U.S. Senate candidate in Washington faced a lawsuit from the Seattle Seahawks for using the team’s corporate logo in one of her campaign advertisements.

When Smiley mentioned the rising cost of beer, her husband John asks, “Are you kidding me?”

A general view as the Atlanta Falcons play the Seattle Seahawks during the second half of the game at Lumen Field on Sept. 25, 2022 in Seattle, Washington.
(Jane Gershovich/Getty Images)

Scotty Smiley was wearing a Seahawks jersey that briefly appeared to show the blue, gray and green associated with the NFL team. Retired Maj. Smiley was the first blind active-duty soldier in the U.S. Army and the Seahawks honored him in November 2014 for the NFL’s Salute to Service campaign. He raised the No. 12 flag for Seattle before the team took on the New York Giants.

Scott Smiley lost his eyesight due to a car bomb while he was serving in Iraq. He received a Purple Heart.

Days after the original advertisement aired, the Seahawks sent a cease-and-desist letter to the Smiley campaign claiming they were infringing on their trademarked logo.

Brandi Kruse, a political commentator, pointed out a few other instances of candidates running for political office using the Seahawks logo in ads and other social media posts.

The Smiley Campaign altered the “Gameday” advertisement. The campaign also had issues with The Seattle Times and Starbucks over use of corporate logos.

MLS PLAYER UNDER FIRE OVER POLITICAL CARTOON POST, COACH SAYS ‘A LOT OF PEOPLE WERE HURT’

President Donald Trump greets US Army Maj. Scott Smiley (Ret.), who was blinded during the Iraq War, and his wife Tiffany at the National Prayer Breakfast on Feb. 8, 2018 in Washington, DC.
(Mike Theiler-Pool/Getty Images)

Kristian Hemphill, a campaign manager for Smiley, hit back at corporations in a news release on Friday.

“Tiffany Smiley didn’t back down when she was bullied by federal bureaucrats working against her fight to help her husband Scotty become the first blind active-duty Army officer,” Hemphill said in a statement. “Woke corporations thought they could help Patty Murray by bullying Tiffany with senseless legal threats. Their efforts have both failed and backfired. This campaign will continue to hold to account the failures of a three-decade incumbent and offer Washingtonians a path from crisis to hope, just as Tiffany did for Scotty and countless other injured veterans.”

Murray’s campaign responded in a statement to the Seattle Times.

One of Seattle’s other professional sports teams was also drawn into the spotlight last week.

Xavier Arreaga, an Ecuadorian defender for the Seattle Sounders, came under fire last week after sharing a political cartoon showing a television effectively brainwashing children while parents appear to be silenced and held against the wall.

The initial post, which was shared on the soccer player’s Instagram Stories from the account of Christian rapper Redimi2, appeared to try to illustrate the media’s effect on children when it comes to gender identity. Rainbow-colored waves are seen entering the children’s brains.

Arreaga would later delete the post and shared an apology message on his own account but not before he was labeled as homophobic among other things, according to 770 KTTH Radio.

Sounders head coach Brian Schmetzer spoke about Arreaga to the media and said he would sit down with Arreaga to tell him what he posted “wasn’t correct.” Arreaga was training with the Ecuadorian national team and has been away from the Sounders.