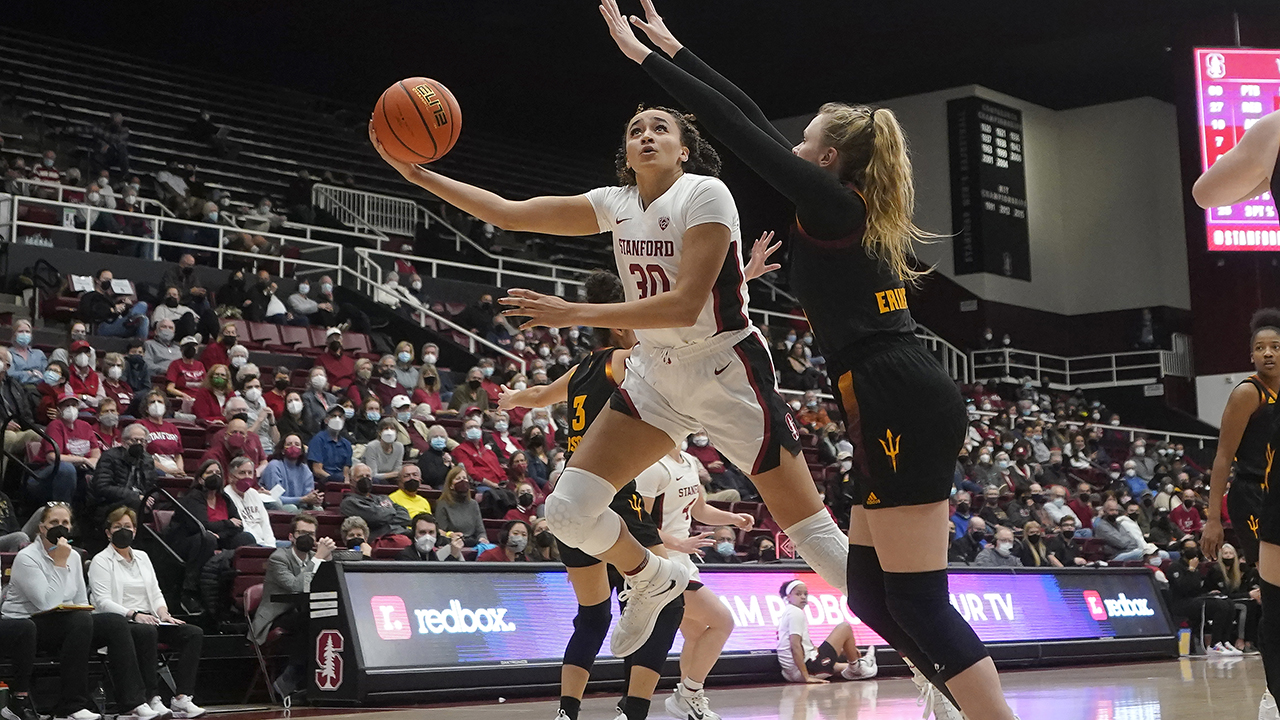 Haley Jones and her teammates made an impact on Stanford freshman Kiki Iriafen during pregame warmups. By the time Iriafen entered the game, the Cardinal was in complete control.

Jones recorded her fifth double-double of the season with 12 points and 10 rebounds and No. 2 Stanford beat Arizona State 78-50 Friday night.

Fran Belibi added 12 points and Cameron Brink had 11 for the Cardinal (15-2, 6-0 Pac-12), who won their seventh straight since losing at No. 1 South Carolina. Iiriafen scored 12 points in 10 minutes during the fourth quarter, shooting 5 for 6 from the field.

Kiki’s fourth quarter was awesome,” Stanford coach Tara VanDerveer said. “She helped the team and she helped herself.”

“Even in warmups there was a lot of energy,” she said. “That gave me a lot of confidence. Every minute counts.”

Jade Loville led Arizona State with 19 points, reaching 1,000 points for her career with a short jumper early in the second quarter. She scored her first 775 points at Boise State.

“She can hit shots even when teams are playing defense against her,” Sun Devils’ coach Charli Turner Thorne said. “She’s still learning and will be that much better.”

Loville has scored at least 19 points in each of her last seven games.

The Sun Devils avoided their lowest point total of the season with a strong effort in the fourth quarter.

Arizona State, which won seven of its previous nine games, went nearly seven minutes without scoring in the first quarter. Loville hit a jumper with 45 seconds left to end the dry spell.

Meanwhile, Stanford used the time to score 12 straight points and build a 15-2 lead on the way to a 36-17 advantage into halftime.

“We had to work hard,” VanDerveer said. “People came off the bench and contributed.”

Arizona State: The Sun Devils played on the road for the first time since winning at San Diego on Dec. 18. Their first six conference games (four on the road) were postponed due to COVID-19 protocols. They’ve had seven games total postponed, including Sunday’s game at California. ASU played its fourth game in 37 days after playing 12 in the first 42 days of the season.

Stanford: The Cardinal have won their past 21 games against Pac-12 teams and have not allowed more than 77 points in a game since the end of the 2019-20 season. … Stanford is 19-0 when Haley Jones records double figures in rebounds.

Arizona State made its final shot of the first half, a layup by Imogen Greenslade, and that was a highlight. The Sun Devils scored a season-low 17 points in the half and matched their season-low with four points in the first quarter. Loville was 45% shooting in the half while the rest of the team shot 18%. ASU missed all eight 3-point attempts and its first five free throws.

“We’re not running the offense,” Turner Thorne said. “Once we started Pac-12 we’ve gotten away from the system. We have to get our rhythm back.”

Critical inflation report could be the key to the week ahead, as the Fed meets

Trafficking in girls in Germany: Father sells daughter (16) to clan for 85,000 euros