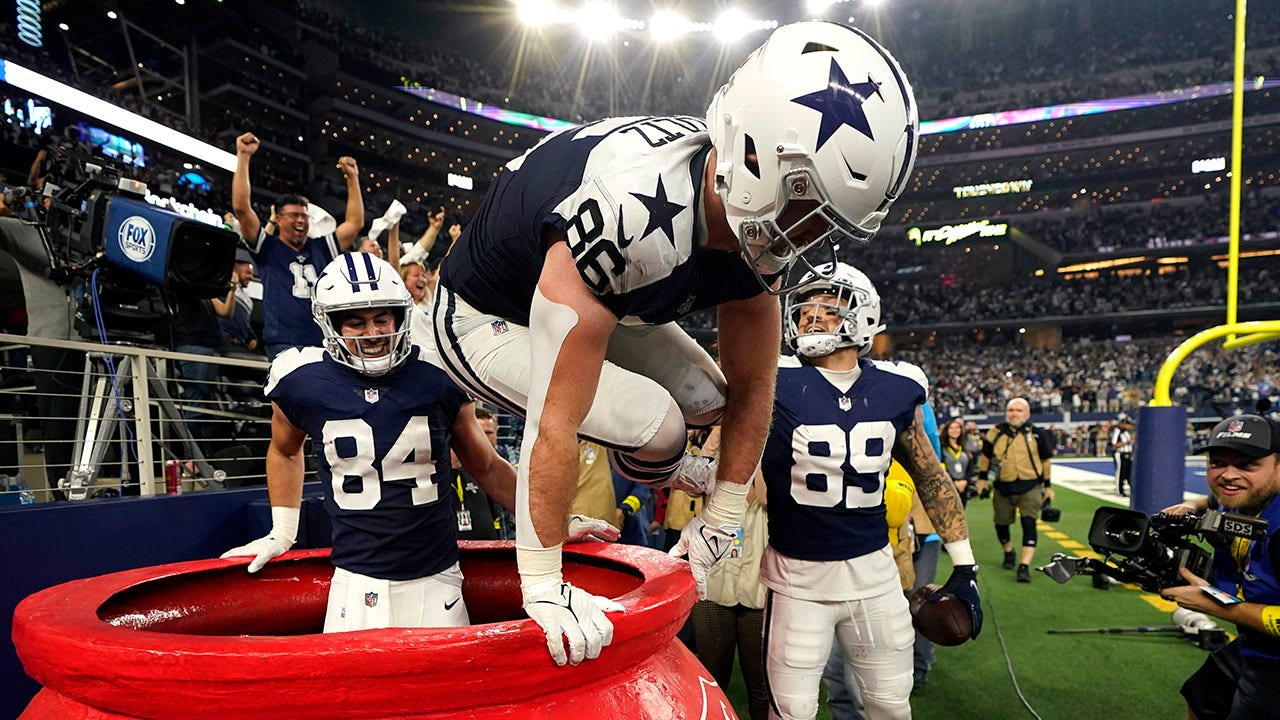 A Thanksgiving Day touchdown celebration is proving to be a costly one for the Dallas Cowboys’ tight ends.

Dalton Schultz, Jake Ferguson, Peyton Hendershot and Sean McKeon have each been fined for unsportsmanlike conduct by the NFL after jumping into the Salvation Army kettle at AT&T Stadium on Thanksgiving Day to celebrate Hendershot’s touchdown, the NFL Network reported Saturday.

Peyton Hendershot #89 of the Dallas Cowboys celebrates with teammates after scoring a touchdown against the New York Giants on Nov. 24, 2022, in Arlington, Texas. The Cowboys defeated the Giants, 28-20.
(Wesley Hitt/Getty Images)

Hendershot, who was fined $3,944, scored a 2-yard run touchdown halfway through the fourth quarter to give the Cowboys a 28-13 lead over the New York Giants.

Dallas Cowboys’ Dalton Schultz (86) jumps out of a Salvation Army kettle while celebrating Peyton Hendershot’s (89) touchdown along with Sean McKeon (84) during the second half against the New York Giants, Nov. 24, 2022, in Arlington, Texas.
(AP Photo/Tony Gutierrez)

“The Whac-a-Mole was great, the guys told me about it earlier in the week, they were worried about getting fined or getting a penalty,” quarterback Dak Prescott said of the celebration via NBC DFW. “We said, ‘Make sure you’re up two touchdowns, and we got a couple of guys who can help with the fine, so go for it.’”

Star running back Ezekiel Elliott, who was previously fined for a similar touchdown display, brought the kettle celebration back again in Sunday’s victory over the Indianapolis Colts.

Ezekiel Elliott #21 celebrates a touchdown with Dak Prescott of the Dallas Cowboys in the fourth quarter against the Indianapolis Colts on Dec. 4, 2022.
(Wesley Hitt/Getty Images)

While the league may not be a fan, the Salvation Army certainly appreciates the publicity.