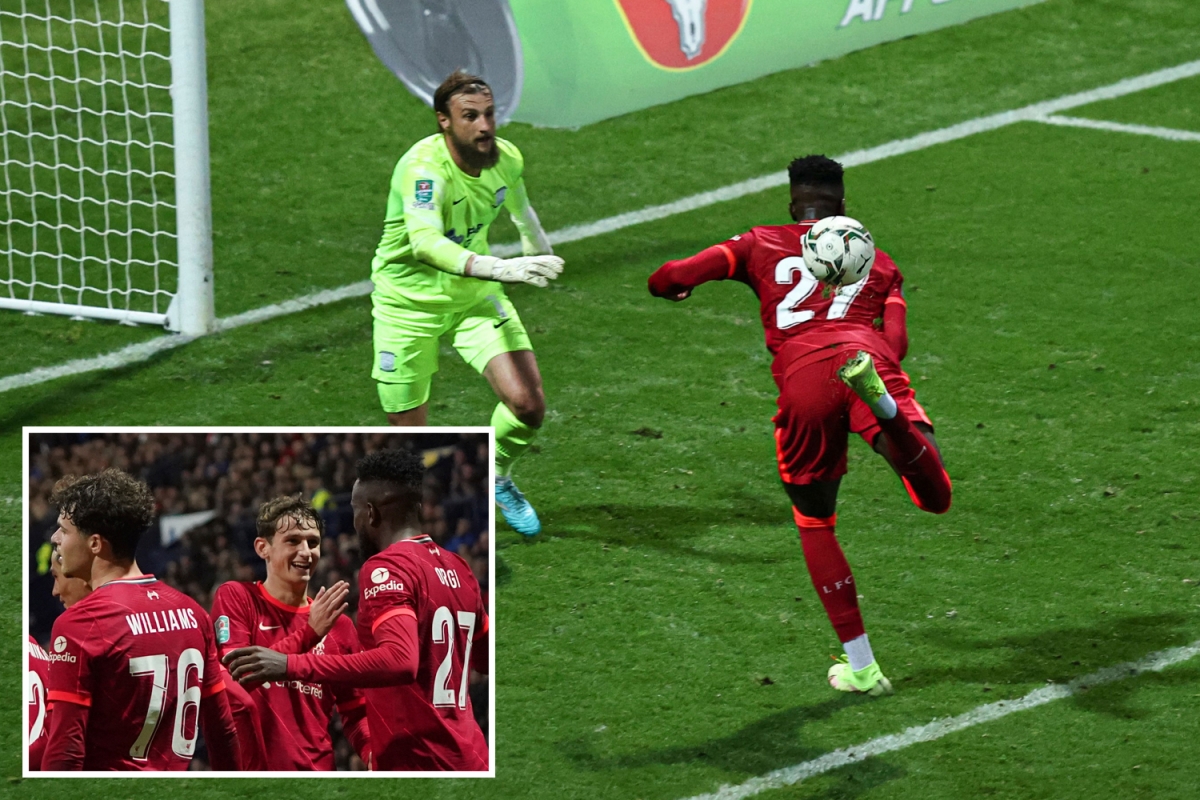 With a moment of supreme skill as he flicked the ball back over his head and in, he finished this tie and booked Liverpool’s place in the quarter-finals.

Improvisation at its best from Divock Origi to double #LFC‘s lead! 👌

Origi’s 11th goal in 15 League Cup appearances came in the 84th minute at Deepdale after Takumi Minamino had finally given the visitors the lead on the hour against their Championship opposition.

The Japanese striker likes a swig of Carabao Cup action too. He got a couple against Lincoln last season, another two in the last round against Norwich and was on target again here.

So even without Roberto Firmino, Mo Salah and Sadio Mane the Liverpool goalscoring machine goes on.

That’s 43 now in 14 matches in all competitions, with 32 of them coming in their nine away games.

Liverpool fans filled the away end still giddy from their trip to Old Trafford had still more to celebrate.

There were 5,611 of them here fittingly filling one end of the ground.

They did not take long to start chanting ‘Ole’s at the wheel’ which they had mocked the Manchester United boss with on Sunday.

Manager Jurgen Klopp changed his full eleven from that team, but having played a second string at Norwich in the previous round and still won they were expecting big things again.

Preston changed nine, mind you their fans would have been happy to see all 11 go after their woeful performance in losing their big one away to Blackpool at the weekend.

They have now won one of their last nine in the Championship to sit 19th.

But the ground was full and the second string did not let their fans down and should have been ahead by the break wasting golden chances.

Manager Frankie McAvoy set his side up to sit back, nip the ball and be decisive on the break and it was working they just couldn’t finish.

Brad Potts will wake up wondering why his name was not in the headlines given the chances he had.

It was the 24th minute and Sean Maguire, who grew a Liverpool fan, put through a lovely weight pass and Potts was away.

Perhaps the enormity of the moment got to him as he bore down on goal. With just Adrian to beat he scooped his shot in the air rather than tuck it low into a corner and the Liverpool goalkeeper saved.

A chance for redemption came four minutes later.. and went.

Ali McCann on the right found Maguire and his point blank shot was saved.

Ryan Ledson followed up and beat the ‘keeper but Neco Williams somehow blocked it on the line.

The ball broke free to Potts but he blazed it over the bar.

You sensed they would pay for it and they did.

Just past the hour good work by Neco Williams saw him pull the ball back for Minamino to turn the ball home from the edge of the six yard box.

His movement was brilliant as he snuck across the front of his closest marker and stuck out a boot.

Williams pushed forward from his full back position to cause chaos again for the second.

Kostas Tsimikas floated over a cross that hit the bar.

Williams picked it up shuffled one way then the other got off a shot which was blocked and flipped behind Origi.

What a moment of skill it was as he flicked a boot back and hooked a shot back over his head and in.