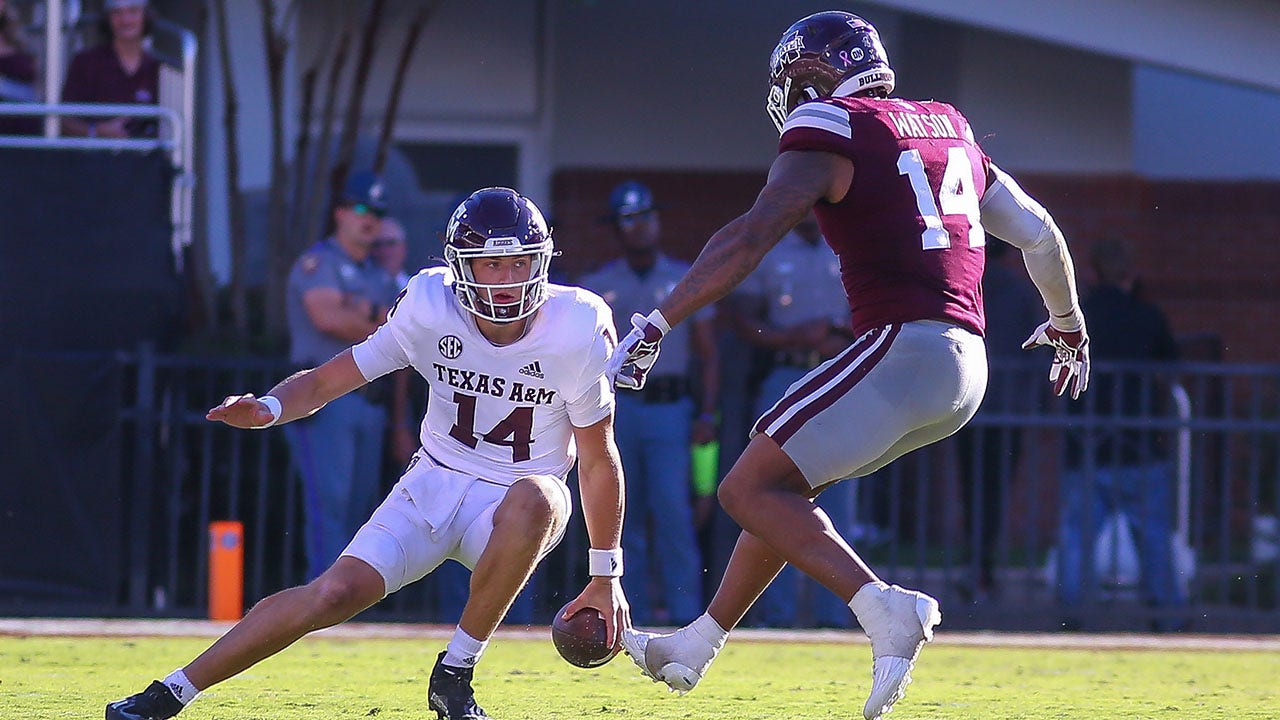 Texas A&M and Alabama will enter Saturday’s game with major question marks at the quarterback position.

Aggies quarterback Max Johnson, who took over for Haynes King in Week 3, has a broken bone in his throwing hand and could miss the rest of the season, according to ESPN Radio.

Texas A and M Aggies quarterback Haynes King (13) rolls out during a game against the Mississippi State Bulldogs Oct. 1, 2022, at Davis Wade Stadium in Starkville, Miss.
(Chris McDill/Icon Sportswire via Getty Images)

The injury occurred during Texas A&M’s loss to Mississippi State in Week 5, and Johnson was replaced by King in the fourth quarter.

Johnson was 19-for-26 for 203 yards and a touchdown before exiting the game. King was 6 of 13 with two interceptions in the fourth quarter, though he did find his way into the end zone on the ground.

On Monday, Aggies head coach Jimbo Fisher praised King for his play when called on to fill in for Johnson.

“Haynes came and led us straight down, made a great drive” Fisher said, according to 247 Sports. “His decision-making was good. Unfortunately, he had a couple of breaks where the ball tipped the wrong way, but he was doing the right thing. He came in and led well and took us to two touchdown drives, as a matter of fact.”

Fisher said King and freshman quarterback Connor Weigman will both be ready to play Saturday.

Texas A and M Aggies quarterback Max Johnson (14) cuts back during a game against the Mississippi State Bulldogs Oct. 1, 2022, at Davis Wade Stadium in Starkville, Miss.
(Chris McDill/Icon Sportswire via Getty Images)

“We give him reps every week with the twos,” Fisher said when discussing Weigman. “He’s knowledgeable, sits right by me on the plane when we travel. He can do things in the meetings and is really progressing. He understands everything, what we’re doing and how we’re doing it and is getting better and better. I think he is going to be a very good player.

“We feel comfortable with him in the game and can play very well with Conner.”

Bryce Young (9) of the Alabama Crimson Tide celebrates on the sidelines after his team scored a touchdown during a game against the Arkansas Razorbacks at Donald W. Reynolds Razorback Stadium Oct. 1, 2022, in Fayetteville, Ark. The Crimson Tide defeated the Razorbacks 49-26.
(Wesley Hitt/Getty Images)

For Alabama, reigning Heisman Trophy winner Bryce Young will be a game-time decision after injuring his shoulder against Arkansas in Week 5.

“Bryce has been practicing, and all week he’s been saying that he could play,” Saban told ESPN Thursday. “But that’s going to be a medical decision. We’ve still got some time, and I want to talk more to Bryce. He’s the only one who knows how he feels because it’s going to be a pain tolerance thing.

“He’s a tough kid and great competitor. We’ll see where he is on game day.”

‘RHONY’: Luann de Lesseps Says Bethenny Frankel Blocked Her for Years – ‘Now She Gets to Talk About me? Not Cool’

‘RHONY’: Luann de Lesseps Says Bethenny Frankel Blocked Her for Years – ‘Now She Gets to Talk About me? Not Cool’