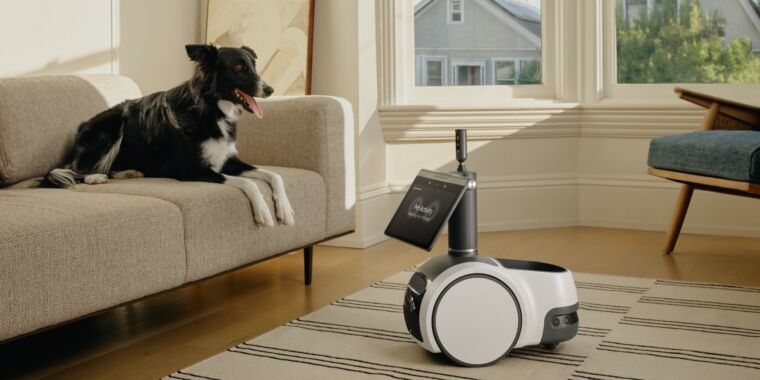 Amazon’s press-only hardware event today included reveals of the Kindle Scribe, Eero extending mesh networks with Echo, updated Echo Dot and Studio speakers, plus an Echo dashboard accessory. Like last year, there was also talk of the Amazon Astro robot that can roll around homes equipped with a digital smile, camera, and microphones. This time, Amazon detailed new and planned features for Astro; however, a year after its initial announcement, Astro remains an invite-only experimental product.

Astro is a 17.3×9.8-inch robot, with Alexa, a smart display, microphones, speakers, night-vision LEDs, a periscope camera, cupholder, and visual simultaneous location and mapping (V-SLAM) for navigating around people’s homes and unexpected obstacles, like a dropped item. You need to request an invite to pay $1,000 for the bot. An Amazon rep told Ars Technica that invites are currently sent out at “fairly regular intervals.”

Amazon appears to be accepting invite requests while developing new features ahead of expected mass availability, whenever that may be. Amazon’s event today didn’t provide any updates to Astro seeing general availability. When Ars Technica asked Amazon about when general availability would happen, an Amazon rep wouldn’t get more specific than “as quickly as possible.”

The new pet-detection feature sounds like it could make being away from a beloved slightly animal easier. Astro can purportedly send you a short video of your pet if it encounters it while patrolling your home. The feature also allows you to appear on Astro’s display, in case your pet misses you as much as you miss it or needs a familiar voice.

Amazon also announced the ability to train Astro to learn about windows or doors in your home, so it can alert you via image and text if they’re open or closed when they shouldn’t be. If something’s amiss, Astro can alert you, including if you’re not home, by sending you an image and text. You can also ask Astro to check a certain window or door that you taught it about.

The feature works by dual-modality AI, including Astro looking at the object and you describing the object to Astro. Astro gives you the option to tell it if it got things wrong, so it can improve.

The next step is greater object identification, starting with furniture and pet food bowls, Ken Washington, VP of Amazon Devices and Services, said.

But while many consumers can still not buy and try Astro, Amazon will continue experimenting with the robot in a new market: small and medium-sized businesses (SMBs).

Amazon hopes Astro appeals to SMBs’ physical security concerns and minimal budgets. Amazon pointed to Astro working with Amazon’s Ring security cameras. If the Ring uses the Virtual Security Guard feature—which also seems to have limited availability, based on its website—Astro will roll over to the location of an intrusion. Then, it can communicate to “professional monitoring agents,” per Washington’s blog, via video and two-way voice communication.

Amazon said it would test the feature with a small group of business customers “in the coming months.” However, if successful, we could see this feature being appealing to the most cautious residential customers, too.

Once launched, Astro has the potential to be one of the most easily available consumer robots, backed by a tech giant and an ecosystem of compatible products. But based on reviews of Astro this year, there’s plenty of work to be done before anticipating such a successful product launch.

TechCrunch in May, for example, noted a lack of committed direction from Amazon for the product and struggled to find a need for the pricey technology. CNET agreed Astro lacked “a compelling use case” as it stood as a Day 1 Edition experimental product (as of writing, Astro is still considered a Day 1 Edition product). And with reliance on Amazon services, like Alexa and Ring’s Protection Pro subscription, The Verge reduced the home robot to an “Echo Show on wheels.”

So, it makes sense that Amazon is still working on tweaking the robot so that it can not only appear as useful as possible but as necessary as possible, considering its steep price tag and limited precedent for robots like this, particularly in homes. After all, it’s not just about Astro; Amazon hopes to build more than one consumer home robot, Washington told GeekWire in June.

It is also not surprising for Astro’s strategy to move forward with stronger consideration for businesses, as many emerging technologies, such as mixed reality devices and smart glasses, have done to maintain relevancy.

To encourage development of even more Astro abilities, Amazon is sharing the software development kit it used to build the aforementioned pet detection feature with three schools known for robotics development, Georgia Institute of Technology, University of Maryland, and University of Michigan.

For the time being, it seems that the next news about Astro will be around further software development rather than a full public release. And for a robot expected to be $1,500 when it sees general availability, that’s probably for the best.

Ars Technica may earn compensation for sales from links on this post through affiliate programs.

Editor’s note: This article was updated to include information about availability from Amazon and clarify the pet-detection feature’s abilities.