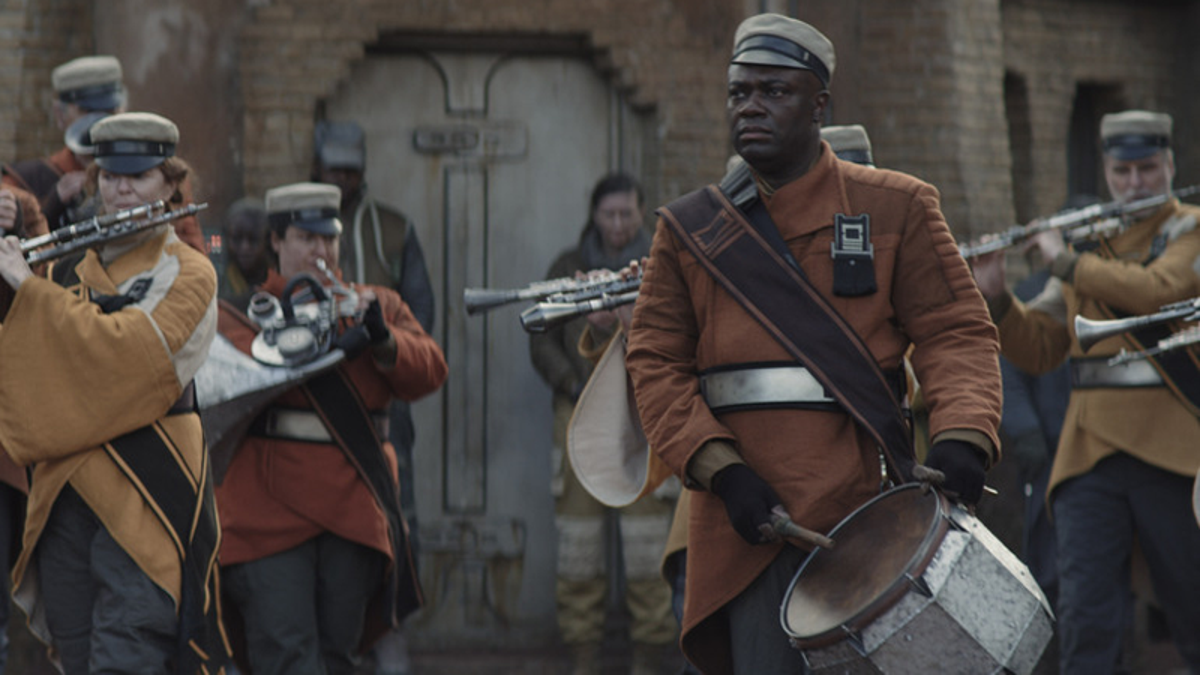 Andor is the rare Star Wars property where the Jedi and the Force are wholly absent, literally and metaphysically. Even its chronological predecessor Rogue One was deeply enmeshed in the idea of the Force as a connective, religious entity. And yet, with nary a telekinetic wave or the snap-hiss of a laser sword, its finale episode proved to be one of Star Wars’ most spiritual stories yet.

It’s not that Star Wars hasn’t alluded to this kind of religiosity beyond the construct of the Jedi and Sith’s binaries, or the dogma underlying the Jedi Order’s profound institutional failures. Admiral Holdo’s invocation of the Force in The Last Jedi was rendered by Laura Dern as a nod to the character being in some way Force-sensitive herself, but explicitly not a Jedi. As mentioned earlier, Rogue One had a deep connection to the religious nature of the Force largely removed from the Jedi explicitly, complete with a noted Holy City filled with practitioners of multiple Force faiths, the destruction of which becomes the rallying cry of the Rebel Alliance’s first major victory against the Empire.

But Andor asks us to consider what spirituality in the galaxy far, far away can look like beyond the idea of the Force itself—or if not beyond it, interpreting the Force in a language it is usually not considered in, and through the lens of material connections rather than metaphysical ones. This is no clearer than in “Rix Road,” the stirring final episode of Andor’s first season. Largely focusing on the funeral rites entreated to as beloved a figure on the world as Maarva Carassi Andor in the wake of her passing, the episode is a story of community spirit and unity in the wake of authoritarian diktat, the story of not Empire versus Rebellion at least in the organizational sense, but what happens when Imperial might attempts to extinguish belief systems the same way it attempted to purge the Jedi from the galaxy’s collective consciousness.

In ways big and small, throughout Andor we are given a window into the quasi-spiritual rituals of society on Ferrix in the lead up to “Rix Road.” There’s the Time Grappler, the hammer-wielding chronologist who wakes and enslumbers the people of Ferrix to herald the coming and passing of the day, who likewise returns to play a key part in Maarva’s procession. The way Maarva’s body is treated after her passing comes with the sort of revered spectacle one might lend a religious figure, her connection to the Daughters of Ferrix—derided by the Imperial interlopers on the planet as a social club, but almost more akin to a religious group given their connection to the funeral traditions of the planet—as they solemnly prepare her body for the coming rites. And then there are those rites themselves: the act of cremating a physical body and mixing its ash into the forging of a funerary stone, a brick among many put to use to build Ferrix’s civilization, its stores and its houses and its very ways of life, a way in which a departed person returns to the Earth but in a decidedly more materialistic manner. They are of Ferrix in life, and they are of Ferrix in death.

But in the march itself in “Rix Road”—heralded by both the Time Grappler’s methodical hammer-beats, and the ethereal music of a marching band that collectively rallies mourners to the titular road, home of the Empire’s established base on the world in an overtaken hotel—we see what these spiritual practices mean and do for the populace of Ferrix the departed leave behind. The band’s music is almost like a siren song for onlookers, pulling them in to follow its path as they snake through Ferrix’s streets. When its mournful, slow tone changes to a fluttering note progression to denote the end of the gathering and the start of the actual procession—culminating in the chanting of “Stone and Sky” by the crowds—the almost discordant nature of the piece’s beginning fades to give a sense of peaceful clarity, voices and instruments unified not just in song, but spirit.

It’s this spirit that is vital to the religious heartbeat of Ferrix, not in the way the biological nature of the Force is often presented as in Star Wars—it’s akin to it in a way, and Andor paints clear parallels, but it’s also removed entirely from the Force theologically. The people of Ferrix are not tied together either metaphysically or through literal invocation of the Force; their spirituality is rooted in the physical world, in traditions and rites, things that bind them in ways the Empire can neither understand (look at their bafflement when the funeral music begins, and one of the commanders’ frustrated sighs that he “can hear it, but I can’t see it”) nor successfully destroy by force or oppression.

Physical bodies are not important to their death rites in the way that Force users’ spirits leave theirs behind, but something physical remains in the funerary stone made from their ashes. Spirit is enmeshed with song, a tune so imprinted upon the hearts of Ferrixians that attempting to hum along with it is the only thing that Bix can do to root herself in the moment after being so utterly broken by the ISB’s torture. And yes, the dead speak: not as literal ghosts, but through holograms, through a sense of collective memory (as we see when Cassian’s thoughts flash back to his adoptive father Clem when he brushes his funerary stone earlier in the episode), and they fulfill a very similar kind of importance in Ferrixian theology. If the real power of the Force is that it is a spirit that binds all things—not just the natural world and the sentient beings that inhabit it, but in connections that stretch across generations upon generations of Force users—in order to pass on lessons and beliefs, then a similar power is at the heart of Ferrix’s rituals.

“I was six, I think, first time I touched a funerary stone—heard our music, felt our history, holding my sisters hand as we walked all the way from Fountain Square. Where you stand now, I’ve been more times than I can remember,” Maarva’s recording tells the gathered crowd, after she makes a comment that it almost feels like she can already see them around her, despite her speech being played posthumously. As she continues, she makes it clear that these rites are fundamental to life on Ferrix, that they are important acts to unite and uplift its peoples, to allow them to endure and persevere: “I always wanted to be lifted. I was always eager, always waiting to be inspired. I remember every time it happened, every time the dead lifted me with their truth. And now I’m dead, and I yearn to lift you—not because I want to shine, or even be remembered. It’s because I want you to go on.”

There is a sense of a higher power at play throughout Andor, and most keenly in this finale episode, but by layering it in the context of human connection and emotion, by placing its religious lens into a materialistic form of spirituality, the show gives something Star Wars desperately needs if it is ever to grow beyond the yoke of the Jedi and Sith’s eternal conflict, while still echoing its shades of Light and Dark: a sense of faith in people and community, not because of some shared magical energy, but in traditions and lessons. It’s a spirituality that is just as powerful as the Force can be even if it’s not going to get people lifting rocks and throwing lightsabers around. But it is a powerful ally indeed, nonetheless.