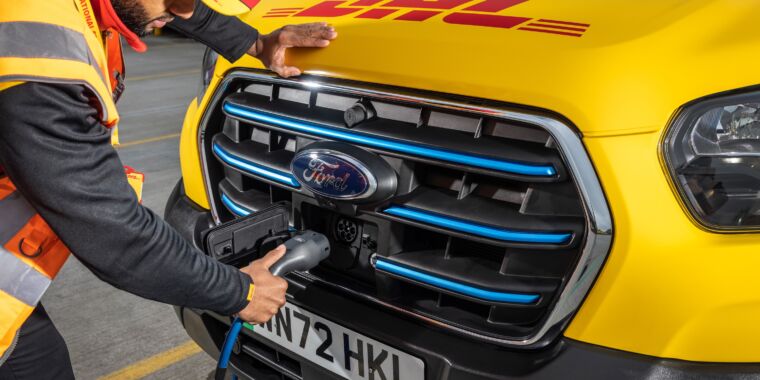 On Monday, the Ford Motor Company and courier company DHL announced a new deal to supply the latter with 2,000 electric cargo vans by the end of 2023. The Ford E-Transits will be used in both Europe and the Americas for last mile deliveries as DHL works on becoming carbon neutral over the coming years.

These 2,000 new E-Transits won’t be DHL’s first EVs, as in 2021 before the launch of the E-Transit, DHL added at least 98 electric Transit 350 HD vans converted from diesel power to electric powertrains by Lightning Motors.

But Lightning’s conversions are of the larger class 3-size van; Ford’s factory-built E-Transit is in the smaller class 2 category, and comes with the advantage of the Ford Pro telematics system that gives fleet managers highly granular information about how their assets are being used.

In fact, DHL has already taken delivery of some E-Transits as part of this deal, with electric vans seeing last-mile service so far in Bulgaria, Belgium, the Czech Republic, Germany, Luxembourg, Mexico, the Netherlands, and the United Kingdom.

Electric delivery vans should become a lot more common on our roads over the coming year. As the rest of DHL’s new fleet of E-Transits hits the road in 2023 they’ll join Amazon’s Rivian vans, more than 1,000 of which are already on the road in the US. And we can’t forget BrightDrop’s Zero 600 either, being bought in large numbers by both Fedex and WalMart. Things aren’t looking quite so rosy over at UPS, however. In 2020 it signed an order for 10,000 EV vans from British company Arrival, but in November the startup’s share price cratered after it announced it might not have enough funds to survive the coming year.