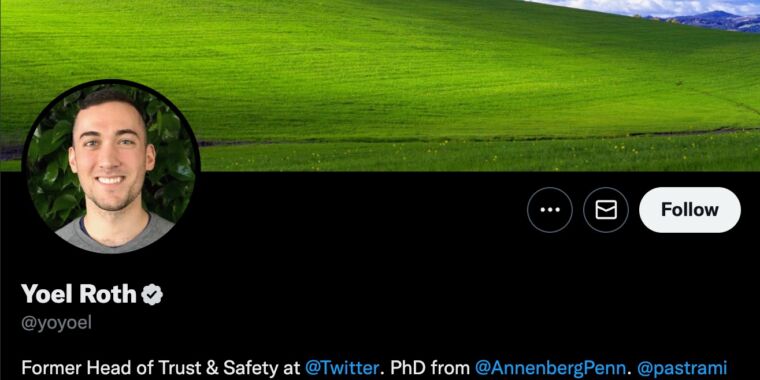 During Elon Musk’s first two weeks as the owner of Twitter, he seemed to have an ally in Yoel Roth, who had been the social network’s head of trust and safety for seven years. Roth defended some of Musk’s early actions and touted Twitter’s work to crack down on hateful conduct. Musk pointed his followers to Roth’s tweets explaining Twitter’s content moderation work and said Roth has “high integrity”—even though they disagreed on whether former President Trump should have been suspended.

“I recommend following @yoyoel for the most accurate understanding of what’s happening with trust & safety at Twitter,” Musk wrote on October 31.

But Roth quit on November 10, a day after Musk rolled out the $8-per-month Twitter Blue subscription that came with verification checkmarks. Musk had ignored prescient warnings from Roth’s team and was forced to backtrack from paid verification after scammers eagerly paid $8 for checkmarks that made it easy to impersonate prominent accounts. Musk’s revamped Twitter Blue was set for a relaunch this week but was delayed again.

Roth recalled how the paid-checkmark mess led to his resignation in an interview yesterday with Kara Swisher at a Knight Foundation conference. “It was not an easy decision,” Roth said, continuing:

I was weighing the pros and cons on an ongoing basis. I knew what my limits were and by the time I chose to leave, I realized that even if I spent all day every day trying to avert whatever the next disaster was there were going to be the ones that got through. And Blue verification got through over written advice prepared by my team and others at Twitter. We knew what was going to happen. It’s not that it was a surprise. It failed in exactly the ways we said it would.

The above quote and other portions of the interview can be seen on YouTube. For parts we haven’t been able to view, we’re relying on news stories about the Roth/Swisher interview.

“Before Musk took over Twitter, Roth wrote down several commitments to himself that would trigger the decision to quit. One limit, he said—one that was never reached—was that Roth would refuse to lie for Musk,” a CNN article said.

But another one of Roth’s limits was reached. “One of my limits was if Twitter starts being ruled by dictatorial edict rather than by policy… there’s no longer a need for me in my role, doing what I do,” he said, according to Reuters.

That echoes Roth’s statement in a New York Times op-ed on November 18. Roth wrote that “many of the changes made by Mr. Musk and his team have been sudden and alarming for employees and users alike, including rapid-fire layoffs and an ill-fated foray into reinventing Twitter’s verification system.”

Noting Musk’s “impulsive changes and tweet-length pronouncements about Twitter’s rules,” Roth wrote that “Musk has made clear that at the end of the day, he’ll be the one calling the shots. It was for this reason that I chose to leave the company: A Twitter whose policies are defined by edict has little need for a trust and safety function dedicated to its principled development.”