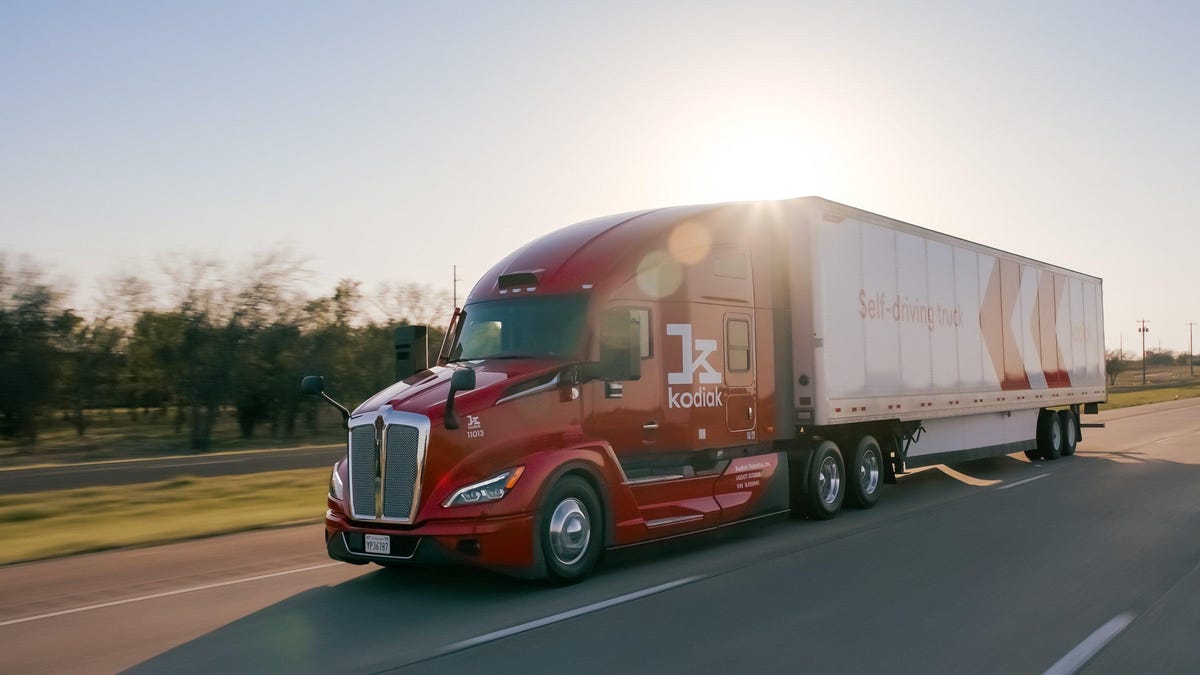 The U.S. military’s long, often winding road to rolling out autonomous vehicles has, to this point, mostly disappointed energetic technologists eager to see human drivers eliminated from combat scenarios. Though the Pentagon’s largest research agency has spent the better part of two decades fiddling with autonomous tech, now the Department of Defense is turning to a California-based startup company to fast track its use of autonomous vehicles for “high-risk” missions.

This week, autonomous trucking startup Kodiak Robotics revealed it won a two-year, $49.9 million military contract from the Department of Defense to help create and deploy future autonomous ground vehicles capable of carrying out reconnaissance and surveillance. In theory, those vehicles should be capable of traversing complex terrains in diverse conditions where GPS availability might be limited. That’s quite a tall task for a firm who, before today, was best known for self-driving semis hauling Ikea furniture.

If successful, Kodiak believes its new autonomous reconnaissance vehicles could reduce risks to soldiers who otherwise would put themselves in danger operating behind enemy lines. The exact design and appearance of those vehicles, to this point, remains unclear. Outside of the sneakier use cases, Kodiak says its autonomous tech could serve as a “technical pipeline” to enable rapid deployment of autonomous tech within the military.

“I started Kodiak because I believe autonomous technology can save lives, and helping the U.S. Army develop driverless vehicles for the most challenging operating environments fits perfectly with that goal,” Kodiak Robotics founder and CEO Don Burnette said in a statement.

Kodiak ultimately beat out 33 other competitors as part of a competition hosted by the DoD’s Defense Innovation Unit on behalf of the Army’s Robotic Combat Vehicle program. Though driverless vehicles on commercial roads are currently stuck in a safety and regulatory limbo preventing them from hitting public roads, the DoD says the actual tech making its way through the sector has nonetheless evolved rapidly in recent years.

“There has been a revolution in the techniques and capabilities of un-crewed ground vehicles occurring in the private sector over the past two decades,” Kevin O’Brien, the Defense Innovation Unit’ Technical Director for Autonomy said in a statement. “We’re eager to bring these matured technologies back into the Department of Defense, where initial work was inspired by the DARPA Grand Challenges.”

By DARPA challenges, O’Brien’s referring to a series of tests conducted in the sandy outskirts of the Mojave Desert 18 years ago where 15 early “autonomous vehicles” competed against each other to navigate through a 142-mile course. All of them failed, many miserably. Still, that challenge, which pulled together some of the brightest minds in autonomy technology at the time, is often credited with spearheading then-nascent autonomous vehicle tech into a budding startup culture. In fact, some of the creative forces behind many of those early sand-filled hunks of junk ended up becoming leaders in their fields.

Awarding a major contract to one of these burgeoning startups, in that sense, means the field has come full circle. Kodiak and the DIU, according to TechCrunch, are currently building test tracks that reflect the type of terrain these autonomous vehicles might see in combat scenarios. Kodiak is also reportedly building out a custom, human-driven ATV for the military intended for testing and data collection.