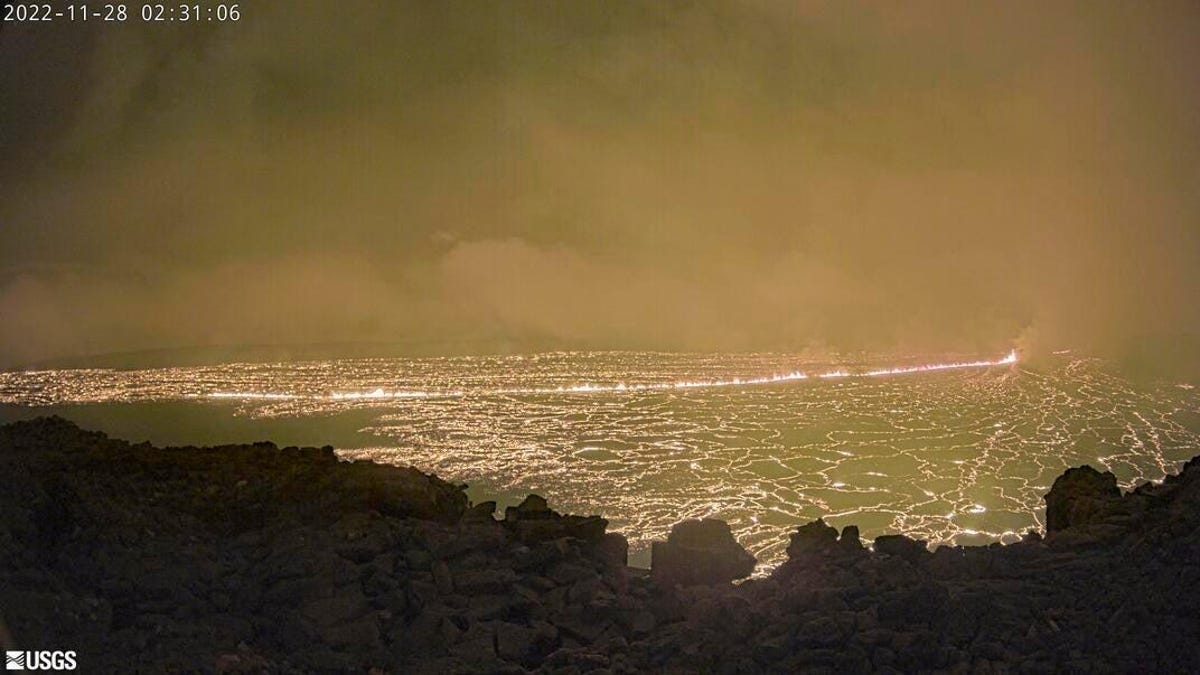 The world’s largest active volcano is erupting for the first time in almost 40 years. The Mauna Loa volcano, which is located on the Big Island in Hawaii, started erupting on Sunday night, breaking its longest quiet streak in recorded history.

The U.S. Geological Survey said in an advisory that the eruption began at 11:30 p.m. HST on Sunday in Moku‘āweoweo, the summit caldera of the volcano. The lava flows, the USGS said, were contained around the summit and were not currently posing a danger to communities down the slope of the volcano.

The National Weather Service in Honolulu issued an ash fall advisory through 6 a.m. HST (11 a.m. EST) Monday, warning that up to a quarter-inch of ash could fall on portions of the Big Island. According to Hawaii’s Emergency Management Agency, that advisory was extended early Monday morning to 10 a.m. HST (2 p.m. EST). Volcanic ash, which is made up of tiny particles of sand with particularly sharp edges, can make air quality dangerous, even for people without preexisting conditions.

“People with respiratory illnesses should remain indoors to avoid inhaling the ash particles and anyone outside should cover their mouth and nose with a mask or cloth,” the NWS warned.

The USGS also warned that there’s a chance that lava flows could “move rapidly downslope” if the eruption spreads outside the walls of the caldera into areas where the rock is cracked. Hawaii’s Emergency Management Agency said Monday morning it had received “some reports” of lava overflowing the caldera, but as of 5 a.m. HST (10 a.m. EST), USGS reported no threats to populated areas.

“Based on past events, the early stages of a Mauna Loa eruption can be very dynamic and the location and advance of lava flows can change rapidly,” the USGS said in its statement.

Mauna Loa towers over the other four major volcanoes on the Big Island: It stretches some 2.5 miles (4 kilometers) above sea level and covers about half the area of the island. The volcano last erupted in 1984, and lava flows from that eruption eventually came to within 4 miles (6.4 kilometers) of Hilo, the biggest city on the island, traveling 16 miles in just four days. The volcano has erupted 33 times since the first eruption on record in 1843. Since 1868, flows of lava rock from those eruptions have reached the ocean eight times. In 1950, the volcano experienced one of its most powerful eruptions on record, with some lava flows traveling the 15 miles (24 kilometers) between the vent and the ocean in just three hours.