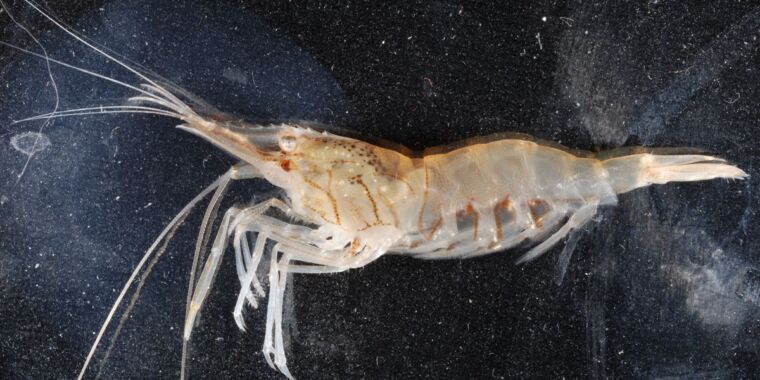 Marsh grass shrimp (Palaemonetes vulgaris) are impressively fast and nimble swimmers, as anyone who’s seen them zipping about tide pools at the beach can attest. Nils Tack, a postdoctoral researcher at Brown University, studies the biomechanics and fluid dynamics of how these little creatures manage the feat. He presented his latest findings at a recent American Physical Society meeting on fluid dynamics in Indianapolis. Essentially, the shrimp uses its flexible and closely spaced legs to reduce drag significantly. The findings will help scientists design more efficient bio-inspired robots for exploring and monitoring underwater environments.

Tack is a biologist by training, currently working in the lab of Monica Wilhelmus. Earlier this year, the group introduced RoboKrill, a small one-legged 3D-printed robot designed to mimic the leg movement of krill (Euphasia superba) so it can move smoothly in underwater environments. Granted, the robot is significantly larger than actual krill—about 10 times larger, in fact. But it’s challenging to keep and study krill in the lab. RoboKrill’s “leg” copied the structure of the krill’s swimmerets with a pair of gear-powered appendages, and Wilhelmus et al. used high-speed imaging to measure the angle of its appendages as it moved through water. Not only did RoboKrill produce similar patterns to real krill, but it could mimic the swimming dynamics of other organisms by adjusting the appendages. They hope to one day use the robot to monitor krill swarms in the wild.

Regarding the marsh grass shrimp’s swimming style, prior studies showed that the creatures could maximize forward thrust thanks to the stiffness and increased surface area of its legs. That research essentially treated the legs (aka pleopods) as paddles or flat plates pushing on water. But nobody looked closely at how the legs bent during recovery strokes. “It’s a very complex system,” said Tack during a briefing at the meeting. “We try to approach [the topic] through two angles, looking at the fluid and looking at the mechanical properties of the legs.”

Specifically, Tack and his colleagues seeded the water with microscopic particles, which enabled them to track and compute the speed and direction of flow features, used bright-field particle image velocimetry (PIV) to visualize the fluid flow around the shrimp’s beating legs. They also studied the mechanical properties of the shrimp legs—no easy feat since each leg is roughly the size of a grain of sand. “We basically pushed on the legs with a known force to see how they bend,” said Tack.

This dual approach enabled the team to identify two key drag-reducing mechanisms. First, per Tack, they noted a big difference in patterns between the power stroke that produces thrust, and the recovery stroke. “We found that the legs are about twice as flexible during the recovery stroke and bend heavily,” he said. “They stay almost horizontal relative to the direction they’re swimming.” The result is less direct interaction with the water and a reduced wake (smaller vortices), unlike the power stroke, where the leg remains very rigid to maximize interaction with the water.

Second, the grouping of the pleopods during the recovery stroke turned out to be significant as well. “Whenever they return the legs to the original position, they keep them close to one another for 100 percent of the time,” said Tack. That’s enabled by the flexibility, which creates a tight seal between the shrimp’s legs. So rather than three legs moving separately, their legs essentially move as one, significantly reducing drag. “They beat their legs six times per second, for hours at a time, so that’s potentially a lot of energy they do not waste,” said Tack. He and his colleagues will be adapting their grass shrimp-inspired robot design accordingly.