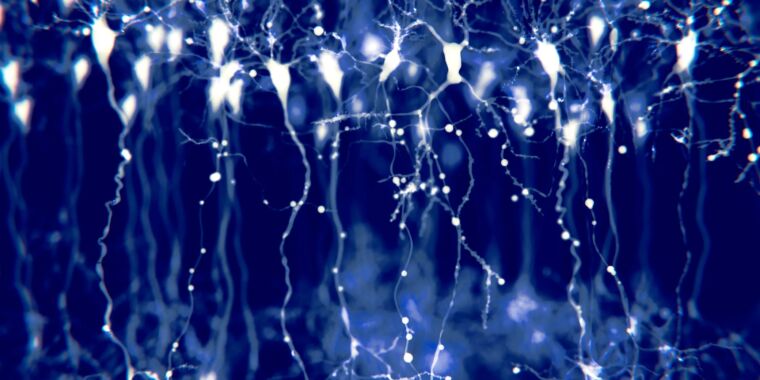 There’s a video that’s shown in almost every introductory neuroscience course. It doesn’t look like much—a bar of light shifting and rotating across a black screen while the background audio pops and crackles like the sound of a faraway fireworks show. Dry stuff, until you learn that the pops represent the firing of a single neuron in the brain of a cat, who is watching the bar move on the screen. When the bar reaches a specific location and lies at a particular angle, the popping explodes in a grand finale of frantic activity. The message is clear: This neuron really, really cares about that bar.

The experiment shown in the video was performed by David Hubel and Torsten Wiesel in the 1960s and helped scientists infer basic principles about how the visual system works. For decades since, neuroscientists have stuck thin, metal electrodes into the brains of mice, finches, and monkeys to spy on individual neurons and figure out what sets them off. There are neurons that respond to specific colors or shapes; or to particular locations in space or the direction of one’s head; or to whole faces or individual features.

As powerful an engine as single-cell analysis has proven, “Everybody always wanted more neurons,” says Anne Churchland, professor of neurobiology at the University of California, Los Angeles. Part of the reason was simple statistics: More observations are always better, no matter the experiment. But scientists also ran up against analytical walls when they looked at neurons one-by-one. In the prefrontal cortex, the region at the front of the brain that plays major roles in planning, decision-making, and social behavior, neurons respond to such a diversity of things—visual features, tasks, decisions—that researchers have been unable to assign them any particular role, at least individually. Even in the primary visual cortex, the area far to the back of the brain where Hubel and Wiesel made their recordings, only a fraction of neurons actually fire when the animal looks at oriented bars.

With Hubel and Wiesel’s techniques, looking at more than a handful of neurons at once was impossible. But engineers have pushed and pushed that capacity, culminating in the development of Neuropixels probes in 2017. One centimeter long and made of silicon, a single probe can listen to hundreds of neurons at once and is small enough that neuroscientists can stick several of them into an animal’s brain. At the Allen Institute, a nonprofit research institute started by Microsoft cofounder Paul Allen, they used six Neuropixels probes to record simultaneously from eight different regions of the mouse visual system. In August, the institute released data from 81 mice—comprising the activity of around 300,000 neurons. The data is freely available to any researchers who might want to use it.

As the largest data set of this kind ever collected—three times as big as the previous record holder—the release lets researchers observe enormous groups of neurons acting in concert. That unprecedented scale may unlock opportunities to understand parts of cognition that have previously evaded the scientific community’s grasp. “We want to understand how we think and see and make decisions,” says Shawn Olsen, an investigator at the Allen Institute who played a central role in the project. “And it just does not happen at the level of single neurons.”

The challenge now is figuring out just how to parse all that data. Gargantuan data sets aren’t easy to handle; even sharing and downloading them can be difficult. But as tricky as the analysis may prove, working with such data sets is eminently worth it to many researchers, because it lets them study the brain on its own terms.

To Hubel and Wiesel, the brain looked like an assembly line: groups of neurons, each specialized for a specific role, dividing and conquering each task. Show someone a red balloon, and neurons sensitive to red and circles will respond independently. But that approach never really suited how the brain actually functions—it is so densely wired up that no neuron is ever acting in isolation. “The brain is not looking at one neuron at a time,” says Stefano Fusi, professor of neuroscience at Columbia University. “Neurons, they’re looking at thousands of other neurons. So we should take the same perspective.”