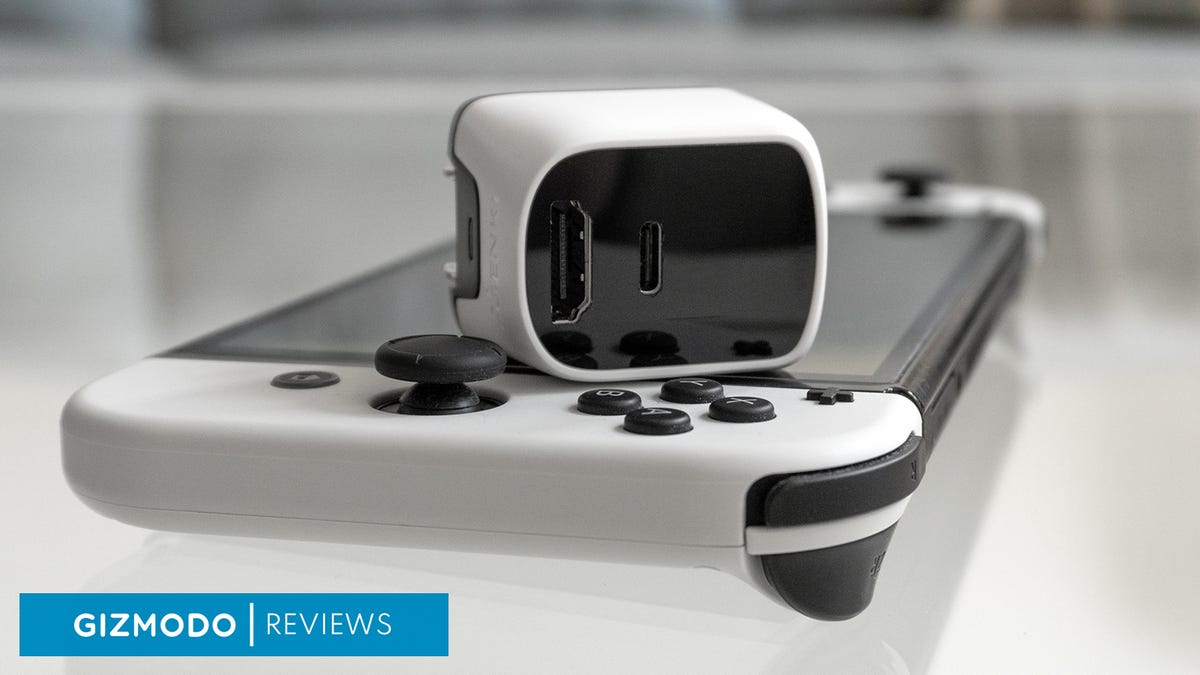 As portable as the Nintendo Switch is, its dock, used for charging the console and connecting it to a TV, isn’t. It might be convenient for home use, but it’s a pain to travel with, so anyone hoping to connect the Switch to a TV while on the road absolutely needs to add the Genki Covert Dock Mini to their kit.

Some may argue that the need to connect a Switch to a TV while traveling is unnecessary, because the console works just fine as a handheld gaming machine all on its own. That’s true, but it limits nomadic gamers to just 720P resolutions on a 7-inch screen (on the fancier OLED model). “Switch”ing the whole point of the console’s dockable design: you can easily recreate a big-screen gaming experience anywhere, and that becomes even easier if you leave Nintendo’s docking hardware at home and bring the Genki Covert Dock Mini with you instead.

A smaller version of the original Genki Covert Dock that makes a handful of compromises to improve portability.

A smaller version of the original Genki Covert Dock that makes a handful of compromises to improve portability.

A portable dock for the Nintendo Switch that can also be used to charge other USB-C devices.

Impressively smaller than the dock Nintendo bundles with the Switch, and much cheaper.

About As Small and Simple As a Switch Dock Can Get

The Genki Covert Dock Mini is actually an update to Human Things’ original Genki Covert Dock, which debuted as a crowdfunded product back in 2019. It was pitched as a much smaller alternative to the Switch’s bundled dock and beefy power adapter. When we reviewed it a year later, we were impressed with the device not only as a travel accessory, but also a cheaper way to add docks to other TVs in your home, and were happy it didn’t destroy our Switch—an issue that plagued some of the earlier Switch dock alternatives.

The new Genki Covert Dock Mini is an attempt to make the Genki Covert Dock even smaller and cheaper, albeit with a few functional sacrifices, and the results are even more impressive than the original. The Covert Dock Mini is nearly as small as the 5W chargers that Apple used to ship with iPhones, but does so much more, even including a pair of folding prongs so the adapter packs away more compactly when not in use.

The Covert Dock Mini is designed to replace the Switch’s dock/charging base as well as the bundled power adapter that plugs into a wall, but while Nintendo includes all the cables you’ll need to power and connect the Switch to a TV, Human Things only includes a USB-C cable with the Covert Dock Mini—you’ll have to provide your own HDMI cable.

Using the Covert Dock Mini is as about as easy as it gets. You plug it into an available wall outlet, connect it to the Switch with a USB-C cable, and then to a TV with an HDMI cable. The Switch does the rest, pumping out a 1080P signal to whatever HD screen it’s connected to. But because the TV connects to the wall wart and not the console, it might not be a bad idea to travel with a longer HDMI cable, just in case there are no free power outlets around your destination’s TV and you’re forced to span a larger distance.

Perfectly Portable But Not Entirely Perfect

I wish I could say the Covert Dock Mini simply shrinks all of the components inside the original Covert Dock, but that’s not the case. Human Things had to make a few trade-offs to unbiggen the new Mini version. The most unfortunate one is that the additional USB port from the original Covert Dock, which could be used to charge another device like the Switch Pro controller alongside the console, is now gone. If you travel with a wireless controller, it will either have to take turns with the Switch to charge from the Covert Dock Mini, or charge elsewhere.

The new Covert Dock Mini also only delivers 20W of power instead of the 30W provided by the original Covert Dock and the 39W delivered by the power adapter Nintendo bundles. That’s definitely not a deal breaker, as it’s enough power to keep the Switch charged while playing games at 1080P, but it could limit charging speeds and usefulness if you intend to use the Covert Dock Mini to charge other devices as well.

And as clunky as Nintendo’s dock is, it does securely hold the Switch while it’s connected to a TV. While using the Covert Dock Mini, you’re going to have to leave your Switch laying somewhere else, so it’s also a good idea to pack a longer USB-C cable so you can ensure it gets perched somewhere safe and secure. The last thing you want is to accidentally step on your Switch in the middle of the night.

I was also dismayed to find that because the power prongs extend from the middle of the Covert Dock Mini. When plugged into a power bar, it made the outlet above unusable for other devices with a grounded plug. By comparison, the position of the prongs on the Switch’s bundled power adapter resulted in it covering less of a neighboring outlet. When the Cover Dock Mini was plugged directly into a wall outlet, however, this was not an issue.

A Must-Have If You Travel With Your Switch

The Genki Covert Dock Mini hasn’t replaced the original version, and if you travel with a Switch and Nintendo’s Pro controller, you might actually be better off spending $75 on the Genki Covert Dock, which offers an extra USB port for charging accessories. If you want an extra $25 in your pocket, and are the type who prefers to travel with nothing more than a backpack in tow, the Covert Dock Mini is almost half the size of its predecessor while still letting you use your Switch for big screen gaming.