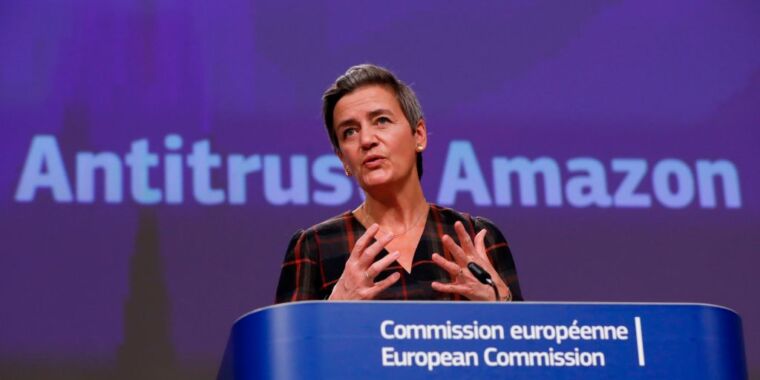 Amazon has reached a final deal with EU antitrust regulators over concerns its use of data undermined rivals, in a move that will close two of the most high-profile probes in Brussels.

The US ecommerce group has committed to increasing the visibility of rival products by giving them equal treatment on Amazon’s “buy box,” which generates the majority of purchases on the site. It will also create an alternative featured offer for those buyers where speed of delivery is less important.

The European Commission plans to announce the deal on December 20, according to four people with direct knowledge of the timing. However, they warned the date could still change at the last minute.

The commitments, which are set to remain in force for five years, have been “market tested” with rivals and agreed with EU officials, these people said. “There’s very little to discuss,” a person with knowledge of the process said.

The move represents a win for the EU, as it will serve as a blueprint for the tech group’s compliance with the new Digital Markets Act, a piece of legislation aimed at curbing the power of Big Tech.

It also means Amazon will avoid formal charges of breaking EU law and a large fine of up to 10 percent of global revenues.

The DMA is the first big overhaul of the rules governing technology groups in more than two decades. It sets out new obligations on large online platforms to give equal treatment to data, banning so-called self-preferencing whereby a company ranks its products ahead of rivals on its own marketplace.

Amazon’s deal with Brussels comes three years after EU regulators opened a probe into the group’s alleged anti-competitive practices in how it handles data from competitors.

As part of the settlement, Amazon will let sellers using its Prime membership scheme choose any logistics company and negotiate terms directly, instead of being locked into using Amazon’s logistics services.

The deal provides the first glimpse of how global tech companies will follow the EU’s new digital legislation.

Chris Meyers, Amazon’s associate general counsel, told a conference on Monday that the commitments were in line with how the group planned to comply with Brussels’ new rules.

“The specific commitment that we have proposed, and which we think also meets the obligations of the DMA, is really the approach we are going to take under the DMA,” he said.

Amazon declined to comment on Tuesday but pointed to a previous statement by the company, which said, “while we have serious concerns about the DMA unfairly targeting Amazon… we have engaged constructively with the commission.”

© 2022 The Financial Times Ltd. All rights reserved. Not to be redistributed, copied, or modified in any way.