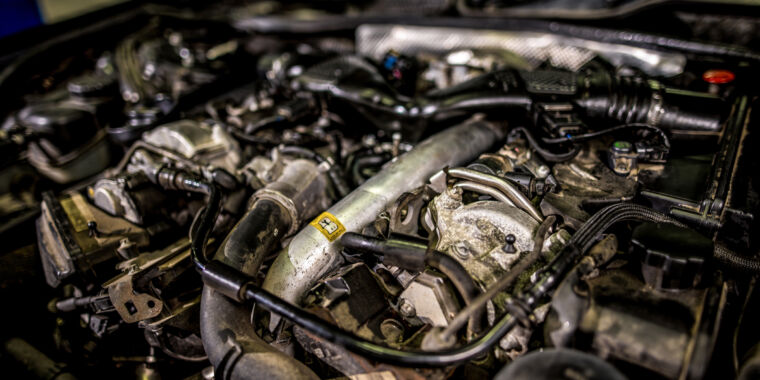 A team of engineers at the University of New South Wales (UNSW) in Sydney has figured out a way to run a diesel engine on a mix of diesel and hydrogen, dramatically lowering its emissions.

Why do we even need a diesel-hydrogen hybrid engine when there are already many great electric vehicles available? EVs are definitely great for households, but they still don’t match heavy diesel engines’ performance in some contexts, such as mining, long-distance transportation, power generation, and agriculture.

At present, there are 26,000 trains in the US that run on diesel, and there are potentially millions of trucks, generators, and other industry-grade equipment that require diesel to deliver optimum performance. It might take decades for EV technology to replace diesel engines in such industries. While it’s easy for a normal person to sell an old car and buy a new EV, such changes come at a high cost to industries.

So we’re likely to be stuck with diesel engines for a while. But what if there was a way to reduce the CO2 emissions from their existing equipment by 85 percent?

This is what UNSW’s hydrogen-diesel hybrid engine technology promises. The researchers claim that their modified diesel engine can run on 90 percent hydrogen with an improved efficiency of over 26 percent. In a press release, Shawn Kook, one of the authors of the study and professor at UNSW, said, “We have shown that we can take those existing diesel engines and convert them into cleaner engines that burn hydrogen fuel.”

He added, “This new technology significantly reduces CO2 emissions from existing diesel engines, so it could play a big part in making our carbon footprint much smaller, especially in Australia with all our mining, agriculture, and other heavy industries where diesel engines are widely used.”

A vehicle powered by diesel has a diesel-injection unit that releases fuel into the combustion chamber. The engine’s piston compresses the fuel-air mix to high pressure and temperature, which causes it to ignite. This creates the pressure that powers the engine.

During this process, a diesel engine produces carbon dioxide and NOx (nitrogen oxides), which are harmful to our environment. The researchers say that directly mixing hydrogen with diesel in the combustion chamber would increase NOx pollution. In order to overcome this problem, they developed a hydrogen-diesel dual-fuel system that uses a timed, high-pressure hydrogen direct-injection unit inside a diesel engine that was already equipped with a diesel-injection unit.

According to Kook and his team, the concentration of a gas—hydrogen, in this case—can be made to vary within different sections of the combustion chamber. These variations can affect the chemical reactions and control the amount of NOx produced by the engine. The researchers used the timing of the hydrogen injection to limit NOx production.

By using hydrogen as 90 percent of the fuel, they were able to limit the engine’s CO2 exhaust to just 90 gm per kWh. This is 86 percent less carbon dioxide than a standard diesel engine would release. Furthermore, NOx emissions were also found to be reduced significantly. “We have shown in our system that if you make it stratified—that is, in some areas there is more hydrogen and in others there is less hydrogen—then we can reduce the NOx emissions below that of a pure diesel engine,” said Kook.

Although it took the researchers 18 months to develop their first hybrid engine, they claim they can now turn any diesel engine design into a dual-fuel system within a couple of months.

Traditional methods of hydrogen production involve the oxidation of hydrocarbons that lead to CO2 emissions. However, if hydrogen is produced using renewable energy, it can be a much cleaner source of power than electricity from the grid. While there are still emissions associated with the use of diesel fuel, that’s a trade-off against the challenges of recycling lithium batteries.

The vision behind the hydrogen-diesel direct-injection engine system is to provide industries with a practical solution for their carbon emissions problem. Mining companies that employ a variety of diesel-based machines and equipment alone generate up to 7 percent of global greenhouse gas emissions. Powering the growth of such sectors with hydrogen fuel could drastically improve the health of our planet.

Kook and his colleagues have already patented their hydrogen-diesel, direct-injection dual-fuel system, and they are planning to bring it to market within the next year or two.

Rupendra Brahambhatt is an experienced journalist and filmmaker covering science and culture news for news agencies and magazines around the world.