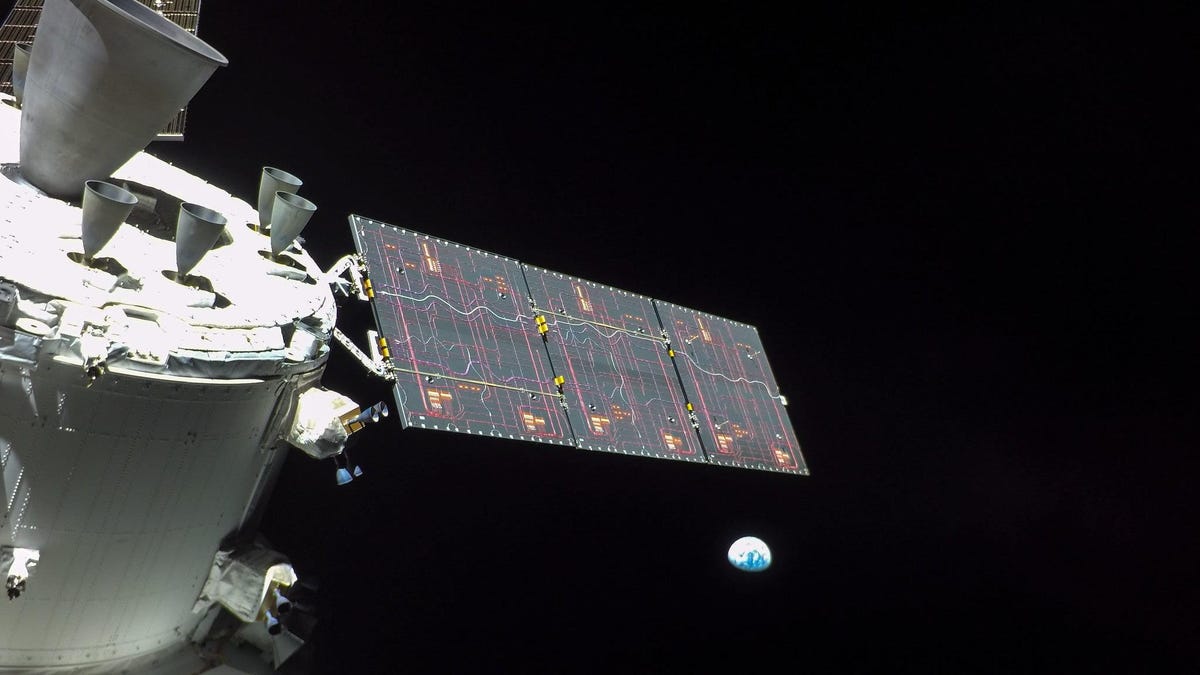 NASA’s Artemis 1 mission continues to go well, with Orion entering into its target orbit around the Moon on Friday. We’re now into the latter half of the 25.5-day demo mission, and with it comes a watershed moment for the record books.

At 4:48 p.m. ET Monday, on what is flight day 13 of the mission, Orion will reach its maximum distance from Earth, at which point it will be approximately 268,554 miles (432,194 kilometers) from home. We’ve obviously sent spacecraft much farther into space (the Voyager probes are in interstellar space, for goodness sakes!), but Orion is special in that it’s a crew-rated vehicle, meaning it’s designed to accommodate human passengers. When Orion reaches this maximum distance point later today, it’ll set a new standard for the farthest that any crew-rated vehicle has traveled from Earth—a standard that likely won’t be bested for years to come. The spacecraft had already broken the previous record, set during the Apollo missions, over the weekend, but its journey wasn’t over yet.

No human crew is aboard Orion for this mission, so, yes, it’s not the most satisfactory record. Artemis 1 is a demonstration mission, but for the follow-up Artemis 2 mission (currently scheduled for late 2024), the plan is to strap actual astronauts into Orion’s seats. Until that happens, however, the crew of Apollo 13 still holds the record as being the farthest that any humans have ever ventured—a distance of 248,655 miles (400,171 km) from Earth.

That said, Orion does have human analogues on board in the form of three mankins: Campos, Helga, and Zohar. The trio is collecting valuable data about radiation and flight accelerations and vibrations. So, for what it’s worth, these manikins are now the farthest that pretend-humans have traveled.

Orion, as an uncrewed crew-rated vehicle, smashed the 52-year-old distance record set during Apollo 13 on Saturday (November 26) at 7:42 a.m. ET. The capsule successfully entered into its target orbit—a distant retrograde orbit around the Moon—on Friday at around 5:00 p.m. ET. Ground controllers successfully executed a maintenance burn on Saturday to fine-tune the capsule’s trajectory, according to a NASA blog post.

On Sunday, mission engineers began scheduled tests of Orion’s reaction control thrusters, while also activating Callisto, a tech demo from Lockheed Martin, Amazon, and Cisco that’s meant to evaluate the feasibility of using voice activation and video teleconferencing technology in the space environment. The next major event in the Artemis 1 mission won’t happen until Thursday, December 1, when Orion will attempt its second and final flyby of the Moon and chart a course back to Earth. The capsule is scheduled to perform its atmospheric reentry and splashdown on December 11.

Related: See the Coolest Images So Far From Orion’s Historic Mission to the Moon

The Artemis 1 mission has, for the most part, been smooth sailing. Well, there was that scary incident on Wednesday, November 23, when controllers unexpectedly lost contact with Orion for 47 minutes. And early on in the mission, plumes from Orion’s thrusters were confusing the spacecraft’s star tracker, a system that uses the positions of the stars to assist with orientation and navigation. This issue has since been resolved, and the star tracker is “performing perfectly,” Jim Geffre, Orion vehicle integration manager at NASA, told reporters during a November 18 press briefing.

Artemis 1 is the first of what NASA hopes will be a series of increasingly sophisticated missions to the Moon. Future plans include a crewed lunar landing and the first lunar space station, known as Gateway. The ultimate goal, however, is for the Artemis program to serve as a stepping stone to Mars.