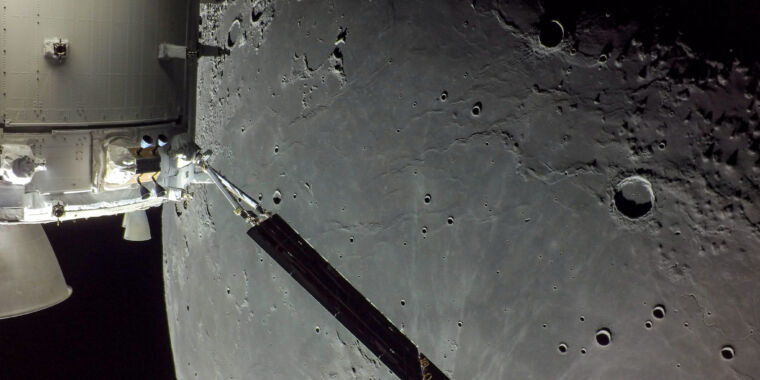 NASA’s Artemis I mission is nearly complete, and so far Orion’s daring flight far beyond the Moon has gone about as well as the space agency could hope. However, to get a passing grade, the mission must still ace its final test.

This final exam will come on Sunday, when the spacecraft starts to enter Earth’s atmosphere at 12:20 pm ET (17:20 UTC). During the course of the next 20 minutes, before Orion splashes down in the Pacific Ocean off of Mexico’s Baja Peninsula, it will need to slow down from a velocity of Mach 32 to, essentially, zero before dropping into the water.

This is no small feat. Orion has a mass of 9 metric tons, about the same as two or three large elephants. Its base, covered with a heat shield designed to slowly char away during passage through Earth’s atmosphere, must withstand temperatures near 3,000 degrees Celsius.

There are two main elements for this reentry that NASA is aiming to test—the performance of this heat shield and of its parachute system. For the mission’s planners, the heat shield is the biggest concern.

“Reentry is our priority-one objective for a reason,” said Mike Sarafin, who leads the Artemis I mission management team. “There is no arcjet or aerothermal facility here on Earth capable of replicating hypersonic reentry with a heat shield the size of Orion. And this is a brand-new heat shield design. It is a safety-critical piece of equipment. It is designed to protect the spacecraft and the astronauts on board. So the heat shield needs to work. We can buy down some of that risk on the ground, but not in terms of coming back at Mach 32.”

NASA tested a boilerplate version of the Orion spacecraft in December 2014, launching it to an altitude of nearly 6,000 km. From that orbit Orion reentered Earth’s atmosphere at a velocity of 9 km/s. For Artemis I, Orion will return at a speed of 11 km/s. That may not sound like all that big of an increase, but for reentry velocity, the increase in convective and radiative elements is exponential as velocity goes up, said Jim Geffre, Orion’s vehicle integration manager.

“So the velocity effect is tremendous, and that’s why the increase in heat load from a low-Earth orbit entry to lunar velocity is so much higher,” he told Ars.

The Orion vehicle flown during the EFT-1 mission featured the same basic ablative material, an epoxy known as AVCOAT that was also used by the Apollo capsules during their returns from the Moon half a century ago. Like the Apollo capsule, this AVCOAT material was injected into honeycombed cells at the base of the spacecraft.

For the Artemis I flight and future missions, however, NASA has changed to a design of “molded” blocks of AVCOAT for the base of Orion. This was done, in part, to make it faster and more efficient to produce these heat shields. Unlike with the honeycomb design, these molded-block heat shields can be built in parallel with the spacecraft’s base, rather than needing to be affixed afterward.

There are 186 different molded blocks on the bottom of Orion, a veritable jigsaw puzzle to cover the bottom of the 5-meter-wide spacecraft. Sunday’s reentry will test the design of NASA’s method to fill in seams and gaps between these molded blocks.

Another key element of Orion’s reentry involves deployment of its parachutes at about 1,600 meters above the surface of the Earth. These chutes are intended to slow Orion down to a velocity of 30 km/h as it drops into the ocean.

However, unlike with Orion’s heat shield, NASA officials believe they have adequately characterized the risk for the parachutes through an extensive test campaign. Geffre said that to date, NASA has performed 47 drop tests done of Orion’s parachute system.

NASA announced Thursday that it plans to land Orion farther south in the Pacific than previously anticipated. This is due to poorer weather conditions farther north, off the coast of California. As a result, Orion will splash down near Isla Guadalupe, which is about 240 km west of the Baja Peninsula in Mexico.

As part of its descent, Orion will follow a skip entry technique instead of a direct descent followed by the Apollo missions. This will allow Orion to land closer to the coast and subject astronauts to lower gravitational forces—about 4 Gs—than occurred during the Apollo reentry.

NASA will provide live coverage of Orion’s return on Sunday beginning at 11 am ET (16:00 UTC), with splashdown expected at 12:40 pm ET.