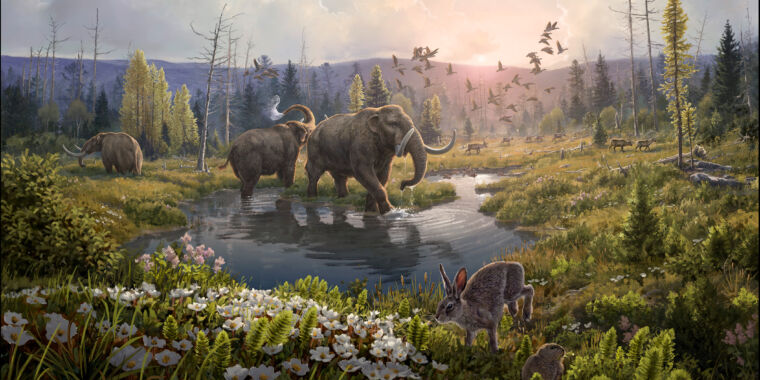 When once-living tissue is preserved in a cold, dry environment, fragments of its DNA can survive for hundreds of thousands of years. In fact, DNA doesn’t even have to remain in tissue; we’ve managed to obtain DNA from the soil of previously inhabited environments. The DNA is damaged and broken into small fragments, but it’s sufficient to allow DNA sequencing, telling us about the species that once lived there.

In an astonishing demonstration of how well this can work, researchers have obtained DNA from deposits that preserved in Greenland for roughly 2 million years. The deposits, however, date from a relatively warm period in Greenland’s past and reveal the presence of an entire ecosystem that once inhabited the country’s north coast.

Over the last million years or so, the Earth’s glacial cycles have had relatively short warm periods that don’t reach temperatures sufficient to eliminate the major ice sheets in polar regions. But before this time, the cycles were shorter, the warm periods longer, and there were times the ice sheets underwent major retreats. Estimates are that, around this time, the minimum temperatures in northern Greenland were roughly 10° C higher than they are now.

During this period, a set of deposits called the Kap København Formation was put in place in what was likely to be an estuary environment. Some of the layers of this deposit are likely to be sediments that washed into the area from a land-based environment, and other layers are sandy and were likely laid down by salt water.

Studies of these deposits have found pollen from various plant species and a handful of animal fossils. These indicate that more species were present in this past ecosystem than are presently found in northern Greenland, but it’s unclear how representative the finds are. Pollen can travel long distances, for example, and only a fraction of the animals are likely to be preserved.

So, a large international team decided to find out whether they could learn more about the ecosystem using environmental DNA. While Greenland remained warm for some time after these deposits, it was only relatively warm; winter lows were still well below freezing. And, for hundreds of thousands of years, the area has generally been about as cold as you would expect an area near the border between the Atlantic and Arctic Oceans would be.

The researchers then attempted to figure out just how old these deposits are. Based on a magnetic field reversal that occurred as the Kap København Formation was being laid down, they concluded that it was deposited either 1.9 or 2.1 million years ago—reasonably close to past estimates of 2.4 million years. They then plugged that age and the local climate conditions into software that estimates the amount of damage the DNA should accumulate. This suggested that there should only be a tiny fraction of the damage the DNA would have picked up in a warmer climate—damage was likely down by more than 700-fold.

The researchers argue that the minerals in the deposit interact with DNA, pulling it out of a solution and protecting it from any environmental enzymes.

Why Kareem Abdul-Jabbar is ‘thrilled’ LeBron James broke his NBA scoring record: ‘His winning in no way affects my winning’