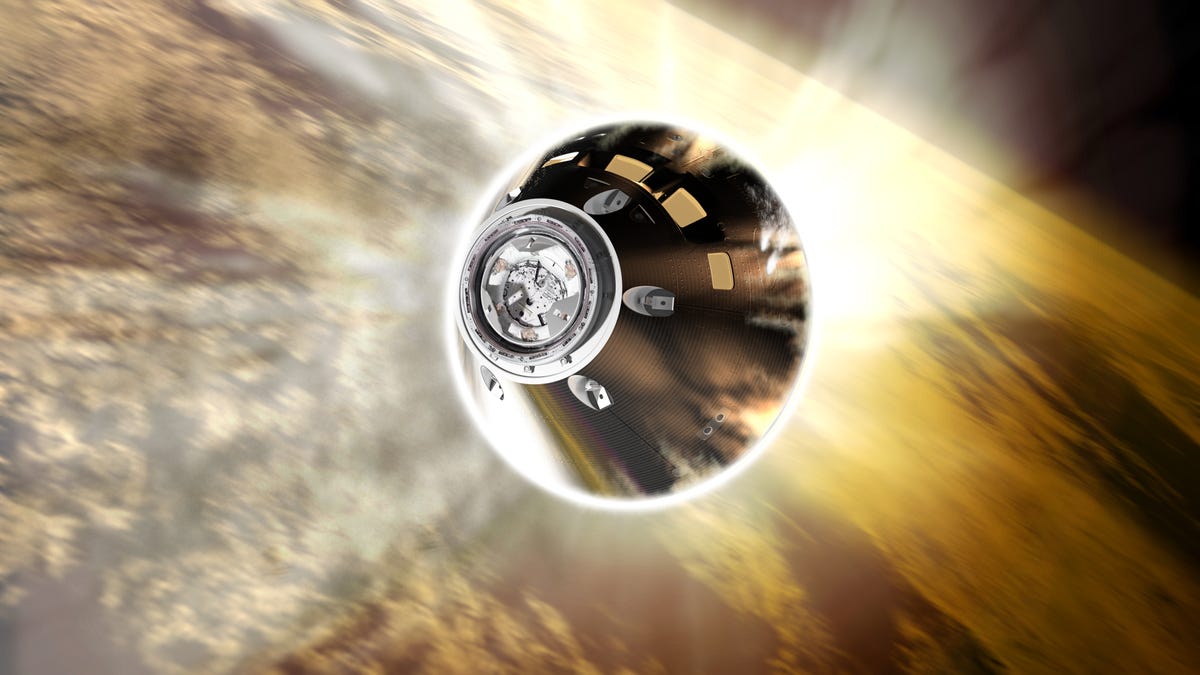 The Artemis 1 mission is coming to an end, but that doesn’t mean the hard part is over. The uncrewed Orion spacecraft, currently on its way home from the Moon, must still survive a harrowing reentry through Earth’s atmosphere if it’s to perform a successful splashdown in the Pacific Ocean. NASA is hoping that a new technique, known as a skip reentry, will assist the capsule during the final leg of its long and historic journey.

Orion is on course to arrive back at Earth on Sunday, December 11, after a successful lunar flyby earlier this week. On the 26th and final day of the Artemis 1 mission, NASA’s $20.4 billion spacecraft will ram into our atmosphere at speeds reaching 20,000 miles per hour (32,190 kilometers per hour)—the fastest for any crew-rated spacecraft in history.

“When Orion re-enters Earth’s atmosphere in just a few days, it will come back hotter and faster than ever before—the ultimate test before we put astronauts on board,” NASA administrator Bill Nelson said in an Artemis mission blog post. “Next up, re-entry!”

Orion is equipped with an innovative heat shield that’s designed to withstand the expected 5,000 degree Fahrenheit temperatures on reentry, but NASA is also counting on the skip reentry procedure, in which the spacecraft will “bounce” off our atmosphere and temporarily return to space before performing a second reentry. As NASA pointed out last year, “It’s a little like skipping a rock across the water in a river or lake.”

This has never been attempted before with a capsule built for human passengers, but it should lessen the aerodynamic breaking loads, resulting in lower temperatures, lessened g-forces, and a smoother ride. For this inaugural mission, Orion features no crew, but three manikins—Helga, Zohar, and Campos—are currently on board and collecting valuable data. Artemis 1 is a demo mission that’s meant to set the stage for the planned crewed Artemis 2 mission.

What’s more, the Artemis program as a whole is serving as a stepping stone to Mars (yes, plenty of rock-related metaphors in this article). NASA’s intention is to use Orion for crewed missions to the Red Planet, but instead of returning at Mach 32 (as Orion is poised to do upon its return from the Moon), Orion will return from Mars at speeds reaching Mach 36 , as Nelson told reporters on August 3. “We’ve got a lot of testing to do,” he said, hence the importance of the upcoming reentry.

During the skip reentry, controllers will roll the capsule to create lift, raising the capsule back into space, Judd Frieling, Ascent and Entry Flight Director at NASA, explained during a press briefing held yesterday. After that, they’ll roll the vehicle such that it’ll resume its descent. This two-for-one approach will break-up Orion’s reentry into two phases, as opposed to a single deceleration event. Splitting it up in this way should lessen the burden placed on the heat shield and lessen internal g-forces.

As noted, this will be the first time that a true skip reentry will be performed on a crew-rated vehicle. The Apollo 11 Command Module employed a skip-like technique to prolong reentry time, but it did not leave the atmosphere. That said, the Soviet Union conducted successful skip entries with its ZOND spacecraft, which were never meant to host human crews.

As Orion resumes its speedy return to Earth, heat-induced plasma ionization will result in a blackout period. Three small drogue parachutes are set to deploy when Orion is roughly 24,000 feet above the surface, while the main parachute is set to deploy at 6,800 feet. In all, Orion’s 11 parachutes will take the craft from 350 mph (563 km/hr) to 20 mph (32 km/hr). So from start to finish, Orion’s speed will go from 20,000 miles per hour down to the expected 20 mph—“that’s a lot of energy that we’re dissipating,” Frieling said.

The skip entry technique will also make it easier for NASA to pinpoint the place where it wants Orion to perform its splashdown. This posed an issue during the Apollo missions, in which returning Apollo Command Modules could venture up to 1,725 miles (2,776 km) away from the point of atmospheric entry, according to the space agency. The consequence of this wide range was that multiple U.S. Navy ships had to be stationed at remote locations along the expected trajectory to perform recovery operations.

Skip reentries allow for far greater precision across a much larger range—a 5,524-mile-long (8,890-km) range, to be exact. “We extend the range by skipping back up out of the atmosphere where there is little to no drag on the capsule,” Chris Madsen, Orion guidance, navigation and control subsystem manager, said in a statement. “With little or no drag, we extend the range we fly,” he explained. “We use our capsule lift to target how high we skip, and thus how far we skip.”

NASA is currently targeting an area approximately 50 miles (80 km) off the coast of San Diego, California, for splashdown, but should extraneous circumstances, such as a large storm, preclude that spot, the space agency can target locations far away. The planned recovery of the capsule is thus set to be far easier and more efficient than it was during Apollo, as there’s no need to deploy multiple teams across the vast space of the ocean.

“The skip entry will help Orion land closer to the coast of the United States, where recovery crews will be waiting to bring the spacecraft back to land,” Madsen said. “When we fly crew in Orion beginning with Artemis II, landing accuracy will really help make sure we can retrieve the crew quickly and reduces the number of resources we will need to have stationed in the Pacific Ocean to assist in recovery.”

Orion is expected to splashdown in the Pacific Ocean at 12:40 p.m. ET on Sunday. Fingers are firmly crossed that the recovery teams will have something to recover.