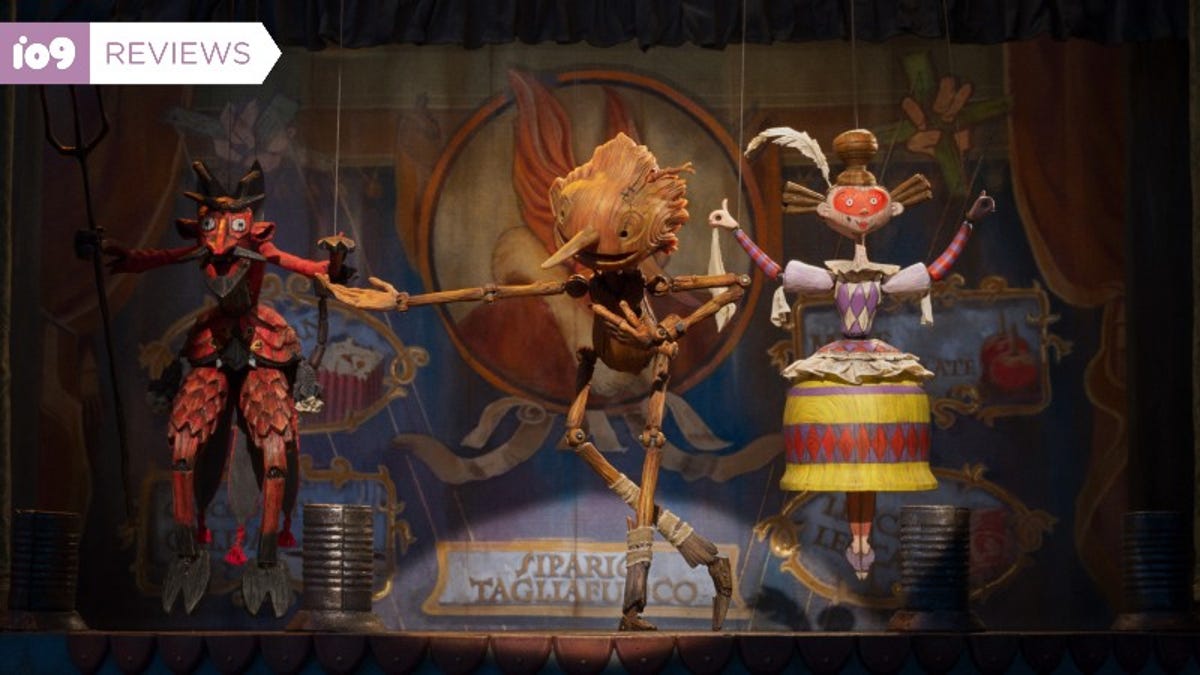 To say that Guillermo del Toro’s Pinocchio is unlike any Pinocchio story you’ve ever seen seems pretty obvious. Going by del Toro’s previous work, it’s also pretty obvious to assume the movie is darker and more messed up than previous dark and messed-up versions of the story have been. What might be less obvious, however, is how well del Toro balances new story threads and dark imagery with that crucial idea that has kept Pinocchio relevant for over 100 years—the love between a parent and a child—and how much harder it lands in this film because of his take.

Guillermo del Toro’s Pinocchio arrives on Netflix today (stream it here) and it’s directed by both the Oscar winner as well as Mark Gustafson from a screenplay by del Toro and Patrick McHale. This means, title aside, this is not just a Guillermo del Toro movie. The trademark style and vibe he made famous with films like Pan’s Labyrinth, Hellboy, and The Shape of Water can be felt throughout, though. That’s in large part due to the fact this version of Pinocchio is told with stop-motion animation, giving it a tactile, lived-in, stand-apart feel even the best of the other adaptations can’t touch.

In the grand scheme of things, this Pinocchio has all the big story beats of the Pinocchios we know and love (or hate). A narrator and friend of the characters, Sebastian J. Cricket (Ewan McGregor), tells the story of a woodworker named Geppetto (David Bradley) who creates a marionette named Pinocchio (Gregory Mann) which is magically brought to life. Pinocchio is then exploited by a carnival worker, here named Count Volpe (Christoph Waltz), and when Geppetto goes to find him, gets swallowed by a giant whale. That’s all in there and more.

At almost every single turn though, del Toro dives deeper into the motivations of these big, well-known moments, adding context, clarity, and even some surprises. For example, the reason why Geppetto makes Pinocchio is he lost his young son, Carlo, in a bombing. Pinocchio also dies multiple times and visits an afterlife where he learns he’s actually immortal, but at a cost. Oh, and all of this is set against fascist Italy of the 1930s where Mussolini is even a character. Yeah, shit gets pretty intense.

But along the way, del Toro and his team never lose sight of the core ideas, weaving them in and out of the film. Pinocchio is not just a young boy, he’s a completely blank slate. So his viewpoints on the world and discoveries of life’s little pleasures always ring true and give some levity to the cruel world around him. There’s also that heartwarming love between a parent and child, which makes some of the hardships the characters endure feel more manageable. If anything, the biggest issue with Pinocchio is that the middle of the film loses a bit of that balance as Pinocchio goes off on his adventures with Volpe. However, as the film reaches its conclusion, everything focuses back up, paying off with a heartwrenching ending that encompasses not just the ending you know, but takes things in an unforgettable and haunting direction. The power of the ending is only achieved because of the ways the film explores the world and characters like never before.

Along the way, characters voiced by incredible actors such as Tilda Swinton, Ron Perlman, Finn Wolfhard, Cate Blanchett, John Turturro, and Tim Blake Nelson give Pinocchio’s journey an extra level of gravitas. It’s the lead though, Gregory Mann, who really steals the show. His voice is perfectly suited to a Pinocchio like this, because it’s so innocent and adoring, it makes everything happening to the character somehow darker by comparison. He’s the voice personification of the film itself.

Blending incredible stop-motion animation and top-notch voice work with a surprising spin on a tried-and-true tale, Guillermo del Toro’s Pinocchio is a winner. It might not be the stone-cold masterpiece we’ve come to expect every time del Toro gets behind a camera, but it’ll be a movie audiences of all ages hold in their hearts for years to come.

Pinocchio is now streaming on Netflix.