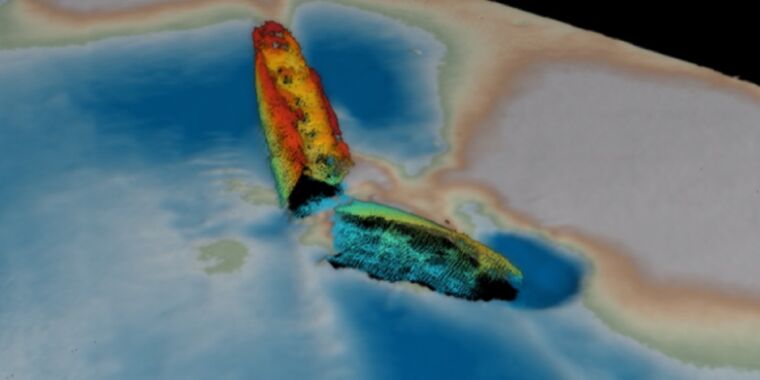 Before the RMS Titanic struck an iceberg and sank to the bottom of the Atlantic Ocean in April 1912, the ship’s wireless operators received multiple warning messages of icebergs, growlers, and field ice from six other ships in the region. Now, researchers at Bangor University have identified the wreck of one of those ships in the Irish Sea: the SS Mesaba, which sank in 1918 after being torpedoed by a German submarine. It’s one of 273 ships mapped and mostly identified in that 7,500-square-mile region, using a state-of-the-art technique called multibeam sonar.

As we’ve reported previously, Titanic set out on her maiden voyage to much fanfare on April 10, 1912. Among other amenities, there was a shiny new wireless telegraph system on board, courtesy of the Marconi International Marine Communication Company, capable of transmitting radio signals over a radius of 350 miles (563 kilometers). Although its purpose was mostly to send so-called “marconigrams” for the ship’s wealthiest first-class passengers, operators Jack Phillips and Harold Bride also handled any messages from other ships—notably weather reports and ice warnings.

Phillips and Bride had been receiving ice warnings from other ships all day on April 14, beginning at 9 am with reports of “bergs and growlers and field ice” from RMS Caronia. Later that day, RMS Baltic warned that a Greek ship had reported “passing icebergs and large quantities of field ice.” Captain Edward Smith acknowledged receipt of both messages and shifted course a bit further south in response, but he didn’t reduce the ship’s speed.

The SS Amerika reported passing two large icebergs, while the SS Californian sent messages regarding “three large bergs,” and the Mesaba sent a message reporting “much heavy pack ice and great number large icebergs. Also field ice.” Alas, Smith never received those later messages, apparently because an overworked Phillips was frantically trying to catch up on passenger marconigrams after a breakdown of the equipment the day before. In fact, Phillips’ response to the Californian‘s final warning later that night was a frustrated, “Shut up! Shut up! I’m working Cape Race!” (referring to the relay station at Cape Race, Newfoundland). The Californian‘s radio operator then shut the system down for the night and retired to quarters.

The rest, of course, is maritime history. At 11:40 pm ship’s time on April 14, Titanic hit that infamous iceberg and began taking on water, flooding five of its 16 watertight compartments, thereby sealing its fate. As the lower compartments of the ship filled with water and the crew rushed to evacuate as many passengers as possible into the limited number of lifeboats before the ship sank, the wireless telegraph operator sent out a series of increasingly frantic Morse Code messages. Only around 710 of those on board survived the sinking.

Most people are familiar with modern sonar (short for sound navigation and ranging) and how it works. It has been a well-established maritime tool since its development during World War I, although Leonardo da Vinci was (once again) way ahead of his time, having experimented with a tube inserted in water to detect vessels by ear in 1490. Regular single-beam sonar uses just one transducer that emits acoustic signals, whose returning echoes are then detected to determine the range and orientation of an object.

By contrast, as its name implies, multibeam sonar boasts several physical sensors in a transducer array and emits multiple simultaneous acoustic signals in a fan-shaped pattern. This technique can measure the depth of the sea floor (bathymetry) and the backscatter, which indicates the intensity of the returning echoes detected by the array. This is useful both for figuring out the geological makeup of the sea floor and for spotting objects like shipwrecks, since different kinds of materials—for example, hard rocks as opposed to softer mud—reflect sound differently. The end result is a colorful 2D or 3D map visualizing the sea floor and any objects in the vicinity.

Bangor University team member Innes McCartney is the author of a new book (Echoes of the Deep) describing the discovery of the Mesaba and over two hundred other shipwrecks—trawlers, cargo vessels, submarines, and the largest ocean liners and tankers—all mapped by multibeam sonar. To date, 87 percent of those ships have been identified by cross-referencing the data on dimensions, geographic position, and archival descriptions of the sinking of each ship against a UK database of wrecks and other sources.

Per McCartney, this validates a technique he views as a “game changer” for marine archaeology, analogous to the impact of aerial photography on landscape archaeology. “Previously we would be able to dive to a few sites a year to visually identify wrecks,” he said. “The Prince Madog’s unique sonar capabilities has enabled us to develop a relatively low-cost means of examining the wrecks. We can connect this back to the historical information without costly physical interaction with each site. It should be of key interest to marine scientists, environmental agencies, hydrographers, heritage managers, maritime archaeologists, and historians.”