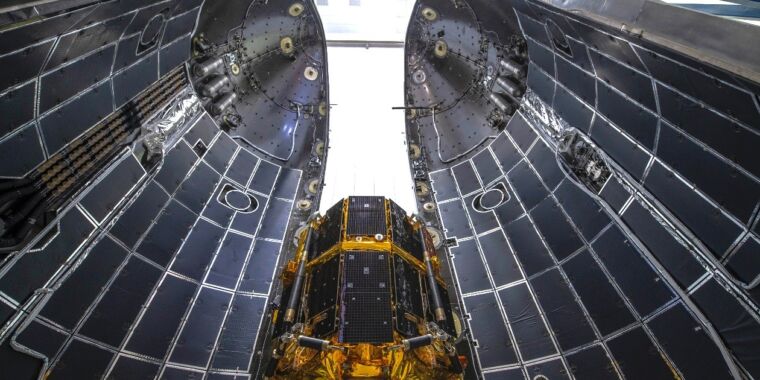 It has been a busy second half of the year for the Moon. Since late June, three US rockets have launched payloads to the Moon, and one more is set for early Friday morning.

Across these four launches—two on SpaceX’s Falcon 9 rocket, one on Rocket Lab’s Electron, and one on NASA’s Space Launch System—there have been a total of 15 spacecraft sent to fly by the Moon, enter orbit, or land there. The most notable of these, of course, is NASA’s Orion spacecraft, which is due to return to Earth on December 11.

Up next is a Falcon 9 rocket, scheduled to launch at 3:37 am ET (8:37 UTC) from Cape Canaveral, Florida, on Thursday. Its primary payload is a commercial spacecraft and lander known as the Hakuto-R mission, which was developed by a Japanese company named ispace.

The mission was delayed a day after SpaceX said it needed time for “additional checks,” which is a generic term the company uses when it needs more time to address various technical launch issues. This relatively small lander will spend about three months following a long trajectory to reach the Moon, which will allow it to arrive there using a minimal amount of fuel.

With the Hakuto-R vehicle, ispace is seeking to become the first private company to successfully land a spacecraft on another world. And if the company is successful, Japan would become the fourth country (after the United States, Soviet Union, and China) to land on the Moon.

Landing on the Moon is a big challenge. In recent years, efforts by India and an Israel-backed organization, SpaceIL, have failed to make a soft touchdown on the Moon.

Among the payloads being carried by the Hakuto-R lander is the Rashid lunar rover, which was built by the United Arab Emirates. This is a small rover, about 10 kg in mass, and will carry two high-resolution cameras as an experiment to study the stickiness of lunar dust.

NASA is also sending a spacecraft to the Moon on this Falcon 9 launch as a secondary passenger. This small Lunar Flashlight mission, a 6U CubeSat the size of a briefcase, is bound for a near-rectilinear halo orbit around the Moon, similar to the one the private CAPSTONE spacecraft entered earlier this fall.

This mission’s goal will be to look for ice on the Moon. Four lasers will emit near-infrared light that is readily absorbed by water ice. The greater the absorption observed in craters on the Moon, the more ice there is likely to be. This mission should help inform future efforts by robots and humans to explore lunar ice deposits.

As busy as this period has been for the Moon, there is much more to come. During the first half of 2023, two commercial US companies—Intuitive Machines and Astrobotic—are expected to attempt landings on the Moon for NASA. India, Japan, and possibly even Russia also plan to launch missions to the Moon in 2023.

Later this decade, of course, NASA is building its entire Artemis Program around lunar exploration, including human missions and the possibility of a settlement late this decade. China is looking to lead an ambitious program to the Moon as well, with the possible landing of its own astronauts in about a decade.