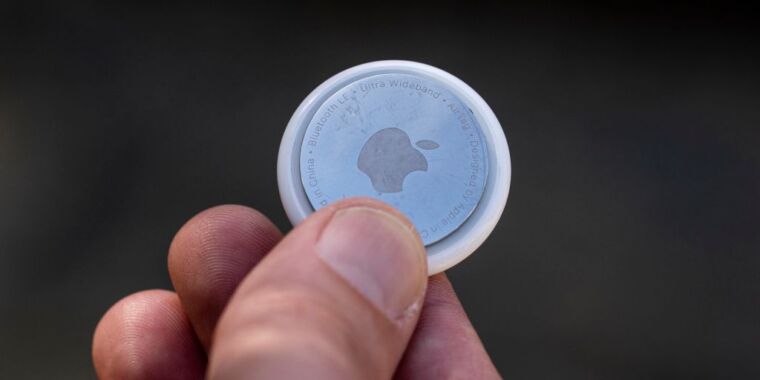 When Apple released AirTags in 2021, the small electronic tracking devices were touted by top executives as being “stalker-proof.” Since then, Vice reported a minimum of 150 police cases documenting stalkers using AirTags, and there have already been two severe stalking cases involving AirTags that ended in murder in Ohio and Indiana.

Confronted by police reports and concerns from privacy advocates, Apple released updates in February, claiming that new features would mitigate reported stalking risks. Stalking reports kept coming, though, and it increasingly seemed to victims that Apple had not done enough to adequately secure AirTags. Now, Apple is being sued by two women who claim that the company is still marketing a “dangerous” product.

In the complaint filed yesterday in a federal court in California, the women suing Apple say that AirTags have become “one of the most dangerous and frightening technologies employed by stalkers.” It has become the “weapon of choice,” they say, because the small size makes the devices hard to detect, the accuracy of Apple’s location tracking is “unparalleled,” and the $29 price is extremely affordable. Victims say that stalkers can effectively track them, and if the device gets deactivated, AirTags are easy to replace at the next opportunity.

These AirTags are supposed to work by emitting Bluetooth signals to Apple’s massive “Find My” network of connected devices, accurately reporting the location of a missing AirTag to the owner. The coat button-size tracking devices can be easily clipped to key rings or dropped in purses to help owners recover lost items.

But the AirTags are also so small that they can easily go undetected, especially when stalkers alter the devices to make them harder to find. For one woman suing, Lauren Hughes, her ex-boyfriend allegedly used a Sharpie to color the AirTag and hide it inside the wheel well of her car. The other woman suing, who remains anonymous out of fear for her physical safety, found an AirTag that her “estranged husband” had allegedly planted in her child’s backpack. When she removed the device from the backpack, it was soon replaced by another.

Lawyers representing the women suing did not immediately respond to Ars’ request for comment.

Apple previously acknowledged “reports of bad actors attempting to misuse AirTag for malicious or criminal purposes,” describing in a blog how the company had partnered with law enforcement to help trace AirTags back to the stalkers who owned them. They also said they worked with safety groups to take other steps to prevent unwanted tracking and promised to release a “series of updates” before the end of this year. So far, Apple has not made any mention on its blog of those updates and did not immediately respond to Ars’ request to comment on whether those updates are still expected to be released in 2022.

The lawsuit Apple now faces is not just about two women being harassed by stalkers using AirTags. It’s a class-action lawsuit that represents all persons residing in the United States who own iOS and Android devices, as well as other sub-classes at risk of stalking.

Plaintiffs suing represent various stalked classes. They are asking for a jury to assess whether, in addition to injunctive relief and damages, Apple should owe punitive damages for allegedly releasing a defective product with insufficient safeguards to prevent stalking, then profiting off sales after allegedly misleading the public to believe AirTags were “stalker-proof.”

“This is problematic for all Class members, as they are unlikely to learn of the dangers associated with AirTags until they have become victims of stalking,” the complaint states.