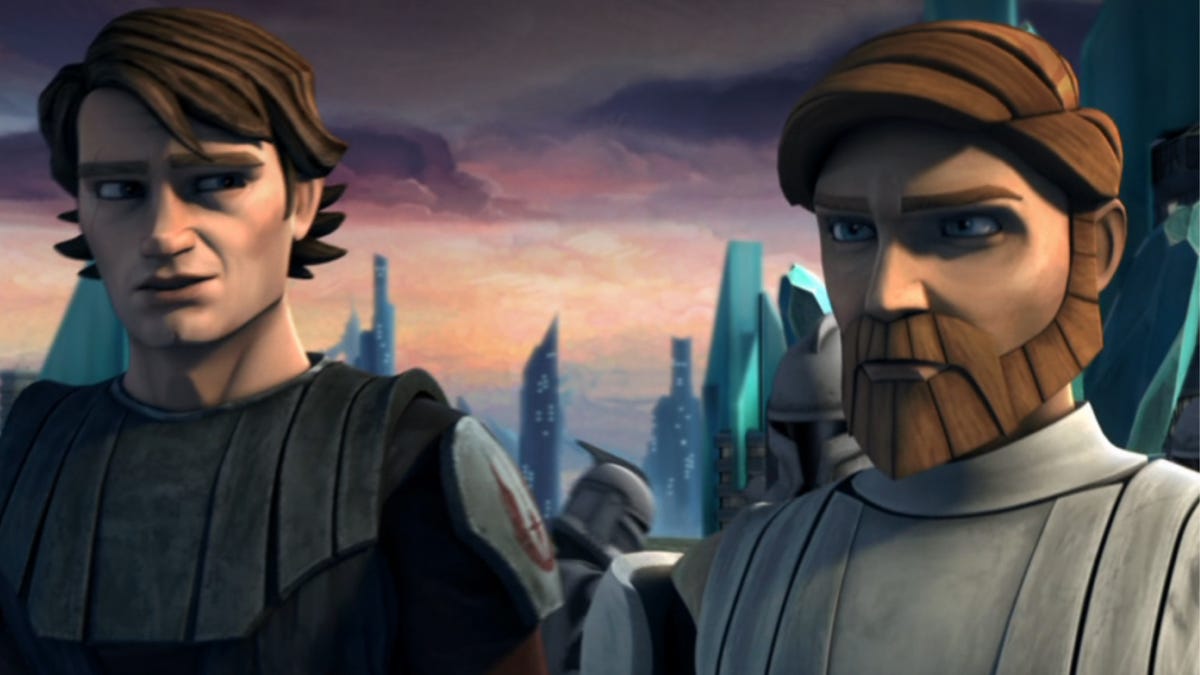 So much has happened to the Star Wars franchise in the last 14 years that it can be difficult to remember that the new canon actually began with Dave Filoni’s Clone Wars cartoon. It was retroactively added into Disney’s new Star Wars stories by virtue of being a pretty good show helmed by the guy who would eventually be the driving force behind Star Wars’ live-action TV series. It can be even harder to remember that The Clone Wars kicked off with a movie—a theatrically released movie—that was absolutely terrible.

The film, released in 2018, came together somewhat literally when then-head of Lucasfilm George Lucas saw the footage of the CG cartoon set between Attack of the Clones and Revenge of the Sith and became completely enamored of it. He suggested a smattering of the earliest Clone Wars episodes together and releasing it in theaters. If you’re wondering, “Wouldn’t that just feel like four episodes of an after-school Star Wars cartoon smashed together instead of a real movie?” you’ve found its first fatal flaw.

While the second, third, and fourth episodes tell one continuous story about the kidnapping of Jabba the Hutt’s son, the first is a standalone story about Republic clones fighting a droid army that necessitates Anakin and his new padawan apprentice Ahsoka hiding in a box and creeping down the street like they’re in a Looney Tunes cartoon (or Metal Gear Solid game). It’s needlessly goofy, but the “main” story is just as goofy and feels even smaller in scope.

Count Dooku has kidnapped Jabba’s infant son Rotta in a needlessly complicated plan to frame the Jedi and get the crimelord to allow Separatist forces to use the interstellar trade routes in his territory. The Republic also wants access to the trade routes, so they send Obi-Wan to talk to Jabba, while Anakin and Ahsoka track down the horrible little slimeball with arms that is Rotta, a.k.a. “Stinky.” What may have worked as three episodes of a cartoon becomes a mess when watched back-to-back, as “plots” quickly arise and resolve themselves. Obi-Wan leaves Tatooine to help Anakin, but Anakin is already leaving when he gets there. Rotta is sick, but there’s medicine on the ship random ship the Jedi commandeer. A bunch of Grievous’ Magnaguards accost Ahsoka on Tatooine, but she kills them with ease.

Speaking of, Ahsoka has since become one of the most beloved characters to not debut in a live-action movie, but I’m not exaggerating when I say she is terrible in the Clone Wars movie. It’s not voice actor Ashley Eckstein’s fault, who does the best with what she’s given. But what’s she given is dialogue written by 40-year-old men who are utterly confident they know how a 14-year-old girl talks. It’s atrocious. She calls Anakin “Skyguy” and R2-D2—who already has a very established nickname—“Artooie.” She’s overconfident and pouty and precocious and smarter than everyone sometimes and dumb as rocks at others.

There’s also Ziro, Jabba’s uncle, who turns out to be partially responsible for Rotta’s abduction. He comes across as a stereotype, speaking Galactic Basic (as opposed to Huttese) with a lisping, high-pitched Southern drawl, based directly on the openly gay author Truman Capote. Ziro is covered in glow-in-the-dark make-up, wears feathers on his head like a 1920s flapper headband, and smokes from a long cigarette holder. Now, whether you’re offended by this or simply delighted by the fact that 2008 Star Wars had any semblance of queer representation is up to you, but there’s still the fact that George Lucas specifically requested that his kids’ movie include a caricature of a writer who died more than 20 years prior.

But that’s hardly Clone Wars’ only adherence to things its young audience wouldn’t know or possibly be interested in. If you’re a fan of the TV series—because it certainly improved in this regard as it went on—you may not remember that the animation and look of Clone Wars was inspired by 1960s British marionette shows like Thunderbirds and Space Patrol. These puppets were visibly wooden and moved in awkward, janky ways, which were lovingly and inexplicably recreated in the 2008 cartoon. Sometimes, I swear you can see the woodgrain in the solid chunks that made up the characters.

Again, thankfully, Clone Wars got better, both in the animation and storytelling departments. Now it’s remembered for how it went on to develop Ahsoka Tano into one of the franchise’s most beloved characters, how it humanized the Clone Troopers, its evolution of the Mandalorians, and so, so much more.. Well, at least until Dave Filoni makes The Book of Boba Fett: Chapter Two, in which Stinky the Hutt returns to claim his father’s throne.