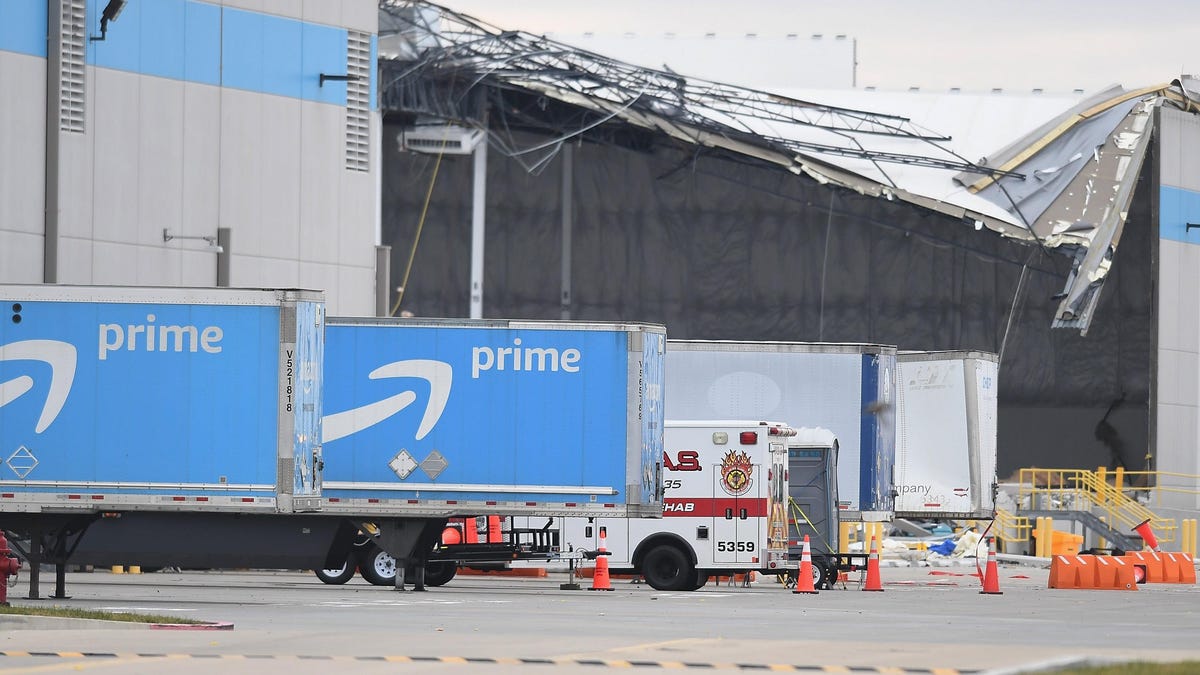 On the evening of December 10, 2021, a tornado tore through the southern Illinois town of Edwardsville. Workers at an Amazon warehouse there were given about 10 minutes to find safety before the tornado hit, with wind speeds of 150 mph. Part of the structure’s 1.1 million-square-foot roof came down and two 40-foot tall concrete walls collapsed.

Six workers were killed. According to lawsuits filed in the wake of the deaths, Amazon managers allegedly told workers they would be fired if they left their jobs to get away from the storm. And while the Occupational Safety and Health administration did not levy any fines against Amazon, the episode has raised concerns about warehouse workers and their safety in severe weather events.

Two of the workers killed were in the district of Congresswoman Cori Bush, a Missouri Democrat who earlier this month introduced legislation that would protect workers during future climate and natural disasters.

The bill is called the Worker Safety in Climate Disasters Act. It guarantees two weeks paid emergency leave for employees unable to work during a “climate disaster,” whether due to road or transit disruptions, family emergencies, personal injury, school closures, or forced relocation.

As climate change continues, work will get harder and riskier for those who work outdoors or work in hourly wage jobs. They are more likely to work in unsafe environments and work in facilities that lack measures to protect workers from heat. As a result, they are more likely to suffer work-related injuries or death due to extreme indoor and outdoor heat.

“This really provides peace of mind and safety for people who are thinking, ‘Do I weather the storm or do I go to work?’” said Denise Garcia, the co-director of Central Florida Jobs with Justice, an Orlando-based worker advocacy organization.

And the disruptions caused by a climate disaster are not felt equally. A 2021 analysis from the Environmental Protection Agency found that low-income and hourly workers would be more likely to be vulnerable to traffic delays from road closures due to flooding or asphalt erosion. The consequences of these delays would also likely cause missed or delayed medical care appointments and losses of wages.

Some private companies have enacted their own “climate leave” policies to provide their workers with paid time off in the event of “extreme weather and environmental conditions due to climate change.”

But outside of select employer policies, there are few to no concrete protections for paid leave for workers across the labor force, particularly those in low-wage service industry or agricultural jobs. And when hurricanes or other natural disasters hit and put workplaces out of commission for weeks at a time, it adds to the economic impact and stress on low-income households.

That’s where the drafters of the Worker Safety in Climate Disasters Act hope to make an impact. “We want to cover everyone, because everyone deserves this as a baseline,” said Saul Levin, the policy advisor for Cori Bush. “And the climate crisis is escalating.”

But many employers continue to demand that their workers show up during extreme weather. In September 2017, Hurricane Irma devastated much of Florida. Central Florida Jobs with Justice, whose work coverage area includes metros of Tampa and Orlando, conducted a workers survey of 134 people in the aftermath of the hurricane, and found that more than half of respondents said their employers threatened to fire or discipline them for not showing up to work during the storm.

“Climate change is happening, and we need to have some protections for people to be able to live with climate change and the negative consequences of it,” said Carisa Harris Adamson, the director of the Northern Center of Occupational & Environmental Health at UC Berkeley. Harris Adamson is nonetheless heartened by the potential impact of the Worker Safety in Climate Disasters Act. “It does show that we’ve learned a bit from [COVID] and are trying to apply some of that to the negative impacts of climate change. And that has to do with taking care of loved ones or kids that are out of school.”

Garcia of Central Florida Jobs with Justice emphasized the broad appeal of this potential legislation. “This is just common sense,” she said, before adding, “it would be very hard to politicize.”