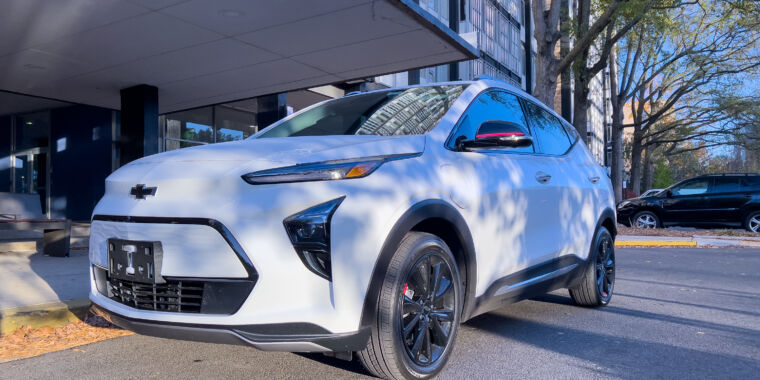 The Chevrolet Bolt doesn’t get enough respect. After early experiments like the hand-built EV1 and the limited-run Spark EV, the Bolt was General Motors’ first mass-produced battery electric vehicle, beating Tesla’s Model 3 to the market and boasting a sub-$40,000 price tag when it launched in 2017. In 2021, the car got a (COVID-delayed) facelift, a price cut, and a second variant, called the Bolt EUV, which had a longer wheelbase and more interior room, plus the option of GM’s Super Cruise hands-free driver assist.

We’ve finally gotten some time behind the wheel of a Bolt EUV, just in time for another price cut in June that sees the price of this is-it-a-hatchback, is-it-a-crossover start at $27,200, making it the second-cheapest EV on sale (after the $25,600 Bolt EV). And other than the fact that its fast-charging ability is not particularly fast, I’m struggling to find reasons to avoid this competent EV.

The original Bolt EV turned out to be a hoot to drive—fit one with slightly grippier tires and it will embarrass a Golf GTI—but it got a bad rap thanks to front seats that some found uncomfortable. More recently, there was a massive recall affecting battery packs built by LG until 2022. Those issues are now behind the Bolt; GM and LG set about replacing the battery in every affected car, giving older-Bolt owners a nice energy storage bump in the process.

So the battery problem should not be a worry with the Bolt EUV. Mechanically, the vehicle uses the same powertrain as the smaller version—a 201 hp (150 kW) permanent magnet electric motor driving the front wheels, powered by a 65 kWh lithium-ion battery pack. That’s sufficient for an EPA-estimated range of 249 miles (398 km), slightly reduced compared to the Bolt EV, perhaps due to the larger frontal area.

In practice, our test Bolt EUV averaged 3.7 miles/kWh (16.8 kWh/100 km), making it one of the more efficient EVs on sale today. Plugged into a 48 A AC charger, the Bolt EUV battery will return to a 100 percent state of charge in about seven hours. But be prepared to hang around a bit on road trips; the Bolt EUV maxes out at just 55 kW.