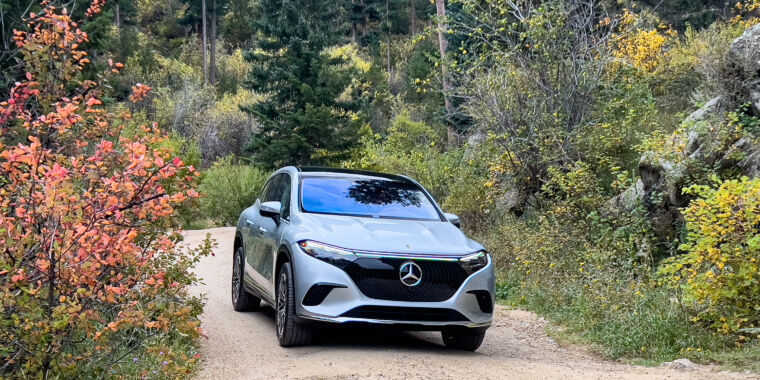 DENVER, Colo.—Mercedes-Benz isn’t really hanging around when it comes to new electric vehicles, all launched under the new Mercedes-EQ sub-brand. It has electrified its popular little crossover, the GLB, to create the EQB, which does everything the gas-powered car does, but much more efficiently. But it has also built an entirely new EV-specific platform called EVA2, for larger, more premium Mercedes EVs. The first of those hit the road last year—its flagship EQS sedan—followed by a slightly smaller, slightly cheaper follow-up called the EQE sedan.

But big sedans don’t sell anything like the way they used to, particularly here in North America. No, Americans want SUVs, particularly if they’re looking for a big luxury one, as determined by the sheer number of Mercedes GLSes I see when I visit California. Mercedes is wise to this, and EVA2 is designed to make SUVs and sedans—as is the case with the 2023 EQS SUV. In fact, Mercedes is so confident of US market sales for the EQS SUV, it builds them in Alabama so they don’t have to be imported.

Mercedes’ first big electric SUV comes to America in three flavors, each with an identical 107.8 kWh usable battery capacity. The $104,400 EQS 450+ SUV features a single rear-mounted, permanently excited synchronous motor, outputting 355 hp (265 kW) and 419 lb-ft (568 Nm) of torque. This is also the longest-legged EQS SUV, using its 107.8 kWh to travel 305 miles (490 km) thanks to a very slippery drag coefficient—for an SUV—of just 0.26. Unfortunately, it didn’t have any of these variants in Denver for us to drive.

Next up in the range is the $107,400 EQS 450 4matic SUV, which equates to a $3,000 premium for a front motor—also a permanently excited synchronous motor, albeit with a clutch that allows it to disconnect from the front axle in some drive modes, which increases efficiency. The EQS 450 4matic SUV generates the same 355 hp (265) kW as the rear-wheel drive 450+ (hence they have the same numerical designation), but the second motor increases total torque to 590 lb-ft (800 Nm). Adding a second electric motor does affect range however, cutting it by 20 miles to 285 miles (459 km).

We tested a 450 4matic and 580 4matic on the same 100ish-mile loop in and around Denver. It excelled when dropped into the city’s morning rush hour traffic. You’re well-isolated from the noise and fumes around you—the infotainment system even has an app to show you the air quality outside and inside the car—and the SUV’s driving position gives you a great view of the road ahead. Plus, the adaptive cruise control driver assist works effectively in the bumper-to-bumper grind.

As the highway opens up and traffic gets light, even the 450 4matic’s power and torque are more than sufficient to reach the speed limit quickly or overtake a slower car. As we were driving without music playing, at highway speed there was enough wind noise from the mirrors to be noticeable but less overall noise than you’d experience in an SUV with a noisy, vibrating internal combustion engine.